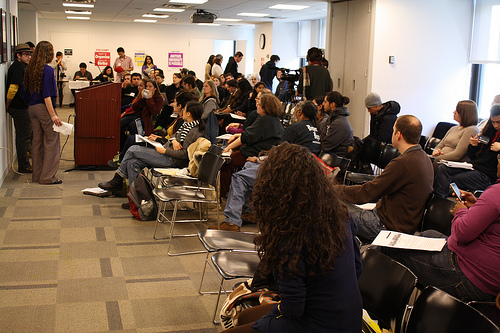 Packed into a conference room in a lower Manhattan office building, members of Occupy Wall Street’s Immigrant Worker Justice Group (IWJ) got to work, trying to set the agenda for how they would tackle a hot button issue that Republicans and Democrats both struggle to answer.

“It’s all about equal rights,” said Donald Anthonyson, 52, of Harlem, a member of IWJ. “When you’re talking about immigrant worker justice, you can’t get justice unless there is some equality. Immigrant Worker Justice is a vehicle to get equal rights.” 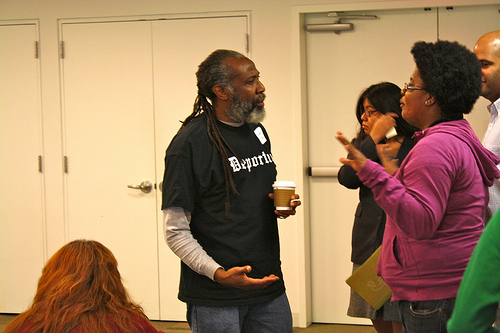 But group membership itself lacks elements of equality, members say. Immigrant communities are left out, and meetings are held during the workweek in various skyscrapers in the financial district.

“A big issue for me is not having meetings in immigrant communities,” said Mark Kushneir, 26, of Prospect Park Brooklyn who helped form IWJ. “I think getting people who are working 6 and 7 days a week, 14 hours a day to come to these meetings, it’s impossible for them to come.”

With no direct immigrant involvement to drive the direction of the group, meeting topics typically steer towards the specific campaigns of the organizations involved – a prison divestment campaign, a boycott on Domino’s pizza, even solicitations to buy tickets for one organization’s fundraiser. With members throwing around the acronyms of the dozens of immigration and labor rights groups in casual conversation, and “twinkling” – moving fingers up and down, in silent agreement– in a measure of “solidarity” with each other, simply communicating in an IWJ meeting is overwhelming to any newcomer.

“Part of the flaws of this whole thing are that if you’re not part of an organization, NGO, or a solid group of people, it’s difficult to participate,” said Kushneir.

Some group members held out hope that two events, a December 11 teach-in and a planned December 18 march from Foley Square to Zuccotti Park, would shift the focus back onto individual immigrant communities.

But Sunday’s teach-in was little more than a staged coalition networking session. There was little discussion of IWJ, or how it could expand into the immigrant communities so underrepresented within. Instead, 10 immigrant and labor rights organizations took to the podium for eight presentations that stretched nearly four hours; IWJ was “teaching” to the choir.

“Organizations are so incredibly focused on what they are doing that they miss a lot of people and miss ways to bridge gaps between communities where there isn’t necessarily a connection,” said Kusneir.

But some members still believe that IWJ can reach out to individual immigrant communities and fight specific cases, such as deportation.

“The Occupy movement is full of thousands of people who are looking for a fight,” said Danny Katch, 36, of Jackson Heights, Queens. “And there is sort of this rare moment, when you have a lot of people saying, I don’t like how this thing usually works, I want to fight that. “

When Hossain entered the United States from his native Bangladesh, his lawyer at the time mistakenly filed his application for political asylum under a different name, leading an immigration judge to dismiss his case on grounds of fraud and setting the stage for his potential deportation.

Hossain, of Woodhaven, Queens, has been in the United States for 18 years, embedding himself in the Queens Bangladeshi community, earning his way as a taxicab driver, and eventually building a family. In spite of all of this, Hossain faced a November 8 deportation hearing, with the possibility of leaving behind all that he had built in his nearly two decades in New York City.

As a part of Hossain’s campaign, Katch looked for ways to extend Hossain’s case outside of the Jackson Heights Queens Bangladeshi community, where Katch said Hossain’s case already had gained tremendous support.

He racked his mind for ways to bridge that gap in order to garner a wider array of public support, which he hoped would pressure Immigration and Customs Enforcement, or ICE, to suspend Hossain’s case.

“Ahmed was going to be facing deportation at 26 Federal Plaza which is only 10 blocks north of Zuccotti Park, said Katch. “So I had it in my head, how do we get Occupy Wall Street involved in this case?”

Through the International Socialist Organization, Katch was put into contact with the IWJ, and after acquiring a spot on the group’s agenda, Katch brought Hossain before the working group to plead his case.

Members sprang into action, planning a march on Hossain’s hearing date, offering guidance, legal aide, and most importantly using their immigrant and labor rights’ organizations’ contacts to lobby politicians on his behalf.

But before the group could march and protest in true Occupy Wall Street fashion, ICE issued a one-year deferral of Hossain’s case. And, despite all of IWJ’s involvement in Hossain’s case, Katch remained skeptical of the group’s affect.

“We’ll never know, because ICE doesn’t tell you why they make the decisions they do, but my opinion is that Immigrant Worker Justice and Occupy Wall Street didn’t have that big of an impact, said Katch. “I have a feeling that, the fact that a bunch of politicians, including Senator [Kirsten] Gillibrand, signed on in support probably had the bigger impact.”

But in order for that potential to take hold, IWJ will have to take further steps to include direct immigrant involvement, a value that Tsedeye Gebreselassie, 32, of Park Slope, Brooklyn sees great value in.

“Trying to fight through the xenophobia and anti-immigrant hysteria to try to get your message across is really tough,” said Gebreselassie. “And one of the best ways to do it is to have immigrant workers themselves get to the forefront of these campaigns.”

Kushneir echoed Gebreselassie’s sentiments, saying that the movement would have to start with organizations, but that the goal is to move away from that emphasis and into immigrant communities.

“They [organizations] are going to be focused specifically on doing it one way,” said Kushneir. “Whereas if we approach immigrants independently, the potential I think, is really endless.”