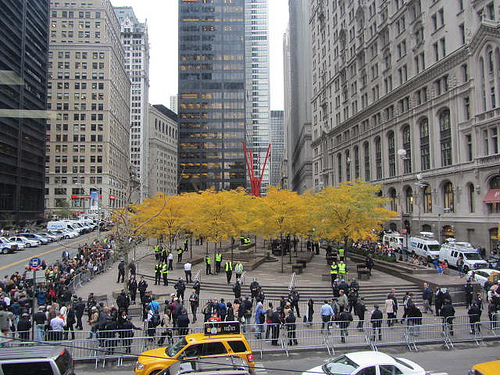 Zuccotti Park was barricaded off by police today, as protestors who were evicted last night gathered around the perimeter. Photo by Chris Palmer

Today was the most turbulent day of Occupy Wall Street’s two month existence, with protestors being forced out of the park overnight by police and then engaging in marches, standoffs and non-violent confrontations with police throughout the day.

But amidst the commotion, protestors were eager to express that police crackdowns and attempted evictions will only strengthen the movement as a whole.

“I think it’s like cutting of the head of a hydra,” said Robin Mahonen, 56, from Wheeling, W. Va., referring to the mythical Greek beast. “You cut off one head, but nine more grow back.” 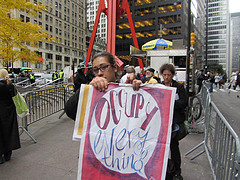 Kristina Acevedo said that despite police action against Occupy Wall Street, the movement will not stop. Photo by Chris Palmer

“You think this is going to stop us?” said Kristina Acevedo, 28, from Jersey City, N.J.

Holding a sign that read “Occupy Everything,” Acevedo circled the barricaded park while whistling at police officers and cheering for fellow protestors chanting against the cops.

“This is going to make (the police) feel better for now,” she said. “But this is still where I occupy.”

While this was the first major police movement against New York’s Occupy site, occupation movements across the country have been under siege in recent weeks.

In Oakland, police raided the Occupy encampment Monday for the second time since late October. The first standoff included tear gas and broken windows. The second was apparently much less violent.

Occupy Portland was shut down over the weekend by police, and protestors have denounced the mayor for authorizing the use of excessive force against occupiers.

Seventeen people were arrested over the weekend at Occupy Denver, and in Philadelphia, Mayor Michael Nutter cited “dramatically deteriorating conditions” while expressing his growing frustration with the protest movement residing outside City Hall.

All of this preceded New York’s surprise raid last night, when police barricaded off the blocks surrounding Zuccotti Park, removing protestors and their tents and tarps. 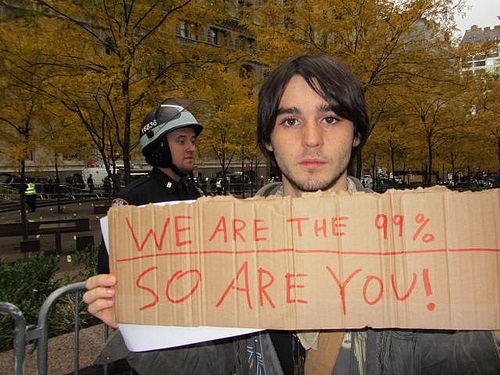 Timothy Gordon said that the police threw away his tent during the raid on Zuccotti Park last night. Photo by Chris Palmer

Timothy Gordon, 20, was at home in Gardner, N.Y., last night, but he said the police took his tent. His friends staying at the campsite told him that the cops were “ruthless.”

“I asked (the police) where my belongings are,” Gordon said. “He said they’re at the dump in Staten Island.”

Chuck Helms, 64, said he would be outraged if police threw out people’s property.

“If they junked them, that’s wrong,” he said emphatically.

“Some people, this was their home, their actual home,” said Acevedo.

“The police are unjust,” Gordon said, wondering aloud how police cars could be emblazoned with the slogan “Courtesy, Professionalism, Respect” while taking his belongings away.

Every time he has left the park, he said, cops have taken his property. So he vowed that he is “never going to part with this (park) again.”

That sense of dedication to the movement was apparent in almost every protestor surrounding the park.

“Every time something like this happens, it gets people outraged,” said Nelson Falu, 36, of Fordham Road, in the Bronx.

He looked over at the park, for the first time in two months filled by nothing other than security guards.

“This was ridiculous,” he said.

“They’re going to make it stronger, I know it,” said Gordon, when asked what the police action will do to the movement.

“If anything, (police action) will invigorate us,” Mahonen echoed.

And despite the blockades and obstacles that stood between protestors and the park they’ve occupied since September, Gordon said once he was allowed back in, his stance would not waver.