On 9/11: A pub is filled with joy in remembrance 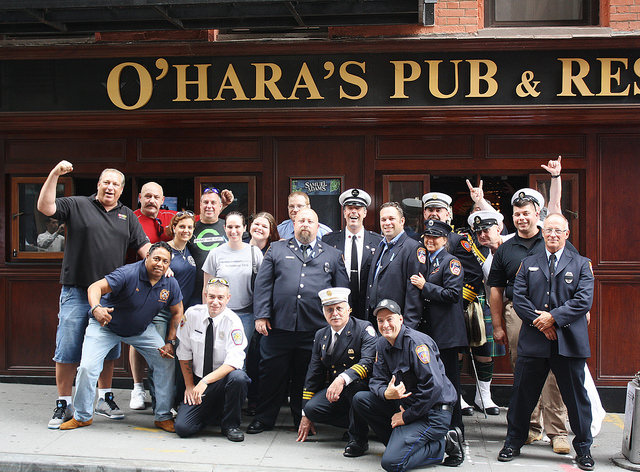 On the 13th anniversary of the 9/11 attacks on the World Trade Center today, a group of first responders celebrated their 12th annual gathering at O’Hara’s Pub, steps from Ground Zero and the newly opened 9/11 Museum.

It seems strange to dub their meeting a celebration, but Sly Brown of the Jersey Shore and his fellow 9/11 first responders have found joy from the past 12 years of new friendship and shared remembrance. The group gathered shortly after the tradition of reading off the names of the nearly 3,000 victims of 9/11 attacks.

Brown, who worked for FEMA during 9/11, explained how their meetings have grown in size over the past 12 years through word-of-mouth and social media.

“This meeting is very special for us,” said Brown, pointing out firefighters, police officers, FEMA workers and other first responders hailing from around the U.S.

Their meeting place hasn’t changed over the years. Its appearance, like most of the neighborhood around Ground Zero, has. As Battalion Chief Don Labanca of the Hamden, Conn. Fire Department pointed out, “when we first started coming the street was still torn up” from the aftermath of the attacks, the pub being just a block away from where the South Tower collapsed.

Inside O’Hara’s, the walls were lined with patches from the uniforms of various first responders, more being added each year, and the bartenders were busy serving a full house.

President Obama’s speech on Wednesday about the rising threat of the group calling itself the Islamic State (ISIS), as well as the heightened security efforts of the NYPD have some wondering if the city is again at risk.

New York City is “still on the list,” said Brown, and that the recent events involving the Islamic State have “made us more observant.” But first responders inside O’Hara’s Thursday afternoon were mostly unperturbed. 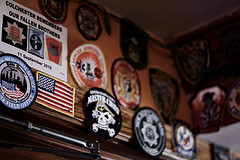 The walls of O’Hara’s Pub, NYC, covered in patches from twelve years of first responder gatherings on 9/11. Photo by Thom Friend.

First responders were invited to this observance for the first decade of 9/11 memorial services. However, they are now shut out due to what city officials called, “space constraints.” Though three years have passed since they were asked to the service, the exclusion still strikes a chord with first responders like Brown.

“It’s very disappointing that we’re not there,” he said.
For Brown and the others, though, it is clear that there will always be a place to come back to each year to honor and remember, but also to celebrate life after 9/11.