Inside this wooden container sits the flag that covered Johnny Kihm's casket when his body arrived at Dover Air Force base. Photo by Chris Palmer.

It was April 19, 2011. Kihm, 51, a freckled, sandy-haired pre-school teacher, was at home in her green-carpeted living room watching the television show “Ellen.”

She opened the door to two Army soldiers, standing in uniform on the concrete steps in front of her brick rowhome in the Castor Gardens section of Philadelphia.

“When I looked at them, heat just went down my body,” she said.

Her baby-faced 19-year old son, Johnny, had deployed to Afghanistan a month earlier. Several members of his unit had died already, including three that week.

She invited the soldiers in. After taking a few seconds to collect her thoughts, she asked them to deliver the news.

Her son was dead, they said. Killed in combat.

During sleepless nights since Johnny had enlisted, Kihm told herself that if this day ever came, she wouldn’t react like characters do in movies. No violent crying, no denial, no hitting the messenger.

She went upstairs to tell her oldest daughter, Marybeth, who was 24 at the time.

Her husband John, just returning from work, collapsed in agony when he saw the two men in his living room. He cried on the adjacent dining room floor.

And Kihm’s middle child, daughter Meghan, who was then 21, threw up after she was told.

“It was horrible,” Kihm said.

This scene – a family torn apart by news of a young soldier’s untimely death – is not uncommon. As of April 28, 2012, nearly 6,500 American soldiers have been killed in Iraq or Afghanistan since the Afghan War began in 2001. Thousands more have died in non-hostile situations, through circumstances like training exercises, illness, or by suicide.

But all military families who lose a loved one have to deal with a variety of unique challenges, according to Ami Neiberger-Miller, a public affairs officer with the Tragedy Assistance Program for Survivors (TAPS).

“The experience of military loss is so unique,” she said.

According to TAPS research, more than 80 percent of military deaths are traumatic and unexpected, catching family members by surprise. Military families are often thrust into the spotlight after the death, forced to take up the role of spokespeople to the media and strangers who want to honor the family and the fallen soldier. And some military family members suffer from insomnia, depression or post-traumatic stress disorder.

“There’s no rulebook to guide families and help them,” Neiberger-Miller said. “It’s a long journey.”

For the Kihms, just over a year after Johnny’s passing, the sadness that comes from being one of those families, shrunken by war, never ends.

At Cardinal Dougherty High School, Johnny ran cross-country and wrestled. But he was especially drawn to the Marines “Delayed Entry Program,” which gives individuals under the age of 18 a chance to work with soldiers to prepare for enlistment at a later date.

Once a week, he trained with the Marines, and throughout high school he dreamed of enlisting after graduation.

In March of his senior year, though, he changed his mind. After high school, he spent a semester at the Abington campus of Pennsylvania State University.

But his interest in the military wouldn’t stay suppressed for long. After his first semester of college, Johnny returned home for Christmas break and told his parents he had made up his mind: he wanted to enlist.

Kihm wasn’t exactly thrilled, but she had told her son when he was in high school that she would support him if he decided to join.

“I knew that’s what he wanted,” she said.

Johnny and his parents considered both the Marines and the Army, and eventually decided that the Army would be a better fit. He enlisted, and on March 1, 2010, deployed to basic training at Fort Benning, in Georgia.

“I really thought he was going to be alright.” 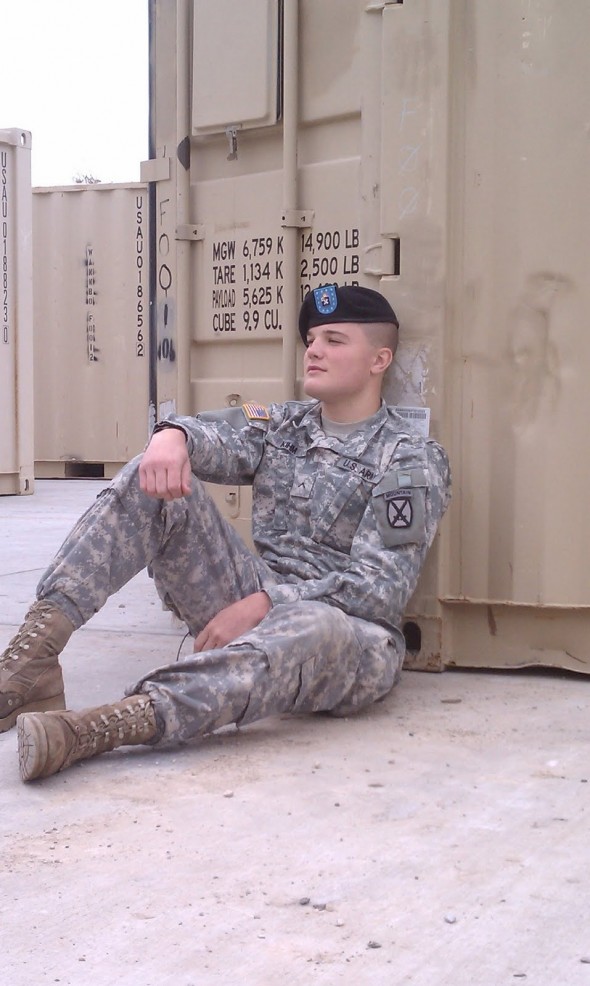 Johnny Kihm in his Army gear. Photo provided by the Kihm family.

In June 2010, after completing basic training, Johnny moved to Fort Drum, N.Y., with the 10th Mountain Division infantry unit. He was supposed to stay there until May 2011, when the unit would be deployed to Afghanistan. But the deployment date was moved up two months. They shipped out on March 17, 2011.

Kihm had two phone conversations and four Facebook chat sessions with Johnny while he was overseas. She kept a record of all the interactions in a datebook.

“I would sit by the computer and just look for that little dot to appear,” she said, waiting for him to sign on to Facebook.

Her last phone call with him was on April 15, 2011. The conversation was brief, but he said they would talk more later.

He died four days after the call.

Before Johnny’s death, the possibility of losing her son never felt real, Kihm said. But now, the reality is inescapable.

“Some days it’s more like day one than day two,” she said.

While the Kihms grapple with Johnny’s death on a daily basis, they have also found various ways to dedicate themselves to new causes in his memory.

John, Johnny’s father, has taken up volunteering at the Philadelphia Veterans Comfort House, a shelter for homeless veterans.

Cecelia sends boxes of supplies – cigarettes, magazines, Red Bulls – to Johnny’s unit (a pack of cigarettes is accompanied by a note, telling the soldier on the receiving end that they have to promise to quit smoking).

One of her more recent efforts was to style pillowcases for the unit members.

And after finding out that the soldiers don’t have anything to put into the pillowcases, she decided that her next goal is to figure out a way to send the troops pillows.

Together, the Kihms established a foundation – the Pfc. Johnny Kihm Memorial Fund – that, among other activities, is raising money through events and t-shirt sales to refurbish a United Service Organizations lounge for military members at the Syracuse airport, near Fort Drum (the Kihms declined to say how much money they’ve raised so far).

And they’ve received countless gifts, tokens of support and donations in Johnny’s name – occasionally from complete strangers – which they in turn donate to the foundation, or use to buy supplies for the care packages.

Ingrid Seunarine, a bereavement counselor in New York City who directs grief counseling programs for Catholic Charities of Brooklyn and Queens, said that it’s common for people to donate time and energy to various causes after the death of a loved one. Doing so, she said, can help individuals cope with the loss, while also honoring the memory of the deceased.

“You have to keep that connection in your heart,” she said.

In the year since Johnny’s death, the Kihms have been visited by scores of wounded warriors and other supporters, wishing to pay their respects to the fallen soldier’s family.

Kihm said she has a deep sense of gratitude for the gestures and the soldiers who go out of their way to support them, especially those in the 10th Mountain Division.

But she also said that at times, unexpected visits, combined with the milestones that pass without her son – Memorial Day, 9/11, his unit’s first extended period of leave – can make it feel “like the viewing day never stops.”

After a few hours of talking about Johnny, with the smell of a home-cooked meal wafting through her living room, the pain in Kihm’s heart surfaced. With her eyes welling up, she recalled a moment that happened at Johnny’s funeral.

During the ceremony, she said, she reached out and touched her son’s closed casket.
Then she put her hand on her husband. Marybeth had her arm around him as well.

Kihm then whispered to Meghan, telling her to reach over and touch Marybeth.

And they formed a chain, linking Meghan, to Marybeth, to John, to Cecelia, to Johnny.

“We were all holding each other,” she said, her voice quivering.

Later that day, the Kihms would bury Johnny at the Holy Sepulchre Cemetery in Northeast Philadelphia.

But at that moment, they sat together as a family for the last time.

“It was beautiful,” said Kihm, fighting off tears.

I remember when I first saw the death notice, I felt weird it was like seeing my own obit, I was in the Navy, Submarines UDT later renamed Seals, and Naval Intelligence, I also have the death notice written by the State of Michigan about Hiram Simpson A relative of mine, he was killed at the Battle of Fair Oaks during the Civil war in 1862, I guess we Kihm’s love the United States are are willing to fight and die for it. I feel for the Kihm’s.

I remember when I first saw the death notice, I felt weird it was like seeing my own obit, I was in the Navy from 1954 to 1962 I was on Submarines, UDT later renamed Seals, and Naval Intelligence, I also have the death notice written by the State of Michigan about Hiram Simpson A relative of mine, he was killed at the Battle of Fair Oaks during the Civil war in 1862, I guess we Kihm’s love the United States are are willing to fight and die for it. I feel for the Kihm’s.