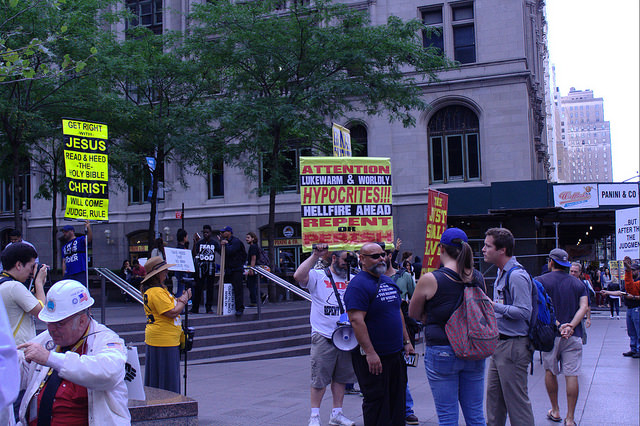 Hundreds of New Yorkers gathered around the 9/11 Memorial today, hoping to get a glimpse of Pope Francis entering the site for an interfaith service with the families of the victims of the September 11 attack. But among the swarm of Pope Francis fans, were several groups of protesters and religious enthusiasts, attempting to persuade the onlookers to “go home and repent.”

The protesters passed around flyers featuring lists of biblical quotes and wore t-shirts that read “You Repent” and “Fear God” printed on them. They shouted into their megaphones at the people passing by, imploring visitors to divert their attention from the pope’s activities and focus on the “truths” of God.

“Jesus Christ died for sinners, not Mary, not Pope Francis, not Pope Benedict, not any priest,” said protestor Don Karns. “A lot of Roman Catholics come out here today. To even be a mile near him they come here and stand in line. But it gives us an opportunity to share the truth.”

One of the big concerns among the protesters was that the pope’s visit would deflect from the word of God that is taught in the Bible. They believed that all of the excitement around the weekend’s events was just a big distraction.

The 9/11 Memorial was not the only place where religious protesters were making noise. Groups like the Westboro Baptists were also seen waving their signs in other areas around the city where people were gathering to see the pope.

But it did not deter thousands of New Yorkers, visitors and tourists, from watching and waiting for the Pope. They waved their yellow and white papal flags and showed off their Pope Francis merchandise, which included t-shirts and buttons with the Pope’s face plastered across the front as well as clever phrases that read “I Love Pope Francis” and “The Pope Gives Me Hope.” Few payed any attention to the shouting protesters.

“These religious people just want a show,” said native New Yorker, Frank Petrino. “They want to make other people realize what they should and shouldn’t be doing.”

Like several other visitors, Petrino was on his lunch break when he decided to head over to the memorial. Being an Italian Roman Catholic, the idea of potentially seeing Pope Francis was an opportunity he did not want to miss, and a few protesters weren’t going to stop him.

“This pope is a very ‘people-person’ and I think he’s making a difference in a lot of people’s lives. I would love to see him,” said Petrino.

Most New Yorkers ignoring the religious rants, but it didn’t deter the protestors from standing on the curbsides for hours and preaching their beliefs, hoping that there might be a few people in the crowds willing to listen to their message.

“We prayed before we came here that somehow God would give them ears to hear and change their heart today,” said Karns.