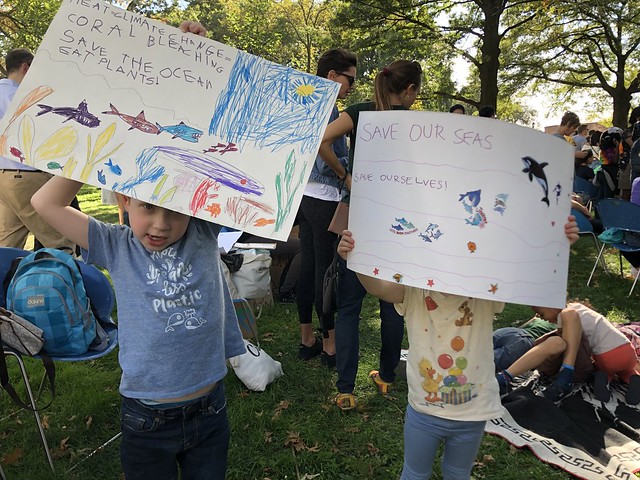 Marisa Wolfson and her children (pictured here) made handmade signs Thursday night. As marchers entered the Battery Park on Friday, Gabriel, 7, (pictured left), stood on a chair and held his up his poster. This is the family’s second time participating in a climate march. Photo by: Maureen Mullarkey

Gabriel Wolfson can’t vote or drive. But at 6, he cares about wildlife, and wanted to march in today’s climate strike.

“This is the most pressing issue of our time and it’s gonna affect our kids more than it affects us, so we thought we absolutely had to be here, “said his mother, Marisa Wolfson, an Upper West Side mom of two.

As people of all ages protested in yesterday’s climate march, parents seized the opportunity to make it a family event with their young children.

“We talk a lot about the connection between animal agriculture and climate change because that’s not being considered enough” said Wolfson, a film director.. “This is their second march because there was one in our neighborhood last spring. They loved it.”

Earlier this week, NYC DOE announced it would excuse absences for students participating in the march. Carrying handmade signs, students of all ages joined the estimated  60,000 marchers. Some parents felt this was a perfect opportunity to bring their children.

“This is the first march I felt like I could bring my first grade twins to. I’ve been marching alot in the past number of years and always felt like it was a solo mission,” said Lauren Sharpe of Carroll Gardens, who took her daughters from school to march as a family. “I wanted them to see what happens when so many people gather.” 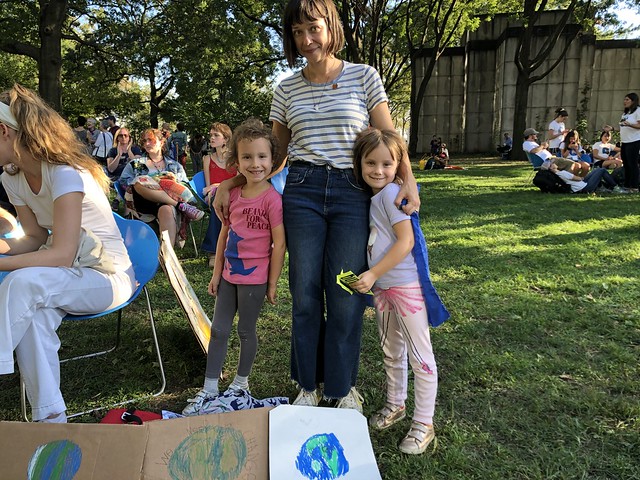 Lauren Sharpe felt compelled to bring her 7 year old twin daughters to the climate march in because it was propelled by students.. Sharpe took her daughters from their Carroll Gardens school Friday afternoon to march as a family to Battery Park. Photo by Maureen Mullarkey

Other families joined the march in Battery Park, after the school day had ended.

“I do think it was important for her to stay in school today because they did a lot of discussion around the subject and were able to make signs,” said Jackie George of Park Slope, who brought her 7-year-old daughter, Analise. “Listening to the news today, she asked me to go. She was really passionate about being here and being a part of the march and representing for kids her age.”

Greta Thunberg, the 16-year-old Swedish climate activist who sailed across the Atlantic to promote environmental awareness, was the headliner of the strike in Battery Park. Families who were seated in a less-populated field of the park rushed into the dense crowd the moment she walked on stage. They cheered as if it were a music concert. 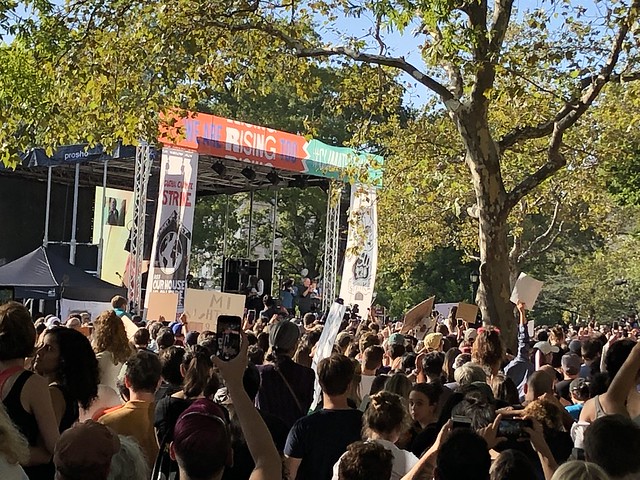 Protestors rush to the stage to with signs, cellphones, and hope to hear 16 year old activist Greta Thunberg speak at Battery Park on Friday. According to the Mayor’s Office, about 60,000 people attended the climate march in New York City. Photo by Maureen Mullarkey

Thunberg’s words served as an inspiration for several young students.

“I think it’s really inspiring how she [Greta] was saying that people just want to take pictures with her,” said Mia Grahm, 12, who came to the march with classmates, a parent supervisor and a teacher. “I think it was inspiring how it was like, well we are actually doing something instead.”

The climate march took place three days before the U.N. Climate Summit on Monday, when world leaders will discuss efforts for environmental actions. Many feel Thunberg’s speech is an obvious message.

“This is the most important issue of our time,” said Wolfson. “This truly is life or death and our kid’s future’s matter. If you’re gonna come out and march, this is what we’re gonna be marching for.”