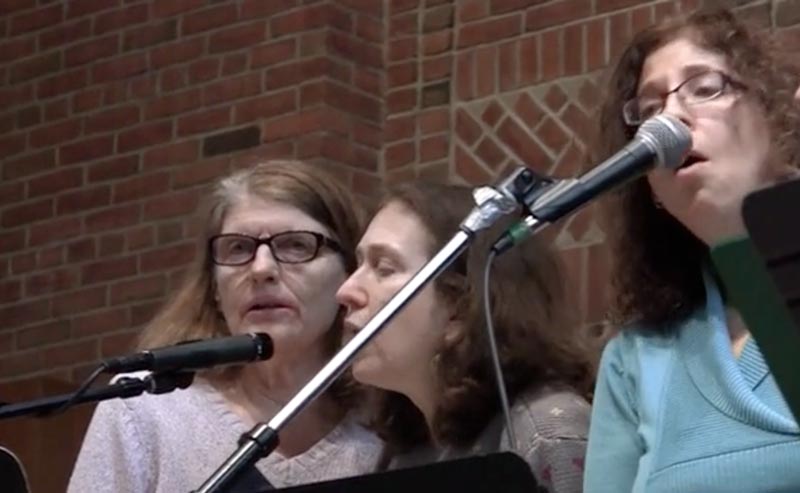 Last Saturday pews full of weekend singers followed along to lyrics projected on a screen as a band of folk musicians worked their way through a set of songs most familiar to any baby boomers in the room.
Community Church of New York in Murray Hill, hosted a memorial sing-along in honor of Pete Seeger, musical legend of the 60’s and 70’s and member of the church. About 400 people attended, many of them with fond memories of Seeger’s music and social activism.

“The way that he could bring people together to imagine a better world, and create that better world, is something that I think we can all aspire to,” said Erika Nonken, who organized the event.

But more than a memorial to the musician, the afternoon became a spiritual experience for many who connect music with community healing.

“Music always is a healing force,” said Sherdina Straugn. Her sister recently passed away.
“It was a wonderful experience being here and meeting people, and enjoying the whole brotherhood of singing together like that,” she said.

For Christie Jeffers, Seeger’s music reminds her of the power and unity of the Civil Rights Movement. In fact, searching for this sense of community was what brought her to the church 11 years ago.
“I joined the church shortly after 9/11, because I realized that community was something I wanted in my life,” said Jeffers.

“The power of his music came from a very quiet place. He’d start with something really beautiful just to entrance you with the beauty of the music,” she said.

Pine Tree performed at the memorial, sharing memories of Seeger in between versions of his well-known songs.

“Pete actually wrote a lot of songs about mortality, about loving and moving on,” she said.
Her next song spoke to exactly this theme.

This article concerned an important subject: Pete Seeger made a difference, and it is good to see him recognized.