Philadelphia Life: Despite population increase, some Amish choose to leave

Jemima King, 28, of Lancaster County, Pa., stands in front of her family's Amish produce stand at Reading Terminal Market in Philadelphia. Despite a recent increase in the worldwide Amish population, some like King choose to leave the religious community. Photo by Jessica Bell

PHILADELPHIA — Bagging crisp, white rice cakes and churning honey roasted nuts into a buttery spread, Jemima King has worked alongside her father at Reading Terminal Market for 17 years, selling everything from produce and preserves to jams and jellies.

She said the business partnership has strengthened their bond both personally and professionally. But today, King is not welcome at his home for Thanksgiving dinner. Nor is she invited to celebrate with him on Christmas day. That all changed the moment she stopped being Amish.

For 25 years, King, 28, belonged to an Amish church in southern Lancaster County, Penn., a tight-knit Christian community that rejects many modern day conveniences and adheres to a strict code of social conduct.

But after years of following church rule, King said she had enough. In 2007, she packed her things and parted ways with her family, her husband and the Amish way of life.

“I respect where I came from,” King said. “I respect the conservative, simple way. But I thought that there has to be something more, and I came to the understanding that there’s more to life than being Amish.”

Despite a significant increase in their numbers this year, the Lancaster Amish — who live just one hour outside Philadelphia and bring much business to the city — must still fight to keep members.

According to 2010 reports from The Young Center for Anabaptist and Pietist Studies at Elizabethtown College, the number of Amish, now 250,000 worldwide, grew 10 percent since 2009. Lancaster County boasts more than 29,000 — the oldest and one of the largest Amish settlements in North America.

Stephen Scott, a research associate at the Young Center, said Lancaster is one of the more successful groups, with a retention rate of 90 percent. Yet he said increased land costs have forced many to take up non-agricultural work in urban areas, where they inevitably interact with “the outside world.”

“This is a relatively recent development that could very well have a strong influence on people leaving, especially young girls who are away from home long hours with a lot of outside contact,” Scott said.

David Weaver-Zercher, professor of American Religious History at Messiah College and author of “The Amish Way,” added that settlements close to big cities are more likely to struggle for members.

“Going to market has been looked down upon; it provides young people socialization,” he said. “Families that mix with the larger world, that instead of farming or have businesses in town go to market in a city, will see a lower retention rate.” 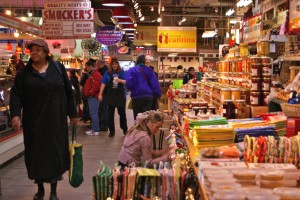 From helping her father stack jam jars to selling goods at the bargain store Bent and Dent, King interacted with non-Amish folk since before age of 11, but never thought of leaving the community. And even after completing Rumspringa — a period of self-exploration when Amish adolescents decide to either join or leave the church — King never questioned the rules of her religious upbringing.

It was not until after three of her six sisters left southern Lancaster that King began to consider other options.

After she moved out, her parents never asked her to visit the five-bedroom house of her childhood; they disapproved of her choice to leave and separate from her husband, who has since left the Amish to join King and their 4-year-old daughter.

“When my first sister left, she wasn’t allowed to come over; they had to mourn,” she said. “Now they’ve learned to accept us at where we are. We’re not a part of their Thanksgiving and Christmas dinners — the ones that left are not invited. But we’ve just learned to accept it. I’m very grateful and thankful that my parents are still talking to me.”

According to Zercher, “Some parents are angry and believe the best thing to do is make that process as painful as possible, which can be difficult and alienating.”

But he added that, like King, many who choose to leave for religious reasons do not abandon their Christian faith.

“It wasn’t materialism that I left the Amish for,” she said. “I don’t have to be Amish to go to Heaven. I was living under a lot a of bondage being Amish.”

Raised in the private, patriarchal and “more plain” part of Lancaster, King –- who now wears rhinestone studs and black leggings rather than white bonnets and calf-length dresses — said fellow churchgoers faced retribution for everything from having a “fancy bathroom” to taking phone calls on the Sabbath.

“The Bishop would go over all the rules of the church, all of the dos and don’ts, down to the nitty-gritty,” she said. “Through all my growing up years, I knew about this God, but the dos and don’ts did not make sense. That stuff really gets me going. It’s what led me to search, to find out what is right and what is wrong.”

Brad Igou, president of the Amish Experience tours and publisher of Amish Country News in Lancaster County, said flexible or rigid church rule has a significant impact on the rate of retention.

“The Amish and the English here are neighbors,” he said of some parts of Lancaster, adding that Amish call all non-Amish people “English.” “As young people grow up, they’re pretty familiar with the outside world that they’re not as enticed by English living. Those communities that are more strict have the most problems, where some members want to rebel.”

But Zercher said children from more separatist groups also have a “bigger jump” to make from being Amish to “English.”

“Even if a girl grows up with an old order, if she’s having a lot of contact with the outside world, she’s gaining the skills to do well if she leaves Amish life,” he said of women like King.

Among the assortment of photos covering her refrigerator door hung a picture her daughter in a blue dress and braided pigtails. The little girl sat smiling atop the knee of her “doddy” — the Amish word for grandfather — who wore a collared shirt and stiff straw hat.

King said she also had a good childhood. She remembered walking one mile to a one-room schoolhouse for class, selling produce at a roadside stand and running through strawberry patches to pick fresh fruit “before the sun got hot.”

“There’s been times I miss just driving down the road in a buggy,” she said. “I miss the little grocery shops and I still look at my daughter’s Amish baby dresses — they’re so cute.”

Still, King said she does not regret her decision.

“It’s drilled into our heads to stay with the church,” she said. “Some people think it’s a heaven or hell issue if you leave. Not all, but some. And they’d definitely take you back — as long as they can see you’re making an effort. They so strongly believe to stay in what you were taught. But I saw a light at the end of the tunnel, and once I made up my mind, there was no going back.”