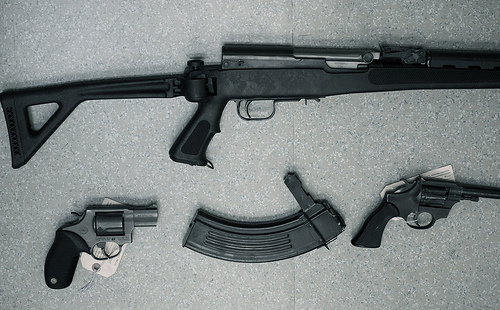 A collection of guns, including the military-grade 7.62mm SKS assault rifle, lie tagged in the Crime Scene Investigation offices in North Philadelphia on Dec. 11, 2010, waiting to be used as evidence against two men accused of killing Police Sergeant Steven Liczbinski during the 2008 attempted robbery of a Bank of America in Port Richmond, Philadelphia. Comprehensive statewide gun policies could potentially make it harder for felons and those without permits to buy and sell such weapons by cracking down on an illegal process known as straw purchasing. (Meredith Bennett-Smith / Pavement Pieces)

PHILADELPHIA – Like a sheriff without a badge, outgoing Pennsylvania Governor Ed Rendell called his career-long quest to stem the gun violence in his state “an abject failure” and “a lost cause” in a conference call earlier this month with Philadelphia reporters. In the Wild West of Pennsylvania state politics, Rendell acted as if the masked robbers had ultimately overrun the general store.

One thing is for sure, however, whether you’re a cowboy or a bandit, you will not have trouble obtaining a firearm in the state any time soon.

Despite municipal homicide rates that are double or even triple the national average, Pennsylvania continues to be one of the easiest places in the country to illegally buy a gun, thanks to a General Assembly too cowed by the state gun lobby to pass reform legislation, said State Representative David Levdansky.

“We have a legislature that is risk averse to do anything that would offend the NRA,” he said.

In 2008 Levdandsky ran up against the politics of gun reform first hand, when he was asked by Governor Rendell to sponsor the Lost and Stolen Amendment. Lost and Stolen is a law that would require gun owners to report their lost or stolen firearms, thereby both absolving themselves of responsibility and cutting down on the black market business of selling “lost” guns for a profit on the street.

Levdanksy, who is white and an avid deer hunter from Westmoreland County in the 39th District, was tapped to prove to the outlying counties that the amendment was in fact a reasonable, “common sense” law that did not infringe on anyone’s 2nd Amendment right to bear arms. But Levdansky’s calls fell on mainly deaf ears, and the law was voted down despite support from the Pennsylvania State Police, Pennsylvania Chiefs of Police Association and Pennsylvania District Attorney’s Association.

“You have what I call the gun rights extremists,” Levdansky said, “Who take the position that they will accept nothing at all. … [They] want to use any piece of legislation that is introduced as a political motivating tool.”

A spokesperson for the NRA-ILA, the branch of the National Rifle Association committed to legislative lobbying, denied the effectiveness of Pennsylvania’s proposed gun bills, stating that they have no impact on cutting down crime, and instead exit merely to make life more difficult for licensed gun owners.

CeaseFirePA, founded in 2007, is now attempting to create some political clout of its own in an effort to finally challenge the NRA for control over Pennsylvania’s guns. Joe Grace, the organization’s Executive Director, said that while he’s disappointed Lost and Stolen did not succeed, the act of even brining it to a vote represents dramatic progress.

“It was the first vote on a gun bill in ten years,” Grace said. “Then we really got to work.”

In the intervening two years, CeaseFirePA has pushed cities across the state to pass their own versions of the state bill, and today 47 different municipalities have some kind of similar ordinance on the books.

“There’s never really been a sustained viable alternative to the gun lobby,” Grace said. “That’s what we’re seeking to build.”

“Folks couldn’t get the issue out of Philly,” he said. In fact, Harrisburg, the state capital, has the highest per capita murder rate in Pennsylvania, and statewide more than 1,200 people die annually from gun-related incidents.

Grace denied that race played a significant part in the political wrangling.

“It is true that a disproportionate number gun homicides involve people of color,” Grace said, “In fact, young men of color. But I think the issue doesn’t really play itself out [in the state capital] as a quote on quote racial issue.”

Racial issue or not, Representative Levdansky does not share Grace’s relative optimism on the subject. Voted out of the Senate in November, Levdansky sees a long uphill battle for gun control advocates following the election of conservative gubernatorial candidate Tom Corbett into the statehouse.

“I think the prospects are dire at this point,” he said, echoing Rendell’s own gloomy predictions.

Corbett has already publicly stated he would sign into law the so-called “castle doctrine” bill if it passed across his desk. Such a bill would expand citizens’ right to shoot in self-defense, a right they already have in Pennsylvania. Governor Rendell vetoed just such a bill in November, believing it would encourage a potentially tragic, “shoot first, ask questions later” sort of mentality, he said.

As the legislature remains paralyzed, guns continue to flood into the state, with more than 4,000 people barred from obtaining a Pennsylvania weapons permit carrying instead a legal permit from a less restrictive state like Florida.