Philadelphia Life: Illegal guns are a way of life in some neighborhoods 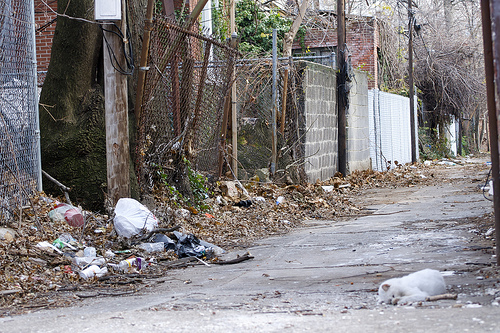 A dead cat lies unnoticed in a trash-strewn alley on the 3000 block of 32nd Street, between Diamond and Fountain in the Strawberry Mansion neighborhood of Philadelphia on Dec. 11, 2010. The neighborhood has been plagued by an influx of illegal guns, a phenomenon that has done little to drive down the area's high violent crime rate. (Meredith Bennett-Smith / Pavement Pieces)

PHILADELPHIA – At first glance the pure white cat seemed asleep, serenely impervious to the empty liquor bottles that encroached on its resting place in a trash-strewn alleyway on the 3000 block of North Philadelphia’s 32nd Street. The cat was in fact dead, a feral victim gone completely unnoticed in North Philadelphia’s Strawberry Mansion neighborhood, an area with a violent crime rate consistently ranked in its city’s top percentile. This dubious honor made more infamous by Philadelphia’s homicide rate, which currently hovers just above three times the national average.

Gun violence is a daily way of life in Strawberry Mansion, where according to several residents, obtaining a pistol is as easy as walking up to a corner and asking for one, and where the specter of violence leaves no one in the community untouched.

Rick Ford knows all about life on North Philadelphia’s streets. Ford was born in raised in this neighborhood. He learned to hustle during the heyday of Philadelphia’s crack epidemic in the 80s and 90s, when at least one murder occurred every day.

“Twenty years ago I was the villain down here,” Ford said, gazing down Diamond Street’s stretch of redundant row houses. As a result of this “street lifestyle,” he also spent a period of time homeless before finally deciding to turn his life around in October of 1990.

Standing outside a local church on a recent Saturday morning, Ford looks more like a politician than a former drug addict. His expressive eyes are muted behind a pair of Armani dark glasses, and his black overcoat and crisp white shirt covers the scars left by old bullet wounds. 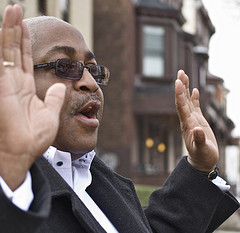 Neighborhood activist Rick Ford, referred to as the Mayor of Strawberry Mansion among this many friends, jokes with a friendly plainsclothes policewoman stopping by to pay her respects in front of a Diamond Street church on Dec. 11, 2010. Ford, who twenty years ago was a local gangster, has since gotten clean and now devotes his life to preventing Strawberry Mansion's youth from traveling down the same violent road. (photo by Meredith Bennett-Smith)

As he stands talking on the sidewalk, various members of the community stop their cars to pay their respects. It’s not for nothing that people in the neighborhood refer to him as the Mayor of Strawberry Mansion.

Today, Ford runs a youth athletic league, is a leader in the community organization Men United for a Better Philadelphia and gives talk at schools about the allures and dangers of guns and gangs.

But in an area flooded with illegal firearms, the temptation for some can be overwhelming — with potentially lethal consequences.

“These kids can get a gun quicker than they can get a job,” Ford said. “If I needed a gun now, I’d just go right to a corner.”

As he said this he pulled out his cell phone with a flourish and dialed his nephew Lance — not the nephew now in jail for murder, but the one, currently at home after his latest stint in prison — to prove how easy it was in fact to find a gun.

Ford concentrates his efforts on the youth of the neighborhood, the kids who have not yet become entrenched in the cycle of crime and recidivism. What frustrates Ford is that the new generation’s motivations for violence seem to be growing ever more trivial.

“What’s all this killing about?” he said. “We’re the only culture killing each other. It’s black on black crime, senseless stuff, senseless nonsense.”

For Ford, sports have the potential to be so much more than a casual game played between teammates. Baseball is a chance to bring kids from different blocks together, to inspire a sense of camaraderie that transcends whether you live on 30th or 32nd Streets, and can be the difference during a territorial dispute turned violent. An argument that might before have been settled with an exchange of blows is now just as likely to include a splattering of bullets.

Tyrone Williams, community liaison for the Strawberry Mansion Neighborhood Action Center (NAC), feels the weight of neighborhood killings just as Ford does. He sometimes finds himself wondering whether he did enough to try and stop them.

“[Violence] cuts through the fiber of the community,” Williams said. “It tears it thread by thread. If the guns weren’t so easy to get, I don’t think these murders would occur. Some people just act differently when they have a gun.”

In an affirmation of the heartless nature of the violence, Williams’ boss at the NAC, Executive Director Lenora Jackson-Evans, had her own son killed in March of this year.

The question of how these guns find their ways so easily from under the countertops of licensed weapons dealers and into the pockets of repeat offenders and teens is a complicated one, with both city, state and national implications. In the past few years, several gun control laws have been proposed in the Pennsylvania General Assembly, only to be voted down in the face of a well-organized, well-funded gun lobby.

Last month’s November elections were not encouraging for advocates of gun control legislation, with the Democratic Party losing its tenuous control of the House and Governor’s Office.

In response many cities, including Philadelphia, have passed their own versions of bills like the Lost and Stolen Amendment, a law meant to crack down on an illegal weapons trafficking tactic known as straw purchasing.

In a straw purchase a buyer who is licensed to own a firearm sells them to unlicensed buyers under the table. A felony under federal law, these transactions provide a simple means for someone without a permit to buy a weapon. The Lost and Stolen Amendment makes this process harder by forcing permit holders to report missing weapons.

Philadelphia’s Lost and Stolen Amendment was passed in 2008, along with four other gun ordinances, all of which were immediately challenged in court by the National Rifle Association. Two were ultimately struck down because of a state preemptive statute that limits the rights of cities to enact their own gun control policies.

“[The ordinance] does some good,” said Martha Johnston, a senior attorney for the Philadelphia City Solicitor’s Office. “But it would be better if it were statewide.”

Gun control ordinances enjoy a diverse base of local support including Mayor Michael Nutter and the City Council, Police Commissioner Charles H. Ramsey and the grassroots organizations that rallied in support of gun reform, including CeaseFirePa, Mothers Against Guns and Mothers in Charge.

According to a 2008 study published by Mayors Against Illegal Guns, in the seven states already enforcing a Lost and Stolen requirement, there is a 67 percent reduction in the number of crime guns traced back to sources within their borders.

Paper statistics aside, all such policies are ultimately only as effective as the extent of their enforcement. 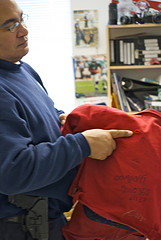 Officer Ed Fidler points to a bullet hole in the shoulder of a mannequin wearing a red, child-sized jacket in the back room of the Crime Scene Investigation unit's offices in North Philadelphia on Dec. 11, 2010. The jacket belonged to a four-year-old boy killed by a stray bullet, and now remains at the 8th and Poplar Street headquarters as a chilling reminder of gun violence's countless innocent victims. (Meredith Bennett-Smith / Pavement Pieces)

Due to circumstances outside of his control such as jail overcrowding, men arrested for violating the Uniform Firearms Act (VUFA), are rarely held for long.

“Why are people with four, five gun arrests still on the street?” Fidler said.

After a six-year stint with a patrol unit, Fidler is now an investigator in the Crime Scene Unit. He is sent to fresh priority crime scenes — a homicide, a discharge of an officer’s weapon or a police shooting — to catalogue and analyze any evidence left behind. More often than not, this includes firearms.

Among your average hustler, 9mm handguns manufactured by Hi-Brite or Bryco are popular because they are small, lightweight and cheap, Fidler said. However, assault rifles like the AK-47 and its knockoff cousin, the 7.62mm SKS, are often favored by drug dealers because of the intimidation factor that accompanies their increased firepower.

Holding up a SKS involved in the 2008 shooting death of Sergeant Stephen Liczbinski, Sgt. Steve Crosby was blunt. This firearm is not meant to hunt deer or anything else, Crosby said sharply.

“This is meant to kill people,” he said.

Sitting later amidst the debris of his cheerfully cluttered desk, Crosby reflected on his own 11-year stint on the force. A former carpenter and electrician, Crosby came across as equal parts tough guy and proud father, reveling in his exploits as a young patrolman while later showing off a photo of his oldest daughter, an aspiring singer and actress.

“The solution is keep them in jail,” Crosby said.

Jail was not the answer for Ford, however. For him, rehabilitation starts with the spirit, not the penal code. “The key to this thing is love,” he said.

“My mother was an alcoholic,” Ford said. “I found my mother on the floor dead. She did the best she could. But I wasn’t getting that ‘I love you.’” 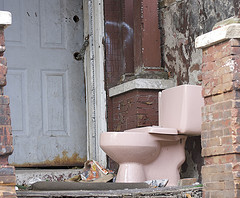 A pastel toilet sits on the crumbling front porch of a decrepit, uninhabitable three-story home on 32nd Street in the blighted Strawberry Mansion neighborhood of Philadelphia on Dec. 11, 2010. The area, situated in the Northern section of the city, boasts one of the highest violent crime rates in a municipality with a homicide rate currently three times the national average. (Meredith Bennett-Smith / Pavement Pieces)

In a neighborhood where fearful gas station attendants fortify their convenience stores, where decrepit, boarded up houses vie for attention with weedy empty lots and grimy take-out windows, hope is a precious commodity.

“I’m tired of the vigils,” Ford admitted. “[Tired] of the teddy bears, the yellow tape. Two nights ago, three people were killed in a ten-block radius.”

He may be tired, but Ford said he’s come too far to give up now.

“The struggle continues,” he said, “But victory is certain.”

[…] rates that are double or even triple the national average, Pennsylvania continues to be one of the easiest places in the country to illegally buy a gun, thanks to a General Assembly too cowed by the state gun lobby to pass reform legislation, said […]

Talk about a Mayor riding the fence on an issue. She should resign. Check the story out here:
http://www.easthavenvine.blogspot.com/