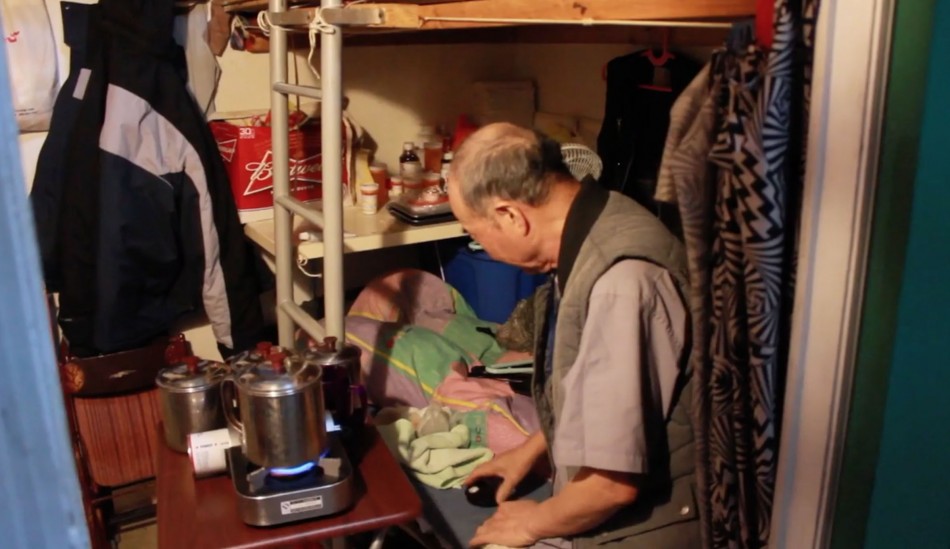 Shut down twice by the city government over the past two decades, 81 Bowery is still popular for the poorest Chinese laborers in New York City. The 40 roofless cubicles on its fourth floor are where the residents call home.

Eighty-one-year-old Liu, or “Grandpa Liu”, as other tenants call him, has been living here for two months. He shares a cubicle with another man and pays $195 per month for rent. For him, moving around is the norm.

“We either don’t speak English, or are undocumented, so we cannot sign leases,” said Liu. “When I first came here, I found a place on Delancey Street, eight of us shared a one-bedroom apartment. I lived there for two years, and then the person who signed the lease was gone. All of us had to move out. It’s like this every time.”

Chinese are the second most undocumented immigrants in the country.

Mae Lee, the executive director of Chinese Progressive Association, said that many of the houses in Chinatown actually don’t have leases because the landlords never offer them one. 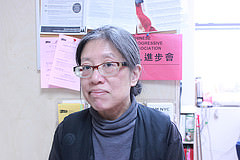 Mae Lee, the executive director of Chinese Progressive Association, said that many of the houses in Chinatown actually don’t have leases because the landlords never offer. Photo by Ellie Miao

“There is a language barrier of course, but many of the migrants also don’t know their rights and don’t know about leases. Especially those who are undocumented, they are more vulnerable,” said Lee. “ I’ve heard cases in which the landlords threatened to turn in the undocumented tenants to the government.”
Liu has moved so many times over the years that he couldn’t name every one of them. He remembers living in three places on Broome Street, the longest stay was seven years, and the shortest was two weeks.

“Rent should be one third of your income, that is the national standard of how you can live comfortably. But in Chinatown the rent is roughly the same as the median household income, which is $2700,” said Lee. “For many migrants, Chinatown is the first place where they come to live. They have nothing and they are paid poorly, but there is just not enough affordable housing in here.”

According to the Asian American Federation of New York Census Information Center’s research, almost one third of the Chinese in New York City live below the poverty line, many do not speak English and have never finished high school. This contributes to living conditions like at 81 Bowery.

No private bathroom, no kitchen and no stove make daily life very hard in 81 Bowery. Liu only cooks once a day and saves the food in the tiny fridge for the rest of the day.

Liu has lived in New York City for 17 years. He grew up in Southern China’s Fujian Province, which is where most Chinese migrants in New York are from. His son was the first one in the family who immigrated to America, followed by his two daughters. Liu and his ex wife, whom he divorced 35 years ago, were the last to come.

“Seventeen years ago, I was still strong enough to work,” said Liu. “Now I’m too old.”
He worked in a nail salon owned by a guy he knew back in Fujian, until five years ago. Now he has a green card, the government gives him $500 per month’s subsidy.

“I have no family here in New York. My son and daughters are in Connecticut,” said Liu. But he would rather stay in New York than living with them in Connecticut. “They all have their own families now.”
Liu is proud of his families. “My biggest grandson is a college graduate,” he said. “He is an engineer and he makes decent money; unlike me, I’m illiterate, I never went to school.” However, Liu said he hadn’t talked to him for years, not even over the phone.

Liu’s best friend in 81 Bowery is Jiang, a 37-year-old construction worker. Jiang has been here for seven years, and never got married. “I live here because it’s cheap,” said Jiang, “I’m still paying back my stowaway fee to the ‘snakehead’.”

Snakehead refers to the infamous Chinese gangsters in New York City who help people enter America illegally. Most of the money Jiang made over the years has been paid to his snakehead, so he has no savings. He lives in a cubicle by himself and pays $250 per month.

Liu is moving out again in late February, to temporarily stay with his friend in Flushing, Queens before going back to China for a visit. He has no idea where to live when he comes back to New York.