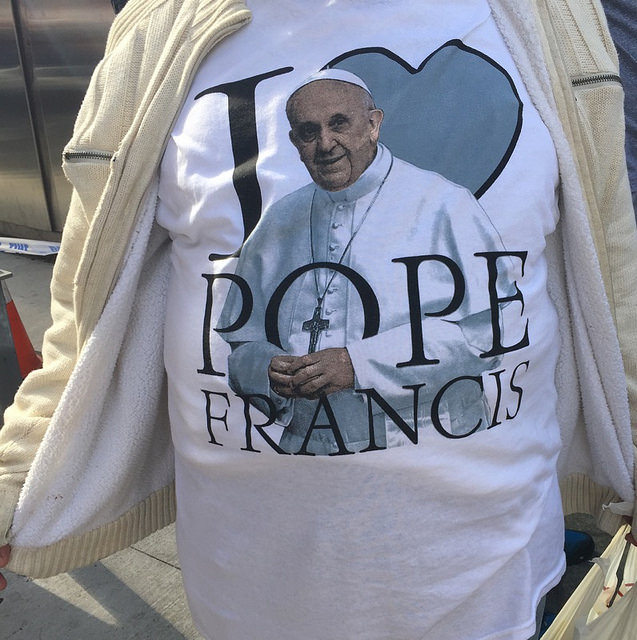 Vinny Matarese, bought a t-shirt in support of Pope Francis. He traveled overnight by train from Providence, RI just to catch a glimpse of the pope at One World Trade. Photo by Leann Garofolo

The intersection of Vesey and West streets in the Financial District, were packed with men and women decked out in $10 street sold Pope Francis t-shirts, buttons, bracelets, and multi-colored rosary beads just after rush hour Friday morning. They were all hoping to catch a glimpse of Pope Francis, even if only just his Fiat.

“I am very Catholic and God is my priority, “ said Elba Mora, of Newark, NJ, just one of the many people who traveled into the city for the occasion. “[The pope] represents God, so I want to see him very close.”

During his second day in the city , the pope delivered a multi-religious ceremony at the 9/11 Memorial, and New Yorkers, tourists and visitors flocked to the surrounding streets in anticipation of seeing him pass by.

“I think the pope’s visit will have a very positive impact,” said Cecil Couto, a Philadelphia, Pa. native selling papal paraphernalia with his wife, Ruth. “He is very likely the most popular person on the planet. He brings a message which is popular to both liberals and conservatives alike.”

Pope Francis is known to be unconventional in his teachings, some of which include absolving women from abortion, not judging homosexuals, and advocating for the acceptance of undocumented immigrants.

Vinny Matarese, a Providence, RI native sported an ‘I love Pope Francis’ t-shirt, and was happy and upbeat despite traveling by train overnight to see the pope.

“For America and also for the whole Catholic Church, I think it’s an uplifting,” said Matarese. “I think it gives America a break from all the politicians.”

Matarese thought young people were in the most need of the pope’s messages to bring them back to their faith.

“I hope to see positive attitudes,” he said of the pope’s influence.

Matarese said he wishes he could speak to the pope himself, quoting his favorite biblical passage. “I would say to him, ‘Be not afraid, as he is always truthful, and love one another as I have loved you.’”

Lucia Galeano, 28, a recent immigrant from the Catholic country of Paraguay, South America waved a Vatican flag and had a “Love Without Limits” button tacked to her shirt. “I think this Pope is very special because he is like, more modern,” said Galeano in her thick Spanish accent. “He left always a good message for like every person. It’s not only for children or for grown-ups, it’s for everybody.” 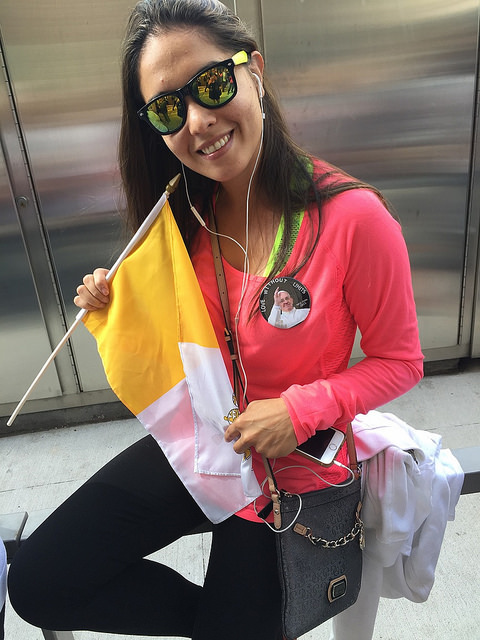 Lucia Galeano, 28, a New Yorker originally from Paraguay, South America, supports Pope Francis. “It’s like the message now is like love is without limits,” she said. By Leann Garofolo

Because of Pope Francis, Galeano is much happier attending mass as a divorced woman.

“After he became pope, people who got divorced could start having the holy bread again,” she said. “He is not against people who get divorced, people who are gay, he always says like, who is he to judge?”

Galeano was nothing short of grateful for the pope’s messages, and is optimistic for the future.