Protestors get inside Republican fundraiser and toss bills 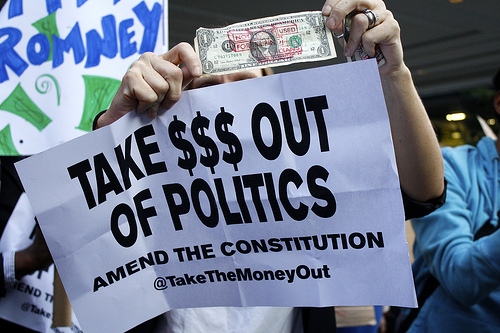 Protestor holds sign and money at Mitt Romney fundraiser on Friday at the NY Hilton. Photo by Daniella Silva

About two dozen protestors gathered this morning outside the midtown Hilton Hotel, site of presidential candidate Mitt Romney’s final fundraiser in the city. They came chanting and bearing signs that read “TAKE $$$ OUT OF POLITICS.” But some were not content to wait outside.

A group of seven snuck quietly through the lobby and up to the third floor grand ballroom, where attendees waited in line. When the protestors reached the registration desk, they turned towards the line.

“Take the money out of politics, amend the constitution!” they chanted. Dollar bills were cast into the air, each stamped with the phrase, “NOT TO BE USED FOR BRIBING POLITICIANS.”

“For a second people didn’t know what to do and then everyone just kind of backed up,” said Tatiana Nobles, 24, a volunteer for the nonprofit VOCAL-NY and one of the protestors.

“I heard someone say that they were probably counterfeit—but they definitely weren’t,” she said. “Others were even picking up the money.” 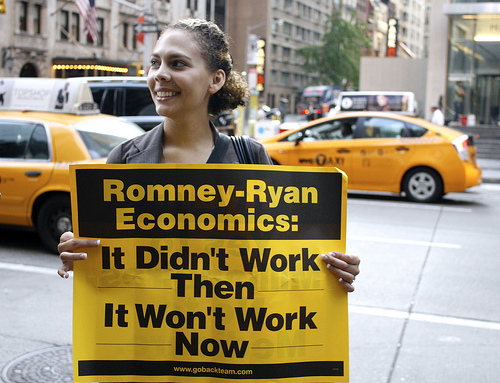 Tatiana Nobles, 24, and other protestors snuck onto the third floor of the NY Hilton, site of Mitt Romney's breakfast fundraiser. The group chanted and threw money as attendees waited in line. Photo by Daniella Silva

Randy Shayler, 61, director of resource management at Otis Eastern Services Inc, was standing in line when it happened.

“It was two or three feet from me,” he said “Most were a little surprised, but it’s New York and free speech is part of the deal.”

Shayler said he personally did not see anyone touch the money.

“People’s reaction was to leave them alone,” he added. “If they want to protest, let them protest.”

Within a few minutes, hotel security escorted the protestors to the elevators.

Outside, about two-dozen demonstrators rallied against candidate Romney’s political platform, the Citizen’s United Supreme Court case, and the influence of money on the political system. A 15-foot puppet named Bain Capital, after the private equity firm of the same name, joined them. The puppet was made in the likeness of comic book villain Bane, antagonist in the recent film “The Dark Knight Rises.”

“You have a company that this candidate has founded that has destroyed middle class jobs and built jobs that are minimum wage with barely any benefits,” said Gregory Fries, 25, campaign coordinator for United Way of New York. “It’s harmful to our communities.”

Protestor Shantees Jones said, “I used to work for one of Bain’s industries, Burlington Coat Factory, for just $8 an hour and I have three children to feed.” Jones was recently laid off.

“I think it’s unnecessary for him to be there having a $2000 breakfast when us 99% don’t even have a dollar in our pocket,” she said.

Suggested contributions for the fund-raising breakfast at the hotel located at 53rd Street and 6th Avenue, were $2,500 per person or $25,000-$50,000 per table of 10, according to the event invitation on the web site of nonprofit organization the Sunlight Foundation. Almost 1,000 were in attendance, said Shayler.

During the demonstration, one protestor spoke into a microphone connected to the puppet.
He said, “I am Bain Capital, a member of the League of Shadiness. And I stand before you as proof that corporations are people.”

For many, the focus was not candidate Romney himself, but the state of the political institutions.

“It’s not about a particular person,” said Nobles. “It’s the system.”

“This issue does not see color, race or party,” said Jeffrey Brewer, 34, a member of Occupy Wall Street. “We are not as concerned about any particular candidate, whether it be Romney or Obama. What we are really concerned about is the process they are engaging in; high profile candidates are giving first attention to people with big fat paychecks.”

Brewer said he plans to protest at President Obama’s fundraiser in New York City next week as well.