Quiet Reflection on the 11th Anniversary of 9/11 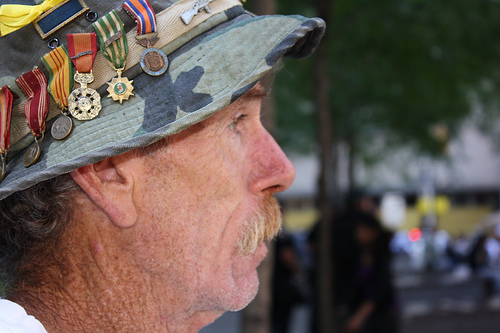 Vietnam Veteran and first responder, Jimmy Bacolo, remembers his service and the lives lost on 9/11. Photo by Courtney Pence

It is an abnormally quiet morning on the streets of lower Manhattan. There are no honking horns, no ringing cell phones, not even a conversation can be heard as hundreds of New Yorkers make their way to their destinations.

As the impressive structure of One World Trade Center looms directly above, and not far from the 11th memorial service and reading of the victims’ of September 11 names. It’s a private ceremony for family members, but this detail does not stop New Yorkers and tourists from weaving through police-lined streets in search of a place to pay their respects and remember.

Vietnam veteran Jimmy Bacolo was in Zuccotti Park with others mourners. Bacolo, 67, of Brooklyn, was working for the Staten Island Ferry when word of the plane crashes reached his crew. They rushed to Ground Zero to help.

“You did what you had to do, this was our country, we were under attack, and I’m a veteran,” he said. “There was no way I was gonna turn around and go home.”

Bacolo did not go home for five days.

“I stayed with the ferry, we were bringing equipment, supplies, and material, and firemen and EMS people on the boats back and forth,” he said. “And then we were coming up here ourselves with trucks dropping off water and soda, stuff like that.”

Bacolo was not a trained fireman or police officer, but he was a first responder. He said it was very chaotic and surreal.

Barcolo pointed to the trees of Zuccotti Park. He said everybody responded on 9/11.

“Nobody went home,” he said.

Israel Garcia, 24, of Brooklyn, was also in the park, remembering his life on September 11th, 2001. Garcia is currently serving in his fourth and final year in the Marines. He was in grade school in Brooklyn on the day of the attack. Seven years later he enlisted and when he did he knew his chances of being sent to the Middle East were high. He has since served tours in both Iraq and Afghanistan.

“It’s like everyone else, you wake up every morning and you put one leg through your pants just like everybody else, you just go do what you gotta do,” he said. “It’s like a regular nine-to-five with a machine gun in your hand, that’s about it.”