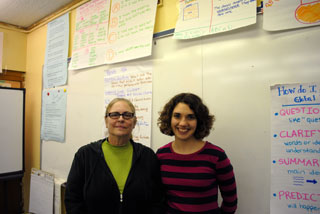 At Marta Valle Secondary School in the Lower East Side, more than 30 students and three aides are squeezed into mismatched tables and chairs during Sarah Gardner and Susan Klein’s ninth grade English class. Some students are facing the back of the room because their desks don’t fit any other way.

Despite the discomfort, every student listens attentively as Klein reads aloud from “Swallowing Stones,” giggling as two of the book’s characters share a kiss by the pool. Klein has an easy rapport with her kids; she cracks jokes and exchanges personal stories but does not compromise her authoritative position. When she yells “One mic!” in her booming voice, everyone immediately sits up straight and listens.

Although they work to engage students and create a positive learning environment, Klein, Gardner and the other teachers at Marta Valle appear to be fighting a losing battle.

Not one student in Klein’s class is reading on the appropriate grade level. Fewer than half of the students at Marta Valle will graduate. Klein, along with many other educators, attribute the continuing deterioration of New York City public education to misguided reform efforts put forth by Mayor Michael Bloomberg and the Department of Education, particularly in the areas of performance assessment and spending.

“I compare Bloomberg’s reforms to selling golf balls to people stranded in the desert. It just doesn’t work,” Klein said. “You need to be selling bottled water.”

In his Nov. 3 victory speech, Bloomberg vowed to “keep improving what is far and away the best public school system of any big city in the country,” citing “amazing progress” over the past eight years. But critics of the mayor’s agenda have seen little progress. Leonie Haimson, executive director of Class Size Matters, a non-profit clearinghouse for information on class size, believes that reform efforts thus far have been wholly ineffective.

“We know that there are a few education reforms that have been proven to work to improve educational outcomes,” Haimson said. “The problem is that none of these have been implemented.”

Instead, reform strategies have included a new report-card system for city schools, in which the DOE grades schools from A to F, and an effort to increase the education budget, in which it allocates money directly to schools.

Marta Valle is only one example of a school in which the strategies have severely backfired. Gardner, Klein and a number of education experts place heavy blame on the DOE’s school report card system, designed to promote accountability and transparency.

In 2009, 84 percent of New York City public schools received an A — an incredulous jump from 23 percent in 2007. These numbers indicate a trend that Klein considers one of the main problems at Marta Valle, and a major flaw in new reforms. She believes that interest in improving students’ academic abilities is superseded by the need to meet bogus department standards.

“Students whom I fail, who cannot read and should be held back, are moved to the next grade to keep the numbers up and make the school look good,” Klein said. “This is the root of the reading problem. It perpetuates the cycle and ruins kids’ chances at literacy.”

“The report-card system is a mechanism by which parents, teachers and the DOE can hold schools accountable for student progress,” Kanner said. “Then, schools can be dealt with accordingly.”

Still, the initiative has been met with harsh criticism. Jennifer Jennings, a sociologist at Columbia University, compares the progress reports to a flawed medical check-up. Just as doctors are accused of medical malpractice, she views the system as educational malpractice.

“The progress reports create an illusion of improved progress where none actually exists,” Jennings said. “It doesn’t do anyone any favors to pretend that things are better than they are.”

Schools that receive an A or B on the DOE progress report are eligible for cash rewards, while those getting a D or F are threatened with closure. As educators face unrealistic pressures that threaten job security, instances of falsifying school records, wrongful promotion of students and cases of grade tampering have become more common.

“The reports have lead, or forced, teachers into skewing data to improve results artificially without ever getting to the actual problem, which is providing students with a proper education,” Haimson said. “It’s a travesty.”

With the distractions created by the pressures of report-card data, attention has been drawn away from the students. And at Marta Valle, they need all the help they can get.

“It’s a fight to the death just to get my kids to class, let alone take an interest in their own academic improvement,” said Gardner.

One way to encourage students to take an interest in academic improvement, educators agree, is to decrease class sizes. But despite campaign promises and a 72-percent increase in the city’s education budget since 2002, class sizes have not gotten any smaller.

According to the most recent data released in late November by the DOE, all class size averages have gone up in the past year. High school English classrooms such as Klein and Gardner’s now have an average of 26.4 students compared to 25.6 in 2008.

Small classes are especially important at Marta Valle, where 75 percent of students are disadvantaged.

“It is well understood that poorer, disadvantaged kids inhabit environments that are incredibly adverse to educational opportunities,” Jennings said. “From the minute they walk into the classroom, they are behind.”

These students require more attention from teachers in order to compensate for lack of access to out-of-school opportunities and resources, which families are unable to provide. Having fewer students per teacher allows for more individual attention.

“At a place like Marta Valle, students become disengaged in large classrooms without individualized instruction,” Haimson said. “They feel like no one cares.” 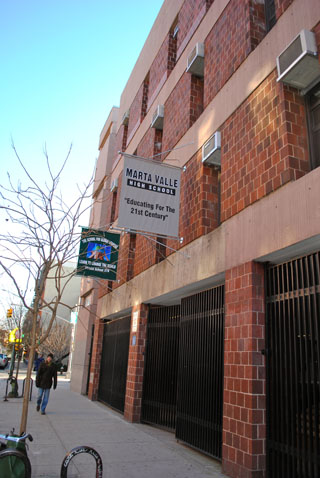 Marta Valle Secondary School in the Lower East Side.

In addition to special attention from teachers, Jennings says that access to school resources and improved facilities help to narrow the achievement gap.

“Educational resources, because they’re not always available at home, need to be equalized for poorer students,” Jennings said. “So far, New York has done a good job at this equalization in many schools.”

According to Susan Klein, the facilities and resources at Marta Valle are still not up to par. When students were required to gather research for an essay, it had to be done during class time because many students do not have computers at home.

“We arrange trips to the school library so that students can get necessary information, but equipment problems delay progress,” Klein said.

During one trip to the computer lab, only one printer erratically worked, and all of the computer paper ran out. Klein and Gardner’s 30 students managed to print out only a few pages of information, and some left with nothing.

Doing research for a paper, a task that can typically be completed for homework in one night, occupies days of valuable class time at Marta Valle and are further delayed by facility issues. This lagging productivity, exacerbated by misguided funding, causes students in schools like Marta Valle to fall behind in academic skills across the board.

Despite the criticisms of Bloomberg’s reform efforts, Kanner is optimistic about the future of New York City public education, especially with President Obama in office. Bloomberg plans to take advantage of Obama’s Race to the Top competition, which rewards states for successful reform advances.

“Over the next four years, we will sustain and build on progress that has already been made,” Kanner said. “Significant funding opportunities made possible by the Obama administration will help to further the mayor’s vision.“

So far, Bloomberg’s vision hasn’t alleviated the challenges faced by public school teachers like Gardner and Klein. They said they struggle each day to stay optimistic and to remind themselves they are making a difference. The key, Gardner says, is to remember that each child has the ability to improve, regardless of the faults in the city’s education system.

“The big idea, that I find myself repeating in my head each day,” Gardner said, “is that every student is capable of being successful, no matter what.”

Kudo to the post and the details, i have also bookmarked your RSS feeds for more updates.

I recently came across your blog and have been reading along. I thought I would leave my first comment. I don’t know what to say except that I have enjoyed reading. Nice blog. I will keep visiting this blog very often.

Pretty good post, genuinely educational stuff. Never ever imagined I’d discover the tips I need in this article. I have been scouring all around the net for a while now and was starting to get discouraged. Fortunately, I happened across your website and got exactly what I was looking for.

Hey! Thanks for the Blog post! I’m finding it very interesting. I’m going to bookmark this psot and return. What other resources are there on the same subject? Keep up the great work, have a great day!

This post has really caused me to think about several new issues in our world. Thanks for causing others to think.

Interesting article. Were did you got all the information from… 🙂

Even though I would have appreciated it further if you added in a video or at least images to support the description, I still thought that your content quite helpful. It’s normally difficult to make a complicated issue appear simple. I value your internet site and will register for your feed so I won’t miss anything. Fantastic articles or blog posts

I have recently been looking all about for this info. Luckily I just noticed this on Bing.

Thanks for all the helpful posts. They really helped me ! Between, you just got a new subscriber now!

great info. Tweeted about it. I’ll bookmark this post too later.

This was a really great read, thank you so much for taking time to put it together! Touched on some very good ideas. I’ll certainly be back soon

When you open net, you are bombarded with millions of article. However, unfortunately most of them are just a piece of junk. It is difficult to even read first paragraph of such articles. However, this article is not like them. It contains quality content, which can bind you to finish till the last words.

You might have read many articles on various articles. However, most of the time you came to know that content was not up to the mark. This article is actually related to the topic and features unique information relevant to the theme of the article.

Hi, found this through yahoo. just wanted to let you know that part. but um, thanks for the article. It’s good to know.

Hi, your blog page appears to be quite artistic in its style.

I feel like I’m constantly looking for interesting things to read about a variety of niches, but I manage to include your blog among my reads every day because you have honest entries that I look forward to. Here’s hoping there’s a lot more great material coming!

Hello, great, this is top notch stuff, keep up the good work.Cheers

Wow dude, I never knew that, much appreciated.

I absolutely love this blog. Maybe you could let me know how I can keeping up to date with it? By the way I discovered this site through Google.

I Really like just how you write…thanks for publishing

Thanks for writing such a thought-provoking post. Let’s keep the comments relevant.