Rebuilding Detroit: The battle against illiteracy takes a blow 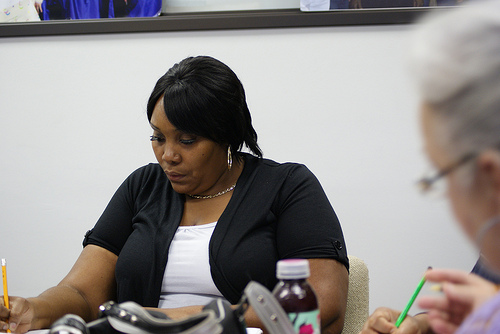 Eva Reed, 42, attended class at Mercy Education Project on Oct. 13. Reed began the Pace Program in 2009 and will receive her GED in November. When Reed started the program she was reading at 4th grade level. The illiteracy rate in Detroit is 47%. Photo by Jessica Bell

Eva Reed dropped out of high school when she was in ninth grade. She was unmotivated, with teachers who seemed to not care about her success. Her sister had just been killed and her mother needed help raising her seven children. Nearly 30 years later Reed, 42, is attending Mercy Education Project’s Pace program taking classes to improve her reading and math skills.

“I never got a chance,” Reed said of her high school experience. “I was always trying to get help to the point where I was crying but I never got the help I needed.”

Mercy Education Project has been operating in Southwest Detroit for 19 years. They provide a variety of GED preparation classes to women and most students arrive reading at a fifth grade level or below. Reed knew something was wrong when her seven children started surpassing her educationally.

“It was my third oldest daughter, when she was in school and I couldn’t help her with her homework, that’s when I realized I needed help,” she said.

Reed is like 47 percent of Detroiters, who are considered functionally illiterate. While there are several organizations around the city working to bring this number down, the city is still in such financial straits that the education system has been deteriorating for several years. It was recently announced that the city has to close six branches of the Detroit Public Library.

Amy Amador, the executive director at Mercy Education Project, says the deterioration of the education system in Detroit is partially to blame for such a high illiteracy rate.

“Our schools have been in turmoil for years,” she said. “We have had a history of once kids get to high school, we’re just waiting for the ones who are going to drop out and focusing on the ones who stay in. There are a lot of efforts to make changes, but we aren’t there yet.”

Detroit had the their highest graduation rate since 2007 last year with 62 percent of high school students graduating within four years. But, that still leaves 38 percent of young Detroiters without the basic skills they need to find work. The system has faced large deficits and announced a budget cut of $230 million this summer.

Detroit Public Schools is not the only local department facing serious cuts. With the library being forced to close six of its 23 branches at the end of the month, residents have risen up to try and save them. They are writing letters to the Library Commission and picketing outside their local branches.

G. Peggy Noble, the Fenmore Block Club president responsible for protesting outside the city’s main library to save the Chase Branch, said she and her community understood the cultural and educational importance of keeping libraries open for the children.

“We really didn’t want the library to close, but then when you look into the eyes of the children here, we knew had to do something,” Noble said.

Donald Bailey III, 13, said he and his friends come to Chase everyday to do their homework in a quiet and peaceful environment and stay safe after school. 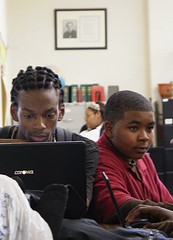 Donald Bailey III, 13, (right) said he and his friends use the Chase Branch of the Detroit Public Library everyday after school and on Saturdays. He doesn't have internet access at home and says he is able to concentrate on his homework better at the library than at home or school. Photo by Jessica Bell

“If [the library] wasn’t here we would probably just be out on the street robbing and doing crimes and stuff like that, that we shouldn’t,” he said. “But while we’re here this is stopping us from doing that.”

At the Chandler Park Branch, another on the brink of closure, Barbara Thomas holds meetings for her non-profit organization Believe in Detroit Just for Girls, a math and literacy enrichment program for girls ages five through ten. Thomas volunteers at a nearby school and brings the girls in her program to the library for three hours every Saturday to read and check out books.

“I was startled,” Thomas said of the closures. “The first thing I thought was what am I going to do with my girls.”

Illiteracy can be passed on from one generation to the next and certainly the threat of losing libraries hasn’t gone unnoticed as a serious issue by literacy advocates in the city.

“It’s unfortunate when libraries close because that’s quality of life,” Margaret Thorpe Williamson, the executive director of Pro-Literacy Detroit said. “They are repositories of information so it’s important for young people and all people to have access.”

While the Detroit Public Library declined comment, Detroit City Councilman James Tate said that the city has struggled to make headway on the illiteracy issue, one that he championed while campaigning in 2009, and that hearing about libraries closing is painful.

Tate said the challenge Detroit is facing is changing the collective mentality on education. He said that because the city relied so heavily on the auto industry that kept them comfortable for decades Detroiters never put a heavy emphasis on higher education.

“The problem that we’ve had over time is that many of our families didn’t really emphasize higher education and that unfortunately led to not valuing education as a whole,” he said. “And that’s what we’re trying to fight.”

Susie Schechter is the executive director of Reading Works, a new collaborative between several literacy organizations including Mercy Education Project that is going to be used as an awareness and fundraising platform. She said the blame cannot be placed on Detroit’s current education system alone. Historically, Detroiters did not necessarily need basic educational skills to get by.

“People could come to Detroit and work on the line and make a great living and you could get away without having high literacy skills,” she said. “The auto industry is always going to be a huge part of who we are. But if we want to move into the direction we are poised to move into we need to have a workforce that has a higher skill set.”

Moving the city into a new direction is why Reading Works brought together nine of the longest running and successful literacy organizations in the city together. Their main objective is to bring everyone together to talk about challenges and brainstorm ways around them.

“Certainly, we’re facing up to the problem,” Schechter said. “We’re not denying that it exists anymore. We’re trying to handle the crisis.”

For people like Reed, the Mercy Education Project student, gaining the courage to admit she needed help and finally getting it has been a liberating experience. When she first came to Mercy in 2009, she read at a fourth grade level, now she has passed three out of five parts of her Graduation Equivalency Diploma exam.

Reed knows other people with similar reading and educational struggles as herself and encourages them to let go of their pride and look at her as an example.

“I never thought I would be where I’m at today,” Reed said. “I always looked down on myself and I never thought I could do anything, but once I got here and just the love, the peace, the people here, it’s a blessing.”