Sales of fro-yo dip as city settles into deep freeze 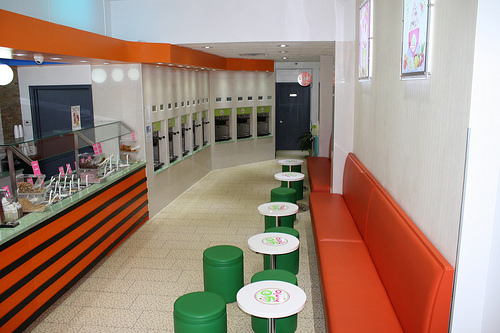 Yohielo frozen yogurt shop in Greenwich Village has seen a major drop in customers during the winter months. Photo by Reuben Jones.

Yohielo frozen yogurt shop in Greenwich Village has seen a major drop in customers during the winter months. Photo by Reuben Jones.

Standing behind a bar of rainbow colored sprinkles, blueberries and chocolate sauce was a smiling, but lonely staff member at a newly opened Red Mango frozen yogurt shop in Prospect Heights, Brooklyn, yesterday.

The wait for a customer can sometimes be long for Christie Jorsling, 28, who is supposed to be a shift leader, but she is working alone because business is slow. Jorsling is counting down the days when the temperatures that see people running into coffee shops depart, and the dog days of summer drive those same people into ice cream or frozen yogurt shops. 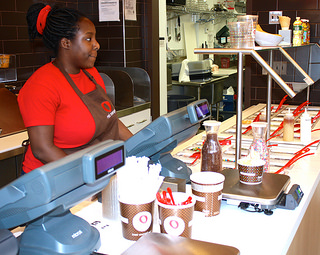 Christie Jorsling, 28, is supposed to be a shift leader but because of slow business she has been the only employee during her shifts. Photo by Reuben Jones.

“The cold is not my friend,” said Jorsling who said she only typically sees about 10 customers during her shift from noon to 4:00 p.m., and they are usually the same ones.

The story is the same at the five-month-old Yohielo frozen yogurt shop in Greenwich Village where Brittany Henry, 17, a cashier at the store, estimates that on a typical day when they first opened in September she would see around 250 customers. Now, she only sees around 20.

During her down time, Henry has to find other distractions.

Down the street, Yooglers Frozen Yogurt sees about a 50 percent drop in customers in the winter season. But management has decided to take a step away from the frozen business. Outside of their store is a sign that results in many cold heads turning to look: $1 coffee.

Anne Black, 24, is the manager of the shop. She said the decision has paid off and they have also started selling candy in bulk to draw in customers that might typically ignore the store during the cold months.

The seasonality of the ice cream and frozen yogurt business makes the location of the shops especially important, Black said because the Yooglers store is large it allows people to come in and hang out in a heated shop. But she said their business relies on three main groups of customers: tourists, students and regular customers. According to Black, Yooglers is able to bring in those three groups because of their location near New York University.

At Red Mango, Jorsling said because of her distaste for the cold, she admits she would have a hard time buying ice cream herself. 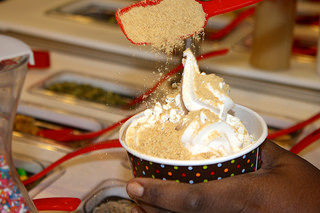 Red Mango in Prospect Heights opened the end of 2013. Photo by Reuben Jones.

“I wouldn’t even know how to sell someone on that,” Jorsling said. “It’s hard for me to be like, yay cold things, when it’s really cold.”

But to customers in some of the brightly colored frozen yogurt shops playing happy music, the temperature didn’t impact their decision to eat the frozen treat.

“Its cold, and you’re miserable, and its always nice to treat yourself,” said Sam Whitlam, 28.

Reminders of summer are easy to find at ice cream and frozen yogurt shops around New York City, and while that may be one reason customers help keep the shops open until the warmer months, that’s not the main cause. The comfort the treat brings to the stomach are what customers said brings them back through the doors.

“The regulars, they legitimately love it,” said Jorsling. “They genuinely really love the product.”

That’s good news for shop owners because temperatures aren’t supposed to go above 30 degrees in New York City for the next three days.