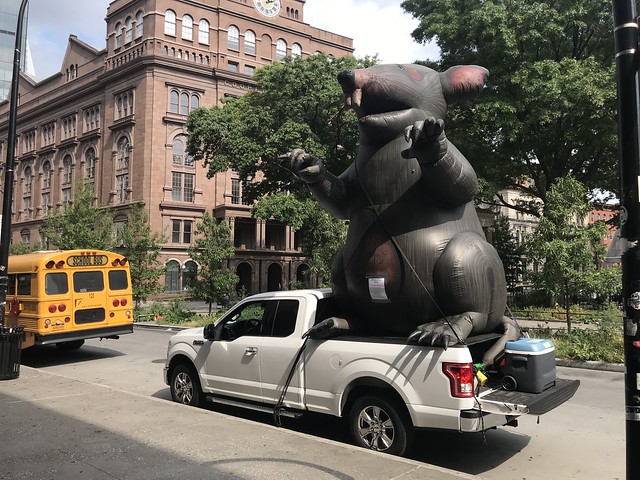 Scabby the inflatable rat sits in the back of a pickup truck parked on 59th Street in Manhattan. Here the inflatable figure is poised in front of Muji, a popular minimalist store, as a symbol used by union workers to draw attention to unfair treatment. Photo by Thomas Hengge

Scabby the Rat—a giant inflatable figure used as a symbol of defiance by union workers on strike—has been perched outside Muji, a popular minimalist store in the Bowery, for the past few weeks.

But instead of looming over potential customers to make them think twice about entering a store engaged in alleged unfair labor practices, Scabby’s presence had another purpose. The union workers were also protesting their right to free speech.

“They took us to the courts saying we do not have the right to protest,” said Robert Tchaikovski, a union worker manning the pickup truck that Scabby was sitting atop today. “We are allowed to protest. It’s freedom of speech, the standard procedure not just against Muji but many companies.”

Recently, union workers came together against Muji claiming the contracting company they were hired through was taking advantage of workers on the Muji project. The union activists accuse the company and Muji of using untrained and amateurish construction workers as a replacement for the union workers to cut employment costs.

In addition to lower wages, grievances also include little too “no safety regulation on job sites” and “no insurance for laborers,” which was listed on a flyer taped to the belly of Scabby who sat poised in the bed of pickup truck parked on the street in front of Muji. 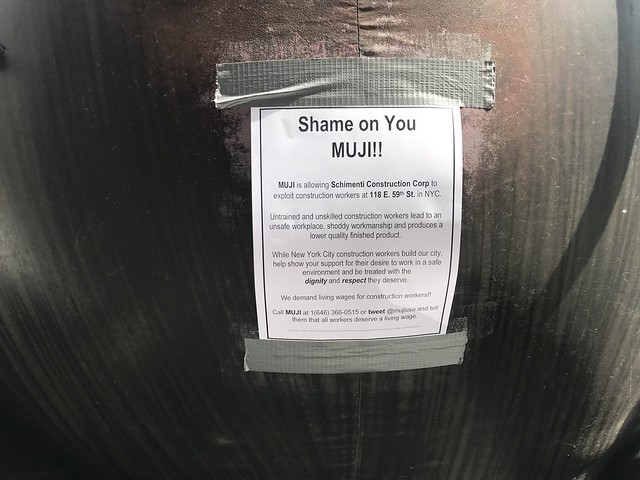 Tapped on Scabby was a message from the union workers to Muji calling for livable wages. It was also a call to action, urging the public to contact Muji on behalf of the union. Photo by Thomas Hengge

For the union workers, if grabbing the attention of the public was the mission, Scabby helped accomplish it with ease.

People passing by paused for a moment, laughing and at the inflatable rat. Some took pictures with and of Scabby, turning and nodding to the union worker manning the truck who did so back in a moment of solidarity. The majority stopped to read the flyer, including some customers coming out of Muji, though more tried to slip out seemingly unnoticed not to be caught in some form of crossfire for continuing to shop there.

And few were a bit more vocal.

“I have to side with the union,” said Koos Verwoerd, a Dutch tourist on holiday who stopped briefly to observe the protest. “It is a necessary action.”

The workers’ right to protest, is currently being dealt with by the National Labor Relations Board.