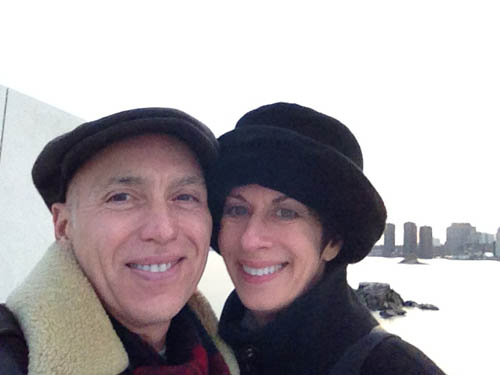 “Mary Hickey, 65, and her boyfriend Joe pose for a photo on Roosevelt Island about a month and a half ago. Hickey met Joe at a walking tour of the Flatiron District last spring—an event she organized on Meetup.com. Photo courtesy of Mary Hickey.

“Mary Hickey, 65, and her boyfriend Joe pose for a photo on Roosevelt Island about a month and a half ago. Hickey met Joe at a walking tour of the Flatiron District last spring—an event she organized on Meetup.com. Photo courtesy of Mary Hickey.

When Mary Hickey showed up to a Meetup.com walking tour of the Flatiron District last spring, she never expected she’d come home with a boyfriend. Instead, she met Joe. They’ve been dating since April, enjoy skiing and dancing and are completely smitten with one another.

“We had brunch and then we were going out to walk, and he kind of sat himself down next to me and we started to talk, and as they say the rest is history,” Hickey said.

Hickey, a Chelsea resident, said her success is all thanks to Meetup.com—a social networking site that allows users to form groups and plan “Meet-ups” based on the groups’ common interests. With the difficulties that straight, single women over 60 often face when it comes to finding relationships, many are attempting to use Meetup.com as a means of meeting potential romantic partners.

Hickey divorced her ex-husband 16 years ago. Before she met Joe on the walking tour Meetup, Hickey—like other single women her age—had to consider whether she would still be desirable to the single men her age.

“To some extent, I wasn’t interested, but I didn’t think anybody at this stage would really be interested in me either,” she said.

According to Marian Banker, 73, of Midtown Manhattan, Hickey’s initial concerns are all-too-common for single women over 60—and that’s a problem. That’s why last spring, Banker started a 60-and-over Meetup.com group called The Platinums. She wanted to show her fellow single seniors that it’s never too late to enter the dating game.

Since last spring, Banker’s group has gathered 178 members. The senior singles regularly gather at restaurants in New York City, where they collectively dine and share their ideas on pre-determined discussion topics.

Jordyn_audio_2
Banker explains the purpose of The Platinums

There’s one problem, though, that makes successful love stories like Hickey’s hard to come by, even with the help of Meetup.com: most senior women are looking to date men their age, but lots of senior men still have their sights set on younger women. The result, according to Ken Kaplan, 65,who founded a seniors’ Meetup group called Alive and Kickin’,is that the turnout to most single seniors’ events is overwhelmingly female.

“Older men still want younger women,” Kaplan said. “We have six women in the group for every man. I computed it once.”

Kaplan, who works as a real estate agent in Parsippany, N.J., even added that he’d rather date a younger woman than someone his own age.

Jan Chambers, 62, of Parsippany, N.J., can testify for the gender disparity. Despite being an active member of Kaplan’s Alive and Kickin’ group, Chambers is currently having trouble finding the long-term life partner she so desires.

“Unfortunately, there is a lot of Ageist attitude with older men,” she said. “Many many many single women, [and] very few men come. [It’s] easier for men to date when they are older. If they are at all attractive and have any money, they apparently do not need Meetup groups.”

But Hickey insists there are senior men out there who are comfortable dating women their own age, or older.

“Joe is different in that regard,” she said. “He’ll say, ‘What will I have in common with someone who’s 30? Or 40, even?’ I don’t want anybody who has small kids—I’m finished with that. And neither does he. We’re in kind of the same stage of our lives at this point.”

But despite the gender imbalances that undeniably plague single seniors’ Meetups, both Chambers and Hickey firmly asserted that they would still rather try their luck on Meetup.com than on regular dating sites like Match.com and eHarmony.

“I really was not into the whole online dating scene at all,” Hickey said. “[Meetup.com] is just a nice way to meet with people who, by the nature of the fact that they’re showing up for an event, are interested in something that you’re interested in as well. You don’t go through the “winking” and emailing and then meeting for coffee. It’s not three times removed.”

Dating isn’t easy for today’s Golden Girls; they’re up against rampant Ageism, as well as their own personal trepidation about entering singlehood so comparatively late in life.

Still, with tools like Meetup.com, Hickey knows that senior women can find the over-60 men of their dreams (she pointed out that she and Joe would be spending Valentine’s Day together on a romantic Cape May getaway). Sure, it’s a challenge (Hickey repeatedly stated how surprised she was to have met Joe), but the potential romantic rewards make it worth the Ageist, gender imbalanced journey.

In the words of Banker, creator of The Platinums, “If not now, when?”