Educators reach out to children of all abilities 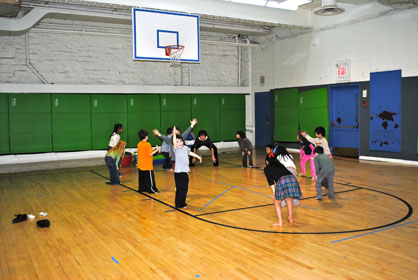 Students of the Ideal School in a Physical Eductaion class.

Students of the Ideal School in a Physical Education class. Photo by Alexandra DiPalma

Julia Harquail searched tirelessly to find the perfect school for her youngest daughter, Catherine, who has Down syndrome. Having gone through the selection process with her two older children, Harquail knew the difficulties she would face in finding a school for Catherine.

After much deliberation, she decided on a PS 163, a public K-5 school on the Upper West Side. Everything seemed to be going well, until the first parent-teacher conference.

“My husband and I walked in, and the teachers calmly explained that, frequently, Catherine would get physically lost during the school day,” Harquail recalled.

Usually, Harquail learned, panic would ensue, until Catherine was located somewhere in the building, among the school’s 600 students.

“As upsetting as it was, any school with a one-to-30 teacher-student ratio is going to end up with some lost kids,”she said.

But Harquail couldn’t bear the thought of her youngest child going missing again, so she pulled Catherine out of the school and began her search anew. After doing research and making visits, Harquail soon came to the realization that many parents reach: Maybe the perfect school for her child just didn’t exist.

Instead of settling for the next best option, Harquail and two friends took matters into their own hands.

The three women started their own independent school, appropriately named The Ideal School. Dedicated to creating an inclusive learning environment, Harquail and her co-founders worked with education experts to balance the needs of all children. Students with special needs occupy 25 percent of classroom seats, learning side by side with their typically developing peers. Ideal, located at 76th street near Central Park West, is the only independent inclusive school in Manhattan. 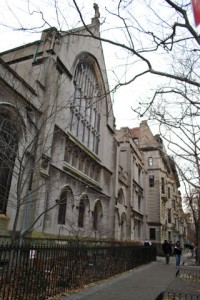 The Ideal School on the Upper West Side. Photo by Alexandra DiPalma

“There is a huge stigma against people who supposedly look different,” Harquail said. “And for many schools trying to be competitive, the last thing they want to do is take a child with visible disabilities when people are coming to look at the school for their own kids. But that stigma doesn’t exist at our school.”

For Harquail, Ideal is more than the manifestation of her idea for the perfect school. It is one step in the movement toward changing the negative perception of individuals with differences, instilling inclusive principles in children at a young age.

Before founding Ideal, Harquail visited several independent schools that advertised an accepting, embracing environment, but she was met with overwhelming negativity from admissions directors. Many schools told her that there was no possibility for Catherine to enroll.

After talking to friends who also had children with Down syndrome, Harquail discovered that her experiences were not isolated.

“Some places let us apply and take a school tour, even though there was never any chance. One of my friends was told that her child with Down’s was not welcome,” she said. “It’s really hard to face that rejection of your own kids.”

Even in the most diplomatic of circumstances, Harquail was simply told that Catherine could not be accommodated. When they created Ideal, Harquail and her co-founders decided their admissions policy would be different.

“After our experiences, it was critical that we never used the phrase ‘We cannot accommodate your child.’ At Ideal, we blow off classifications from the Department of Education,” said Harquail. “We want to know who you are, what your strengths are.”
Emphasizing individuals’ strengths, regardless of genetic differences, is central to the work of former fashion photographer Rick Guidotti who spoke at a recent event at the school. In 1997, Guidotti co-founded Positive Exposure, an organization that uses visual arts to challenge the stigma associated with individuals with genetic differences.

A turning point in Guidotti’s career came when he saw a young girl with albinism waiting for the bus. After researching the disease, he was appalled to discover the available images of people with albinism.

“All I found were horrible images of sickness, sadness and despair, lacking all traces of humanity — kids in offices with black bars across their eyes,” Guidotti said. “But the girl waiting for the bus didn’t look anything like that. She was beautiful.”

“A picture of a child in his underwear at the doctor’s office is unnatural. It’s an image used for diagnosis,” Guidotti said. “For other photos, put that kid in the pool! He swims, plays, has fun. He doesn’t just go to the doctor.”

At the school Guidotti spoke about the power of inclusive principles in the context of the wider world. He works with schools, using his art in a curriculum that teaches positive self-acceptance to typically developing children and those with special needs.

“Too often, people have such an empty understanding of the ‘Different is Beautiful’ mantra that is taught in schools,” Guidotti said. “When kids see the photography, they can grasp the real beauty in diversity. At Ideal, there is such a strong grasp on this concept.”

For parents like Harquail, the early acceptance of diversity fostered in an inclusive environment is vital. The atmosphere at Ideal allows special needs students to be a part of the wider community.

“We knew that for Catherine to be able to participate in society, then she has to be part of society from day one,” she said. “And this is the only way to really do that.”

On the surface, it’s easy to see how the environment at Ideal benefits children with special needs. But in Angela Bergeson’s experience, it is more difficult for people to understand the benefits that Ideal can provide for typically developing children. As head of school, Bergeson often finds herself explaining the inclusive philosophy to skeptical parents.

“I try and answer these questions a lot: Why is this school good for normal kids?” Bergeson said. “Why is it better than going to a top five private school where half of the graduates go to Ivy League schools? Why, why?”

Find out what they can doAngela Bergeson talks about teamwork

For Bergeson and other supporters of inclusive education, the answers are simple. She believes that Ideal instills levels of empathy and kindness that no other schools can offer. Beyond character-building opportunities, Bergeson emphasizes the unique utilitarian skills students at Ideal gain.

“The typically developing kids here will go out and have better communication skills than anyone else. Every day, they interact with peers who have actual speech and language issues,” she said. “From day one, they work together, honor each other and learn to communicate in a better way.”

One common concern that parents share is the notion that typically developing students will be hindered by special needs classmates.

According to Bergeson, many parents worry the progress of high-achieving children is impeded by sharing classroom time and space with children of lower ability levels.

“If you look at a younger brother who doesn’t know as much as an older brother, it doesn’t bring the older sibling down, it brings the younger sibling up,” she said. “It’s exactly the same in the classroom. A peer who is cognitively less strong does not bring high-achieving students down. The special needs student is brought up.”

Beautiful thing
Angela Bergeson on the beauty of an inclusive education

Mutiya Vision, an author and educational workshop facilitator, witnesses daily the positive ways that inclusion has affected her typically developing children. Born with one hand, Vision refers to herself as handi-capable rather than handicapped.

Having grown up with a physical difference, she now works to expand awareness and break down negative perception barriers that affected her throughout life.

“In school, I used to get taunted and teased about my little arm,” Vision said. “I was one of the smartest kids in school, but I was moved to a special education classroom. The easy fix has always been removing the problem instead of facing it head on.”

Vision has written books and moderated classroom workshops that help students of all ability levels to accept themselves, and the person sitting next to them, no matter who that may be. Vision’s able-bodied children have had incredible success at P.S. 10 in Brooklyn, an inclusive public school.

“Inclusion helps the heart and mind of a child and allows them to expand awareness,” Vision said. “I see my kids as part of a paradigm shift, where children are understanding tough cultural issues and working through them together.”

Vision, Guidotti and everyone at The Ideal School understand that, like any movement working toward change in social perceptions, it’s a slow process. But the resounding success of each of their efforts has provided a unique optimism.

“Sometimes, it feels like you’re pushing a rock up a hill,” Harquail admits. “But when you hear about the successes of others, and when I look at our own personal accomplishments, you just know that all these little bits will make the difference.”

really touching, amazing coverage of a great story. a boon to the site

I recently came accross your blog and have been reading along. I thought I would leave my first comment. I dont know what to say except that I have enjoyed reading. Nice blog. I will keep visiting this blog very often.

You should add a subscribers section to this blog, I think I’m addicted

VRy interesting to read it 😛 😀

Worthwhile web site and useful contribution. I’ve marked it to revisit later. If at first you don’t succeed-skydiving is not for you

I enjoyed reading such a great post. Such insighful writing is rare these days. Informed comment like this has to be applauded. I’ll certainly be looking in on this blog again in the near future!