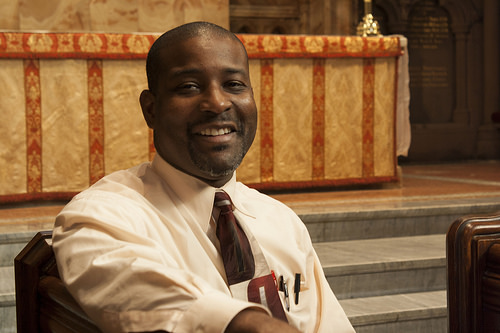 Despite being ex-communicated from his (Baptist) church and asked to leave the navy for being gay, Tommie Watkins refused to give up any part of his identity. Photo by Rajeev Dhir.

Despite being ex-communicated from his (Baptist) church and asked to leave the navy for being gay, Tommie Watkins refused to give up any part of his identity. Photo by Rajeev Dhir.

There is an ethereal echo that resonates every morning at the same time in the chapel at the General Theological Seminary of the Episcopal Church in Chelsea. Faculty and students gather for the daily 10 AM service, singing in unison, accompanied by the grind of the old organ in the corner. Their voices seem to float, almost reaching the high cathedral ceilings. Among those who sing every morning is Tommie Watkins, whose mantra is to “live out loud”.

His philosophy may seem a little bemusing since Watkins, 39, is very soft-spoken. His voice is hard to detect among the dozen or so who are assembled, but he’s relatively easy to spot among the group, even if the colorful and ornate interior of the church distract your eye. With a smile beaming across his face as he sings, he stands confidently in the pews because he knows this is where he will be ordained and accepted as an openly gay priest.

“The Episcopal Church in particular has a good history in social justice and taking the lead on gender, class and race and I think that it was just a kind of a guide. I was guided here and into the Episcopal Church,” he said.

That journey was not an easy one. He was raised in a conservative African-American family in Birmingham, Ala. and was ordained at the age of 17 as a Baptist minister. He kept his sexual orientation hidden from family and friends. Watkins said he became so depressed he started looking for an escape. When the opportunity to break away (from Birmingham) came up, he took it and enlisted in the Naval Academy in Annapolis, Md. in 1993. Four years later, he was kicked out when the secret relationship he was having with a fellow male student became public.

“I was betrayed by the guy I was dating when our relationship became public. He told the Navy I was trying to make him gay,” Watkins said.

He sued the government when he was asked to repay $90,000 in educational costs and won the four-year lawsuit. Instead of getting support from the church, he said, he was asked to leave.

“My church said that I needed to kind of disavow my calling as a minister and I said I wouldn’t, so they said you can’t come back here and preach because I was openly gay.”

“He gave so much to that church and the church has been a huge part of his family and upbringing,” said Halsey, who felt sorry for Watkins.

Watkins found solace in writing and published a book, “Living Out Loud”, about his experiences. Even though his book was well received, Watkins still felt as though there was something missing and eventually came back to religion. While he was not ready to reconnect with his Baptist roots, Watkins discovered the Episcopal Church, where he said he was warmly received as an openly gay man.

Fellow seminarian Gretchen Creele said she was stunned when she first heard about Watkins’ struggle.
“I think it’s reprehensible what he went through,” she said. “But he’s gregarious. He has a full personality. He walks into a room and he fills a room in a happy glowing way.”

Creele, 52, who is also from the south, said Watkins is a role model for other students.

“To see his inner strength that he lives out is inspiring to me,” Creele said.

Watkins will graduate in 2016 and is planning to return to Alabama to preach on familiar territory as an openly gay minister, where he hopes to include health and social justice in his ministry.

Tommie 3
“I just tell people they can live out loud. That’s the only way we can really change the world by being authentic to who we are,” Watkins said.

As an Episcopalian in the Diocese of Alabama under the Bishopship of Kee Sloan…It is puzzling how one can support this future Priest on this Subject. Sexuality without marriage should not be a Brownie point issue…Heterosexual Priest cannot walk around a speak of their sexual desires for women…same should go for the Gay industry….People in church wanna know about Jesus, God, Salvation not one’s personal sexual desires…

Let’s say I agree with this post and cheered and said this is a remarkable Future Priest..Let’s say he get himself a church..is he going to bring his New Same Sex Lover to the Church..will he proclaim and introduce his male companion to the church and include him into the church family…I say for straight or gay Priest…Sex should not be tolerated if one is not married…An Episcopal Priest can be Gay and Heterosexual..But until he or she is Married they cannot prove their sexuality by performing and act of intimacy without marriage….

Why cant he just be celibate and call it a day and focus on the Bible, Jesus, God, the Community…If gayness is his mantra..what is he gunna say to the children….How will he lead the children, if he kisses a man he is not married to…Yuk children will say…Let’s take sex out of the Episcopal Priesthoodness…Peace…