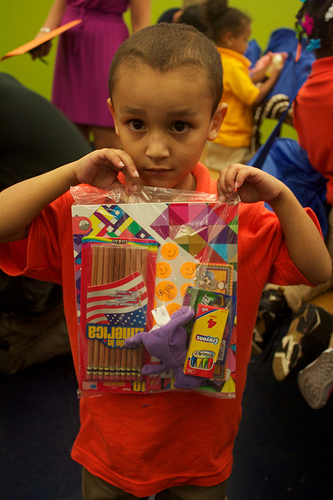 Emanuel Rivera, 5, of the Mott Haven Academy Charter School shows off a goodie bag of school supplies. The back to school event provided low-income and foster care students with necessities for their first year in school. Photo by Timothy Weisberg.

Emanuel Rivera, 5, opened up a duffel bag filled with school and art supplies and toys. Ecstatic about his newly prized possessions, which included markers, pencils, stickers, and a Thomas the Tank kazoo, Rivera of the South Bronx, was starting school for the first time.

“I get to take these home,” said Rivera while trying on a red beanie.

Kindergartners like Rivera at the Mott Haven Charter School Academy received items donated by the My Stuff Bags Foundation and the Toy Industry Foundation as an event for students starting school for the first time.

Founded in 2008, the Mott Haven Charter School Academy in the South Bronx serves approximately 255 students from kindergarten through fifth grade currently in the foster care and child welfare system. The school maintains a partnership with the New York Foundling, one of New York’s oldest and largest child welfare service agencies.

“We have some students and some families that struggle,” said Jessica Nauiokas, the school’s principal and founder. “The purpose of this school is to make sure that even if there is some chaos or struggles at home that academics don’t get ignored.”

The school also emphasizes parent participation, offering evening workshops for parents covering anything from parenting classes and how to get involved to English language improvement and literacy building, according to the school website.

Marisa Medina, the Foundation Manager for the Toy Industry Foundation, said that the foundation does not typically host on-site events, and rather ships out items like toiletries, school supplies and clothing to care agencies throughout the city.

“It’s a special occasion,” said Medina. “For these kindergartners, it’s their first time in school. We want to make sure that they start it on a fun note and that they have what they need to get their school career going.”

This is the fourth year the My Stuff Bags Foundation–which provides the duffel bags filled with items the students need–and the Toy Industry Foundation have sponsored the event.

Alan Shatz has been the Director of Community Relations and Volunteer Services at New York Foundling for 13 years, and does not see the back-to-school kindergartner event going away anytime soon.

“It’s a wonderful way to engage and welcome our new kindergartners, and especially to hopefully engage the families,” said Shatz. “The kids go home and they show their parents and say, ‘Look what I got at school.’ Success at school has a lot to do with the home life.”

And next month, the kindergartners will receive another surprise: winter clothes.

“If we have a winter like last year, they won’t need any of it,” Shatz said.

Nice article. So good to see activities and help like this being done for kids starting school.