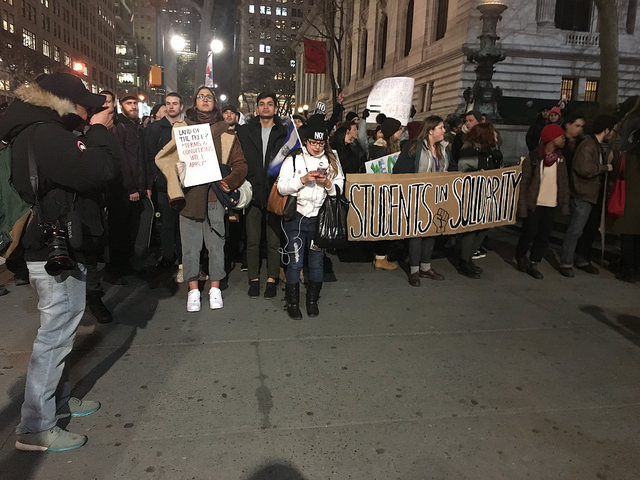 Braced against the cold of a late January night, their breath mixing with the icy air with every chant, protestors gathered at Union Square in Manhattan to rally against President Trump’s recent ban on immigrants from several countries.

Decked in scarves, gloves and with signs that read “ We are Earthlings” and “ Students in Solidarity,” they chanted “No ban. No registry. F*ck White supremacy,” and let it be known that they wouldn’t stand for the president’s executive order.

Taking a break from crying out “One solution: revolution” a student was called forward to tell her own personal story.

“When I came in on the train on the 26th, it was the day before the ban,” said the Iranian born student living in Canada who wished to remain anonymous for fear of retribution. “I was searched because they thought that I was coming and going to the U.S. too many times. They searched everything: they searched my notebooks, my writings, my phone. The Farsi and the Hebrew in my stuff alarmed them, I could tell,” said the student who is getting her PhD in politics at the New School.

The order quickly prompted nation-wide protests as thousand flocked to airports over the weekend to protest the ban and demand that detained refugees be let free.

The PhD student went on to tell a sea of shocked faces that she was told she was only allowed to stay in the U.S. until February 3.

“The officer said that he will be on the train to make sure that I am on it and if not he will send Trump’s people after me,” she said. “Now I have to go back and I don’t know if I can return. I don’t know what’s going to happen with my PhD, and more importantly to me, I don’t now if I’m going to ever see the people or the city that I love so much again. It’s a very traumatic experience because I already went through that as a child and you work so hard to heal those wounds. You just don’t imagine this happening again in what you call a liberal democracy.”

“I’m here to share solidarity with all the immigrant students at the New School who might be put in danger by Trump’s new policies,” she said. “I think Trump is only the tip of the iceberg with this kind of stuff.”

While in the square, protestors were joined by others who wanted to show their support, including Anthony Cartagine, a third year economic student at Baruch College.

“I’m out here to protest against Trump, and to protest the ban especially, and to support the people that are threatened by Trump,” he said. “When I first heard about it, it was very upsetting. It felt a bit shocking even though it’s what he said he was going to do.”

For many, what they wanted to result from the rallies and the protests was clear.

“With all the rallies and the protest I would like to see people mobilizing beyond just the rallies,” said Cartagine as he marched 28 blocks with the group to Bryant Park to meet up with more students from Fordham University and Columbia. “ They help inspire other forms of action and I think that probably the best thing to do is [for] people to just continue to act beyond the protest and take action whenever they can.”

But for the PhD student, it was more difficult to articulate her exact wants.

“Where I hope this goes, I have no idea,” she said. “Open borders and less wars. My hopes are too much to say right now”