Tenant president stands up for residents

One morning in early April, an elderly woman awoke to find her stove was no longer working. The woman, who lives in Jacob Riis public housing in the East Village, contacted the maintenance call center to report the problem.

“That is unacceptable! You know how Spanish people like their coffee,” Pamias said with a chuckle, before a stern expression swept over her face. “Seriously, though. I don’t play. I really don’t.”

Odell Pamias explains her outrage over the operator’s response.
CallCenterProblems_OdellTamias

Odell Pamias, 67, has lived at Jacob Riis Houses for 43 years, but for the past five years, she’s served as president of the tenant association. Her job is to help tenants with any housing-related issues, on a volunteer basis.

“Basically, I’m the medium between housing and tenants. Someone has to stand up for them,” she said.

Jacob Riis is a public housing development comprising 19 buildings and 1,764 apartments. Its borders are East Sixth and East 13th streets, and Avenue D and F.D.R. Drive. And it is home to 4,305 residents.

Pamias was born and raised in Columbus, Ala., but moved to New York City when she was only 17. She worked odd jobs at factories in Long Island and Manhattan in the 1960s, and moved from place to place, usually staying with friends or family members.

“I didn’t become a prostitute or drug addict, thank God. I’m surprised. But you can’t change a person, especially from South,” Pamias said. “I was doing OK. I was never, like, homeless or anything like that.”

Then in 1967, Pamias got married and had a son. When her son was only 8 months old, she applied for housing and was accepted. She moved into Jacob Riis Houses — when rent was only $68 per month. Although she got divorced in 1972, she and her son continued living at Jacob Riis. And it didn’t take long before she became involved in the community.

“I have been living here for 43 years. … I was always involved when something happened,” she said. “When there was another president … I would volunteer my service.  I could not be doing nothing — I’m not like that. I have to be doing something.”

Before she became president, Pamias served as tenant patrol supervisor — a part-time job for which she received a small stipend. For 12 years, she was responsible for the safety of tenants at Jacob Riis. Every night, she patrolled the grounds and checked on tenants. After that, she became vice president of the TA. 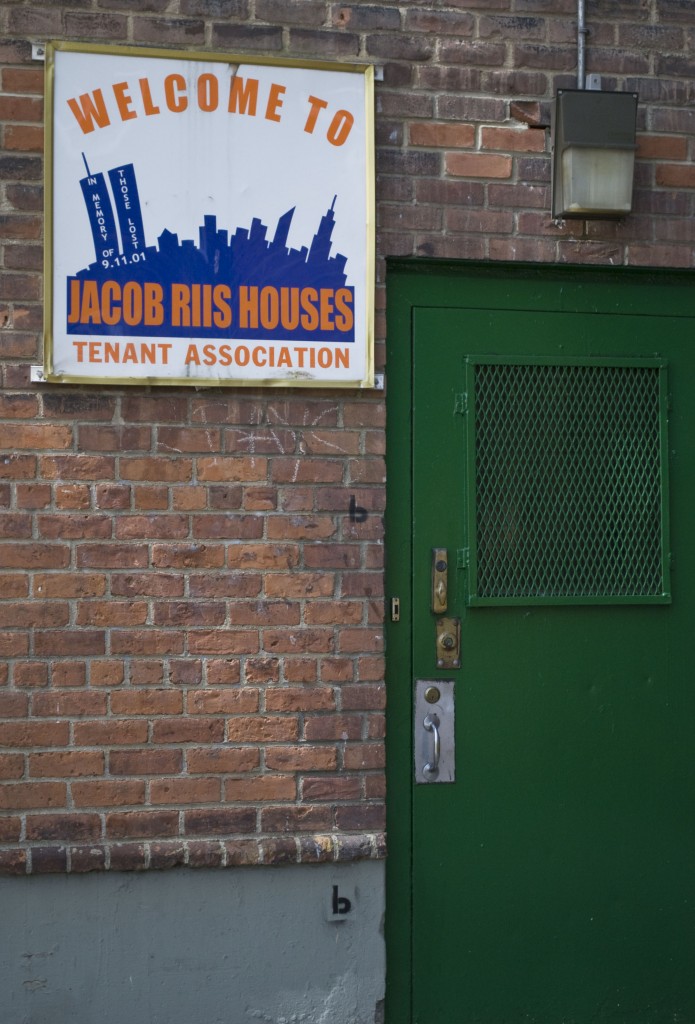 The outside of the offices for the Jacob Riis Tenant Association. Photo by Rachel Wise

During her time as president, Pamias said she has done “what’s expected” of her but doesn’t think she’s done anything “special.” But history, and tenants, tells a different story.

“I think she’s great. Always friendly and happy to help,” said Maria, a 12-year resident of Jacob Riis who declined to give her full name. “I know when I’ve had a problem, she really helps to work it out. And she’s got a great spirit about her, too.”

One thing Maria pointed to is Pamias’ ability to build a sense of community among residents, specifically citing her organization of Family Day.

Every summer, Pamias is responsible for putting together a Family Day celebration.

“Politicians give us money, and housing gives us money. And we buy franks and burgers and ice cream. … And we have a DJ and clowns, and sometimes (a bounce house),” Pamias said.

But Pamias takes it a step further: She also provides gifts for all the children who come to Family Day, sometimes using her own money if funds run out.

“I buy book bags for the boys and girls for when they go back to school in September. I put everything in there: the pencils, the pens, the eraser — all kinds of little stuff for them,” Pamias said. As she continued to describe the day’s events, her excitement grew and her eyes lit up. “I love to just help, you know, just buy stuff for the kids.”

Odell Pamias talks about buying toys for children at Jacob Riis during the holiday seasons.
BuyingToys_OdellTamias

In addition to community building, Pamias also has made great strides to improve the security at Jacob Riis. When she became aware of safety issues in the development — such as break-ins and robberies — she immediately took action.

“I did the petition to get surveillance cameras for every building,” she said. “I got over 600 people — 700 people (to sign). It’s supposed to keep out the undesirables.”

The “undesirables,” according to Pamias, are the “drug dealers” who invade the premises and stay with friends in several of the buildings.

“I have a whole apartment of drug dealers in my building — in my building,” she said. “I told the police, I told everybody. … There ain’t nothing much else I can do.”

Sibyl Colon, manager of Jacob Riis Houses, agrees with Pamias that drug addicts and dealers are a big issue in the community.

“(Pamias is) very proactive in trying to get rid of the drugs,” Colon said. “We have constant meetings with the police … and relay the information on.”

And while these drug problems are a source of frustration for Pamias, they’re not the only thing.

“The hardest part of my job is when (maintenance) stuff does not get done fast.  … That is what is bothering me. It’s the same thing, week after week,” Pamias said.

She said the problem stems from a lack of funding to hire the proper staff who knows how to fix the issues that plague Jacob Riis — “leaky walls, broken this, broken that,” according to Pamias.

“There’s a lot of work shortage here … because of the budget,” Pamias said. “They got the people that clean the grounds (working on) infrastructure problems. They need a contractor to come in and fix the leaks inside the wall because these people don’t know how to do that.”

But all of this wouldn’t be as hard to handle, she said, if it weren’t for the issues tenants have when they contact the maintenance call center.

Pamias said she has seen dozens of apartments with various problems, but no matter what the problem is, she always hears the same response.

“When I first came here it was beautiful. You know, nice, quiet. But now … it’s gone to the dogs, I think,” Pamias said. “It was like the nicest development in the whole Lower East Side … but now it changed. It has changed, trust me, over the years.”

Despite the problems, Pamias is determined to help Jacob Riis become the development she knew 43 years ago.

“She cares about her community. It’s a volunteer position, so you have to really care to do it,” said Sibyl Colon, manager of Jacob Riis. “She has definite leadership qualities, and the residents respond well to her.”

For more than 20 years, Pamias has served her community. But in only one month, Pamias’ reign could be up. The election for TA leaders is set for May, and the winners will be sworn in in June.

“At first, she wasn’t going to run again,” said Epifania “Fanny” Rodriguez, 62. Rodriguez is TA vice president and Pamias’ longtime friend. “But I told her she had to. She’s done a good job — she really has.”

When tenants and friends urged Pamias to run again, she gave in. She said she’d be happy to be president again, but for a shorter term.

Odell Pamias describes her decision to run for reelection.
TAelection_OdellTamias

“Two years — I think I can deal with that, right? I don’t think I’ll drop dead in that time,” she said, erupting in laughter. “That’s all I can say. And if they still want me, they vote for me.”

[…] Odell Tamias: standing up for the residents of Jacob Riis (Pavement Pieces). […]