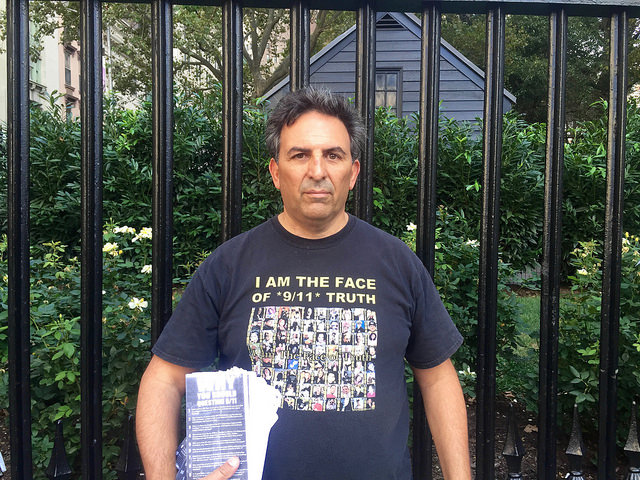 Michael Arnold, of Atlanta, Georgia, believes the World Trade Center was blown up by demolition. He handed out fliers near ground zero today, the 15th anniversary of 9/11. Photo by Eli Kurland

Today is the 15th anniversary of 9/11 and at the northern edge of the World Trade Center complex, colorful signs elicit ugly stares or thoughtful solidarity – depending on who you ask.

This is where you’ll find ‘9/11 Truthers,’ people who dispute the mainstream account of what happened on September 11, 2001. Their main allegation is that the Twin Towers and Tower 7 collapsed from a controlled demolition, and the plane crashes were just a diversion. Truthers come to this spot every Saturday with signs, t-shirts, pamphlets and of course, talking points. Today, on the 15th anniversary of the attacks, they are especially vocal.

“I was devastated when I learned the truth,” said Michael Arnold,50, who works as a counselor for special needs students in Atlanta, Georgia. He traveled to New York City to spread his message at the World Trade Center . “I was non-functional and almost got divorced. Then I spent way too much money on billboards and fliers. My goal is ju–“

He abruptly stopped talking, cocked his head towards a passing group of men in formal military attire and shouted, “Building 7 came down in less than 7 seconds! Controlled demolition!” Then he picked right up where he left off. “Sorry, I had to tell them. Anyways, my goal is justice – spreading the message as far and wide as possible.”

Arnold discovered the 9/11 Truther movement because his wife told him to get a hobby, so he started routinely reading political filmmaker Michael Moore’s blog about social issues. People would discuss the Truther movement in the comments section of articles. It sucked Arnold in and he became one of the regular commenters, posting Truther literature and combing over what was provided by others.

“It blew my mental circuit boards,” he said. “I couldn’t believe what I was reading.”

He’s the salesman of the group. but when he talks about why he’s here Marty speaks from the heart.

“We don’t do this because we’re nuts,” he said. “We do this because we love humanity. We love the world. We just don’t like being lied to. I know we’re ridiculed, but we’ve got architects in our movement, we’ve got college professors, independent journalists, military guys, ground zero guys who were here and felt the explosion, and saw the buildings go down. We’re a microcosm of society. We dug a little deeper than most. “We’re speaking up!” 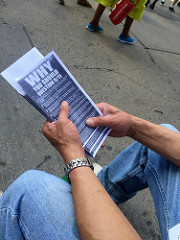 Claudio Marty displays a copy of the hundreds of pamphlets he gave out today. Photo by Eli Kurland

Marty said he watched the towers fall from his rooftop in Park Slope. His neighbors were on their rooftops too – steel workers, construction workers, cops, the inhabitants of a blue-collar neighborhood. Marty alleged the first thing these people said after collectively watching the towers crumble was that this was a controlled demolition.

“We know construction and we’re not stupid guys,” he said. “We watch the Science Channel and we’re mechanically inclined. We have common sense. We all said the same thing, but the television told us something else.”

Ten years later, Marty was watching a business television program and for the third time that month, people called in to ask the host’s opinion about the mainstream account of what happened on 9/11. Marty said architects and engineers were calling in to inquire too. The program had nothing to do with 9/11 or politics. Marty’s interest was piqued and there was no turning back.

Marty now runs his own advertising company, but has shrunk his client roster down to a quarter of its previous size so he can devote more energy to the Truther movement. Like Arnold, the movement is Marty’s lifestyle and he said he’ll never stop.