The battle against sodium in NYC begins 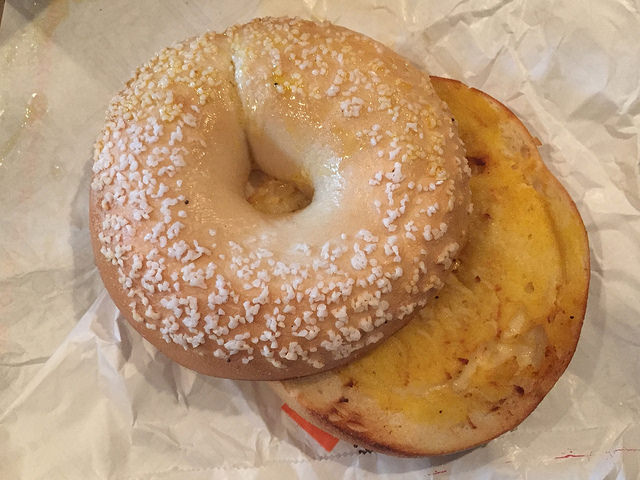 Salt Bagels at Dunkin Donuts exceed the daily limit of 2,300 milligrams of sodium at 3,380 milligrams. Photo By Leann Garofolo

The aroma of fast food wafting out onto the sidewalk during a busy day in New York City may become less enticing to customers once they walk in to take a look at the menu and see an ominous black label marked next to some of their most guilty pleasures.

As of Dec. 1, chain restaurants in New York City must display a warning label in the form of a black, triangular salt shaker next to menu items containing more than the recommended daily limit of 2,300 milligrams of sodium, or one teaspoon.

Juicy cheeseburgers, tender chicken nuggets, submarine sandwiches, decorated salads, and many baked goods are laden with sodium chloride, or table salt, which can cause serious health complications like hypertension better known as high blood pressure, when consumed in excess.

“A third of the United States population has hypertension,” said Dr. Howard Weintraub, a cardiologist at New York University Langone Medical Center. “Hypertension is what everybody is worrying about.”

According to the American Heart Association, hypertension due to a high sodium diet is the number one cause of death worldwide. Other cardiovascular risks include heart failure, stroke, osteoporosis, kidney disease, and stomach cancer. 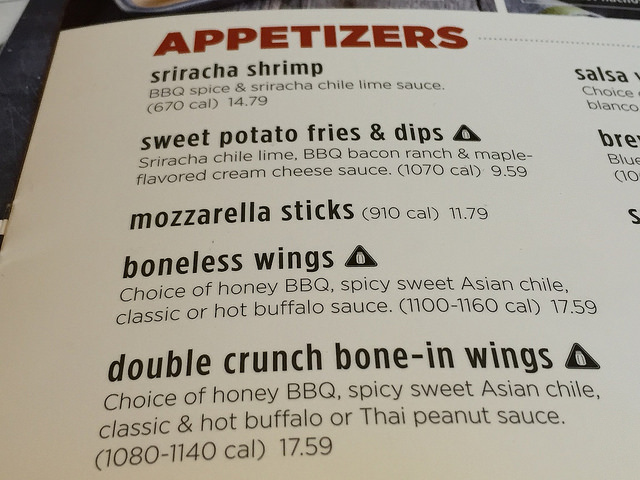 Applebee’s was the first chain restaurant to implement the salt warning labels, and their most popular appetizers are laden with dangerous sodium levels. Photo by Leann Garofolo

New York City has been a health trendsetter in the past few years, passing restaurant regulations to encourage better meal decisions such as posting calorie counts on menus and restricting trans fat in restaurant food.

The National Restaurant Association was not entirely pleased with the new sodium regulation. In a statement released in early December, the organization called the labels “burdensome and costly” with the potential to “confuse and mislead consumers” through “inconsistent application and inaccurate scientific distortions.”

According to Dr. Weintraub, that statement isn’t true.

“That has about as much validity as the tobacco industry saying that putting labels on cigarettes is unnecessary,” he said. “They’re not putting it on everything. They’re putting it only on the foods that are the most egregious examples of excessive amounts of sodium.”

Rebecca Appleman, a registered dietician, in Manhattan and co-founder of the “Instagram for Nutrition” app Honey, weighed in on the sodium epidemic in restaurants.

“Excess sodium mainly comes from processed foods and dining out,” said Appleman. “Hopefully by restaurants labeling high sodium foods, they will also be forced to revise their dishes and make sure they are suitable for our daily requirements.”

Adnan Islam, a manager of Dunkin Donuts in the East Village, saw the benefits of the warning labels as two-fold for both business and health reasons.

“It’s necessary for me actually,” he said. “I have people ask questions so I don’t want to be the person that [doesn’t] have the answer.”

He said that as a manager, being unaware of what goes into the food “doesn’t look good for anybody.”

“Customers should know what goes into their food,” said Islam. “What calories they’re eating, [where] is the product coming out from, what it’s made of, it’s a good thing.”

Dunkin Donuts had only two items required to be labeled for sodium, the Salt Bagel and Salt Bagel Twist, which contained 3,380 milligrams of sodium according to the site’s nutritional information. Islam’s location did not carry either one in-store at the time the label was enforced, but will have to display the label when they come in.

Philip Romeo, 24, enjoyed a plain bagel with cream cheese at the East Village Dunkin Donuts while on break from work, and said he believed the labels will make him more likely to visit the restaurants that display them.

“New York is a fast place,” said Romeo. “I’m not really spending too much time looking at, you know, ingredients and things like that,” so to him, having a simple label indicating the sodium content seemed to be a very “good thing.”

Romeo thought the labels had the potential to make an impact on the health of New Yorkers, even if it were just a small percentage.

“I’m pretty sure there’s going to be someone, an amount of people, that are going to be affected by this rule in a positive way,” he said. “And it’ll, you know, help them get healthier, so I’m all for that.”

As a dietitian, Appleman agreed that the labels will educate consumers about what goes into their food when ordering out.

“There are great benefits to the new sodium labels in food chain restaurants,” she said. “One of the major benefits is that it brings awareness to the general population about the content of the foods they are eating. Many people don’t realize how much sodium they are consuming in a day, mainly because it’s often well disguised.”

Efrain Segovia of the Bronx was enjoying a Happy Meal at McDonald’s in the East Village, but he said he understood the danger of the food he was eating and why warning labels could pay off. The chain has not yet displayed the sodium labels, but would have to do so on items such as the 40-piece McNugget and some Big Breakfast choices. 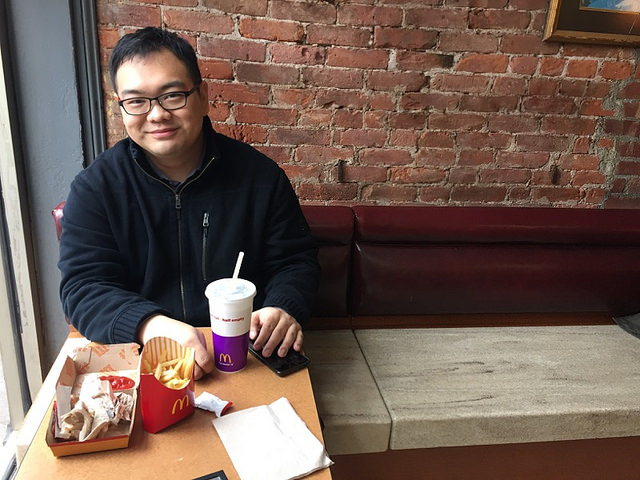 Edward Zhang, from Secaucus, NJ, was all smiles after finishing up a Double Quarter Pounder at a McDonald’s in the East Village. Photo By Leann Garofolo

“I think its a great idea, especially for people who live off of McDonalds,” he said, gesturing to his Happy Meal box with an ironic laugh.

Segovia thought the labels would be necessary given the links of sodium to cancer and other diseases, and would make him rethink his choices in the future.

“Processed food is not the way to go,” said Segovia. “The same as the labeling for calories, you know. You look at something and say, oh wait a minute [there are] just too much calories and it’s not even good calories, it’s bad calories.”

While many New Yorkers shared positive views on the salt warning labels, some were indifferent towards the new regulation. Edward Zhang, of Secaucus, N.J. had just finished a double quarter pounder and medium fries at McDonalds in the East Village and he had no regrets.

“No matter how [many labels] you put on the food, how many items you list, if you want to have something, you have something,” said Zhang over his half empty food containers. “It doesn’t matter.”

Zhang thought that at best, the labels would help him cut back and minimize the times he chooses to indulge, but he is surely “not eating it every other day.” If he ever started feeling badly about his calorie intake, he would hit the gym.

Appleman suggested a few tips for New Yorkers to maintain a healthy lifestyle on the go.

“Planning ahead is key when it comes to a busy schedule,” she said.

High quality snacks such as “nuts, dried fruit, whole grain crackers, and whole grain cereal bars” can be bought in bulk and paired with convenience store items such as fruit, cheese, and yogurt for a healthy and inexpensive meal for busy schedules.

“There are so many tasty [alternatives to salt]. Fresh or dried herbs go a long way in terms of flavor, as do vegetable oils and vinegars,” Appleman said. “For veggies, simply roasting them brings out their natural flavor and enhances their texture without adding any salt.”

Dr. Weintraub said he hoped the labels would bring a degree of awareness, but reducing sodium alone will not be completely impactful unless lifestyle changes are made along with it.

“Maybe someone will get the message that they’re eating incorrectly and maybe that will translate to somebody who has better health behaviors,” he said. “They’ll walk more, they’ll walk stairs instead of riding an elevator. They’ll get off the subway or the bus a stop early and walk instead of riding.”

Chain restaurants have 90 days to comply with the sodium warning labels, but the city will not begin handing out fines until March 1.