At Pima County's Office of the Medical Examiner, two giant refrigerators store unidentified bodies of dead immigrants. The process of finding a match between a missing person and a body is the most difficult task for coroners, said Bruce Parks, the county's chief medical examiner. Photo by Meredith Hoffman.

No headstone dare tell the story of the dead, immigrants killed by the ruthless desert sun as they trekked toward new lives in the United States. Since 2000, an average of 180 bodies have been found each year in the Pima County, Ariz., desert.

A silent humanitarian crisis, their deaths traumatize loved ones and all who encounter their remains.

“I just want to know where he is, even if he is not alive,” said Denia Corral from her home in Hermosillo, Mexico, where her brother Armando left July 7 to find a job in America.

After a year of unemployment, Armando left Hermosillo on foot as part of a larger group trying to make it 160 miles to the border. But days later, the group returned, dehydrated and defeated by the record heat.

Insisting he could make the journey, Armando continued alone. Then his two daughters, sisters and mother stopped receiving his text messages and began to worry.

Armando disappeared in July, a month infamous for its deaths. The same month he vanished, the Pima County Office of the Medical Examiner recovered 59 bodies from the desert. In addition, it received 80 missing person reports this summer.

Only two of those cases have been resolved. The Mexican Consulate has received even more missing person reports, but hasn’t given them to OME since July 15, according to Reineke.

“The Mexican Consulate is doing their own investigating, but they don’t have forensic training,” said Robin Reineke, who works at OME matching missing person reports with forensic information gathered from bodies by physicians.

Reineke doesn’t have Armando’s name in her database, a giant spreadsheet of 787 unsolved cases.

The Consulate can examine faces of people that still have flesh, but bodies lost in the desert in July usually decompose too fast for facial recognition.

In other words, even if Armando’s body is at OME, there is no way to identify it.

OME and the Mexican Consulate coordinate and share information, including DNA tests they intend to store in a database, but holes in communication can sometimes cost families their chance at finding closure.

“We’ve looked for him in the desert,” Corral said, her voice trembling. “We went everywhere, but we don’t tell my mother, because when she found out we were looking, she was very upset. My sister even went to the U.S. to talk to the Consulate, but she found out nothing.”

“Maybe she was sold into sex slavery,” and, “Maybe he was drafted into the U.S. Army,” Reineke has heard families say as they speculate about the whereabouts of loved ones.

According to Reineke, families of the missing experience “ambiguous loss,” an unresolved loss similar to post-traumatic stress disorder, “but the traumatic event occurs every day because the person is lost every single day, and your mind is going through these horrible scenarios every day.” 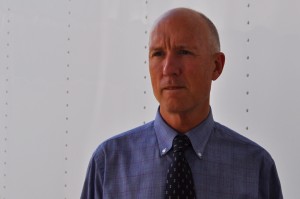 While the families are left to their imaginations, Chief Medical Examiner Dr. Bruce Parks tries to ignore the tragedies in front of him as he examines bodies on a daily basis.

“You just have to numb yourself and focus on trying not to think about the human — the personal loss — to do your job,” said Parks, who has worked at the office since 1986.

Stoic and neat in his starched blue shirt, Parks, who speaks in cold numbers and scientific terms like “specimen,” opened a giant refrigerator that reeks with bodies in plastic pouches on racks.

“Careful, if you go in the stench will get on your clothes,” said Parks, standing outside the gleaming metal door. “It’ll stay there all day.”

For years, bodies with slight hope of identification may stay in storage, before they go to the cemetery for unidentified persons. Since 2007, the county has cremated bodies to save money and space.

Border crossers are only one-eighth of the OME’s cases, Parks said, but the grueling challenge of identifying them takes most of his time. Parks and five other physicians compare teeth to missing persons’ dental records and take DNA samples of bodies with probable identities.

Parks inevitably encounters deeply personal stories. On one recent lunch break, he and Reineke watched a video of Nelson, a missing 13-year-old Guatemalan boy who tried to cross the border to join his mother working in Phoenix.

“He was so cute.…We were trying to pause the video right when his mouth was open because we don’t have dental records or a smiling photo…and we’d found a skull (of a 13-year-old) that has one of two front teeth that didn’t grow,” Reineke said.

But Nelson’s image in the video didn’t match the skull in the office.

“That means we have a missing 13-year-old boy and a dead one, and they’re not the same person,” said Reineke.

Policemen also confront deaths as they scour the desert for what they call “UDAs,” or “undocumented aliens.”

“I recover 10-7s, or ‘out of service’ — well, I guess I should call them deceased persons,” said Officer Gerardo Salazar of the Tohono O’odham Nation police. In his high pickup truck, he sped down dusty roads of the Native American reservation, where 44 of the 59 bodies were recovered in July.

“It gets pretty hard to deal with, especially the smell,” he said, pathos creeping into his voice. “Like marijuana has its unique odor, this has its unique smell. It’s just overwhelming. You know that person was alive before.”

The last time he recovered a body, one sweltering August morning, the Border Patrol called him to a remote precipice where two seized immigrants said their friend had died.

Salazar shuddered, recalling the image of the dead man.

“I’m connected to it as being Mexican. I know how hard it is to come to the U.S.,” said Salazar, whose parents immigrated to the U.S. from Mexico, where he still has family.

It is harder to come this decade than ever before, said Julian Etienne, a spokesman for the Mexican Consulate.

“We have fewer people crossing and more people dying,” he said. 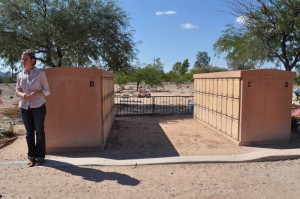 Robin Reineke, who works for the Pima County medical examiner, stands in front of two boxes holding cremated remains of unidentified border crossers. Since 2007, the county has cremated bodies to save money and space. Photo by Meredith Hoffman

In the mid-1990s, the U.S. government developed “prevention through deterrence,” increasing the number of Border Patrol officers in border cities.

But the “natural deterrent” of the desert became a new treacherous obstacle migrants tried to overcome.

With the “funnel effect” of immigrants crossing through Arizona, deaths shot up, according to University of Arizona Professor Rachel Rubio-Goldsmith.

In the 1990s, an average of 14 bodies were found each year in the Pima County desert. With the “funnel effect,” that number jumped to 180 this decade.

But, desperate for work, migrants still attempt the crossing every day. Rubio-Goldsmith says the problem is systemic.

“The responsibility of the worker is to feed his family,” she said. “People all over the world are saying, ‘I’m not going to sit here and die. I’m going to go out and find a way to survive.’ Those people are the way to the future — they’re tackling the human side of globalization. The future is (that) we have to find a new way to control borders.”

The unmarked bodies in the cemetery are more than nameless individuals, she said.

“The deaths are something we’re all responsible for. Personal choice is always involved,” she said. “But we can’t place sole responsibility on the individuals when we have structures in place that make this happen.”

Meredith,
As a reporter, and a darn good one at that, I realize it is not your job to find a solution to this problem however, I am curious to know if you returned from Arizona with hope that the people with that responsibility are making any progress towards mitigating this dreadful situation. Given that we have businesses that need skilled laborers and Mexicans willing, able and in many cases desperate to work, is there not a legal process by which our Mexican brothers and sisters could be awarded a legal work visa that might benfit us all and preclude this human tragedy? Thank you for keeping us informed.
Cynthia Mosteller