Deported migrants wait in line for a hot meal at the Kino Border Initiative. Photo by Kelly Knaub

Two weeks ago, the 31-year-old man was caught in the desert by the U.S. Border Patrol and deported to Nogales, a small Mexican town across the Arizona border. Six months ago, Salinas, who had worked illegally as a cook in Delaware for five years, risked a trip to Mexico to visit his family. He was heading back to Delaware when he was caught.

Like his father and grandfather, Salinas spent most of his life as a corn farmer in Domingo Arenas, a town in Mexico’s east-central state of Puebla. Farming paid off during the first 15 years of his career. But then a freer market forced Sosa to compete with his American counterparts, farmers using modern machinery and subsidized by the U.S. government. Eventually, things got bad.

“There wasn’t any work in Mexico,” Salinas said.

In the five years he’s been gone, things haven’t changed. “This year there isn’t anything,” he said. “Nothing.”

Salinas knows about Arizona’s controversial anti-illegal immigration law, known as SB 1070, which continues to take center stage in the national immigration debate. But Mexico’s enduring poverty and joblessness — the reason why people like Salinas leave Mexico for America — remain largely absent in the national conversation.

When the North American Free Trade Agreement, or NAFTA, was enacted in 1994, proponents of the agreement promised it would create jobs, attract foreign investment and stabilize Mexico’s economy. They anticipated immigration to the U.S. would decrease.

Initially, the agreement boosted jobs at foreign-owned factories in Mexico, especially those congregated along Mexico’s northern border. But Mexico’s farming heartland was hit hard. Thousands of Mexican farmers like Salinas were unable to compete with the cheaper American produce, including corn, that flooded Mexico’s market, as cross-border tariffs on U.S. agricultural imports vanished.

In all, Mexico has lost some 2.3 million agricultural jobs since NAFTA began, according to the National Institute of Statistics and Geography, Mexico’s statistics agency.

Manuel Pérez-Rocha, a fellow at the Institute for Policy Studies in Washington, said, “There isn’t an interest by either the U.S. government or the Mexican government to carry out structural changes to the economies so that trade stops benefiting only the intra-firm trade of large corporations, mainly manufacturing companies.”

Peter Neeley, a Jesuit priest, sees the economic realities many Mexicans face on a daily basis. He helps run the Kino Border Initiative, a nonprofit shelter and soup kitchen for recently deported migrants. It’s where Salinas has eaten for the past two weeks as he prepares to trek back to his town of Domingo Arenas, some 1,500 miles away.

Neeley said that when people talk about immigration, the economics of it, they are not doing the “real hardcore analysis.” He added: “It’s costing us a lot more to detain and hold these people than it would be if we invested in Mexico, and if we cut NAFTA. If you cut subsidies out of our corn and milk and dairy products, you would change the equation completely.”

Salinas had never heard of the NAFTA agreement. He only knew that the owner of the farm he worked for all of his life could no longer profit from corn. If he had found work elsewhere to support his family, Salinas said that he would not have crossed the border in search of under-the-table employment.

“We’re only going to work. I know that a lot of jobs need us, because Mexicans are good workers anywhere, on farms, in restaurants,” Salinas said. “And it’s so we can support our families, and move forward and give a better life to our children.”

Neeley also said that most of the people at the migrant shelter wouldn’t be there if the economic situation in Mexico weren’t so dire. “Nine out of the 10 guys in here would not come if they could stay home,” he said.

Over lunch, Salinas talked about his first journey to the U.S. five years ago. He and his wife hiked for two days in the desert.

Equipped with water, food and clothing, they rested during the day and hiked through the night. Salinas said he didn’t see anyone else on the path, only the remains of a migrant who tried to make it before them. He couldn’t say whether it was a man or a woman because the body was too decomposed. 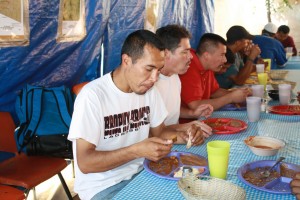 After making it to Los Angeles, Salinas and his wife flew to Delaware and got jobs at local restaurants. Salinas worked as a cook at a Friendly’s restaurant for five years, earning $8.50 an hour and logging 30 to 35 hours a week. He then worked an additional 30 hours a week for $7.50 an hour at Five Guys Burger for the past two years. His wife, who lived in the U.S. for three years, worked at Taco Bell.

When Salinas crossed the Arizona border two weeks ago, he traveled with four other migrants he encountered along the way. When the Border Patrol found them, Salinas said, the federal agents dumped out all of their food and stomped on it with their feet. According to Salinas, the agents yelled, “I don’t like Mexicans!”

“No one would want to be treated like that,” Salinas said. “There should be more humanity.”

After he was detained for two days in an Arizona jail, Border Patrol agents gave Salinas a pamphlet that outlined the policies of the state’s recently implemented SB1070. Then they deported him to Nogales. Salinas joined the ranks of the 282,666 other undocumented Mexican immigrants deported from the U.S. in the past year.

Despite the economic consequences NAFTA has had on rural farmers like Salinas, numbers exist showing Mexico has benefited from the trade agreement. According to the U.S. Department of Agriculture, agricultural trade between Mexico and the U.S. increased under NAFTA from $7.3 billion in 1994 to $20.1 billion in 2006.

But Pérez-Rocha, from the Institute for Policy Studies, said that NAFTA’s success should be measured in “qualitative” rather than “quantitative” terms. “With NAFTA, trade has increased,” he said. “But it has concentrated in a few corporations while displacing thousands or millions of medium and small producers.”

Father Neeley agreed that large corporations, not small farmers like Salinas, benefit from NAFTA’s trade policies. “When you start talking about NAFTA, there’s a lot of money going into Mexico from the United States, but it’s going into the hands of a few big agricultural people, the big corporations, the owners,” he said.

Salinas finished his lunch and headed back out to the hot desert sun. Tomorrow he is heading home to Puebla, where his wife and four children await him.

“Life in Mexico is hard,” he said.

With 12-20 million illegals taking U.S. citizens’ jobs and draining our Social Security funds, life in America is hard, too.

If anyone does not believe welfare benefits for illegal aliens are being paid from Social Security retirement funds of U.S. citizens, please look at this article and then look up Social Security on Wikipedia.