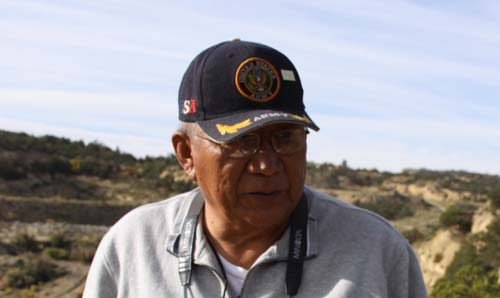 Teddy Nez's home was near a uranium mine.

Since 1982, Nez and his family have been breathing in uranium particles and drinking uranium-contaminated water. They didn’t know the land that surrounded their home in Church Rock, N.M. – located on the 27,000 square-mile Navajo Reservation – was slowly killing them.

“We just assumed this was the way people lived,” Nez, 65, said. “But we came to find out the human risk factor.”

Nez has colon cancer, which he believes was caused by uranium contamination. From roughly the 1940s to the 1980s, the federal government contracted private mining companies to blast uranium ore out of the rocky terrain of Navajo Nation for the development of nuclear weapons during the Cold War as part of the top-secret Manhattan Project.

During that time, nearly 4 million tons of the radioactive ore were mined from the area.

Decades later, the deadly health risks of uranium mining are starting to materialize. Workers who mined the rock are being diagnosed with cancer, respiratory problems, liver disease and more.

Perhaps most troubling is the effect on young children, who are prone to developing Navajo Neuropathy, a rare degenerative disease of the peripheral nervous system caused by breathing in uranium particles in the air and drinking water contaminated by the deadly metal. Symptoms include the shriveling of hands and feet, muscular weakness, corneal ulcers, delayed walking, infections and stunted growth.

The disease is primarily diagnosed in children in their first year of life – and 40 percent of these children die before they reach their 20s. There is no cure.

Nez said his symptoms began with an itchy rash in 1995. The rash turned into open sores that wouldn’t go away.

“I went to the doctor; he said it was just a rash and gave me ointment,” he said. “I use the ointment, but when it’s gone, the rash is still there.”

Nez soon realized he wasn’t the only one suffering from this rash. His neighbors had similar symptoms.

Nez was diagnosed with diabetes, then colon cancer in 2002. Both are said to be caused by exposure to high levels of radiation.

“At the beginning, I was afraid, scared,” Nez said of his cancer diagnosis. Today, he says a Navajo healing ceremony cured his colon cancer.

“I feel I am 100 percent cured,” he said. “Doctors tell me I still have cancer because I have not been treated by Western medicine.”

The L.A. Times reported in 2006 that cancer rates among the Navajos, once thought to be immune to cancer, doubled from the late 1970s to the early 1990s.

Uranium mill tailings, leftover material from mining, are a radioactive, sand-like material that pose a variety of risks to anyone working or living in the vicinity of the mines, the EPA said.

Although Nez never worked as a uranium miner, years of living so close to the mines put him at serious risk of exposure and contamination.

The mine in Church Rock near Nez’s home is the biggest of the nearly 500 mines in Navajo Nation, said Lillie Lane, senior public information officer for the Navajo EPA.

The area around the Nez home was tested for radiation — and it was found to have 120 times the national amount of acceptable radiation. 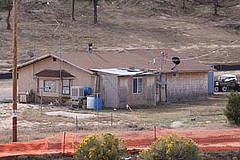 Nez said his children and grandchildren played in the land around his home, land that is teeming with deadly radiation.

While medical experts guess that approximately half the Navajo population has suffered some sort of health problem as a result of uranium exposure, specific percentages of those who are sick and what ails them are not easily determined. Most Navajos do not have access to health care, and even those who do rarely seek treatment.

In 2007, as part of the government’s five-year plan to clean up uranium-contaminated homes, Nez and his family were relocated to an apartment in nearby Gallup, N.M., so that the Church Rock mining site could be cleaned up.

Today at the site, bulldozers haul loads of uranium-contaminated dirt, and a single worker washes the area with water from a fire hose.

Nez and his family plan to move back into their home Dec. 23.

Nez has since joined the uranium activist movement and is now the president of the Red Water Pond Road Community, working to educate his fellow Navajos about the dangers of uranium contamination.

And he is angry.

“Some of my brothers say that the Indians are expendable,” Nez said. “(The government) can just use us as guinea pigs for anything they come up with. We need to be listened to.”

According to Rondon, Southwest Research was monitoring the uranium problem in Navajo Country as early at 1971. At the time, Indian Health Services said the radon levels were too low to pose a health risk, she said.

“I just didn’t believe it,” Rondon said. “This is why I sought out other experts who had experience working with radiation.”

According to Lane, the issue gained national attention with the Waxman Congressional Hearings in 2007, led by Rep. Henry Waxman (D-Calif., 30th District). The hearings, which examined the negative health and environmental effects of uranium mining on the reservation, shed light on the plight of the Navajo people for the first time.

Now, the Navajo EPA, the national EPA, the Abandoned Mines Land Program and the United States Army Corps are collaborating to tackle the enormous task of cleaning up the radioactive waste, Lane said.

In the 1980s, the group mapped out the areas with the highest contamination. They are working on cleaning up those areas first, Lane said. Over the years, various governmental agencies have worked to tear down and rebuild homes built with radioactive rock. However, these efforts have never been a centralized effort – a reoccurring problem in the cleanup process.

Lane said that mapping and data collection are a necessary part of the process, which takes time.

It’s only in the last two years that any serious cleanup has gotten underway.

“The problem with uranium mines and mining is that it involves a lot of communities,” Lane said. The wide scope of the problem has slowed down the process, she said.

“They knew (the danger),” Nez said of the federal government. “All they were interested in was money. It’s like what’s been happening to the native people since 1492. We have just been pushed aside.”

While Rondon agrees that some progress is being made, she says it has stalled over the years.

“(Rebuilding) is going on,” Rondon said. “But not as much as it should. They’re always making the excuse that they don’t have the funds. But it’s been almost 40 years of waiting.”

But Lane said the Navajo EPA is doing what it can with the resources available.

“I think the (Navajo) EPA is doing as much as they can given the funding they’re given,” she said. “I think the government does not realize how big the problem is … because we’re so remote and our nation is so big.”

Rondon adds that “institutionalized racism” is a major barrier to the cleanup and relocation of Navajos away from contaminated land.

“Public policies either work in your favor or work against you, depending on the color of your skin,” she said.

Perhaps the most concrete example of “institutionalized racism” was in 1979 when there was a massive uranium spill in Church Rock, Ariz., on Navajo land – the largest peacetime release of radiation in history. A dam holding back thousands of gallons of uranium-contaminated water burst, and 94 million gallons of radioactive water was released into the Rio Puerco. This massive spill occurred the same year as the Three Mile Island accident in Pennsylvania, which was cleaned up almost immediately. But 40 years later, the Navajos are still waiting.

The Navajos’ spiritual connection to the land, which is as sacred to them as Jerusalem is to the Jews, Christians and Muslims, compounds the problem of cleanup.

“We must do (cleanup) in a sacred manner,” Rondon said. “This industry has stepped on us so much. All we really have is our spirituality.”

Most Navajos won’t leave the reservation, even if it’s slowly killing them.

“We’ve been here for seven generations,” Nez said. “We’re not leaving. We’re connected to Mother Nature. That’s how it always was, and that’s how it’s always going to be.”

As a uranium activist, Rondon understands the danger of uranium; as a Navajo, she recognizes her people’s unbreakable ties to the land.

“It’s not that easy for us,” Rondon said. “We’re really connected to it. We can’t just get up and leave. We have such a deep connection to the land, the earth. It’s like, (if) we go somewhere else, (we) die.”

Thanks for the awesome post. I hope you have an amazing New Year!!. Be sure to put on your tactical body armor with all those jerks shooting their shotguns above their heads.

How swiftly can someone start to witness the results from utilizing it?

There are a few very good arguments debated here.
Usually, I am not awfully fond of politics. but, every so often all of us have to take notice. Good points raised here, thank you.

I am bare impressed with the article I have just read. I wish the author of pavementpieces.com can continue to provide so much practical information and unforgettable experience to pavementpieces.com readers. There is not much to tell except the following universal truth: The keyboard is mightier than the pen, and the pen is mightier than the sword, but the atom bomb kicks ass… I will be back.

Thanks for spending the time to describe the terminlogy to the newbies!