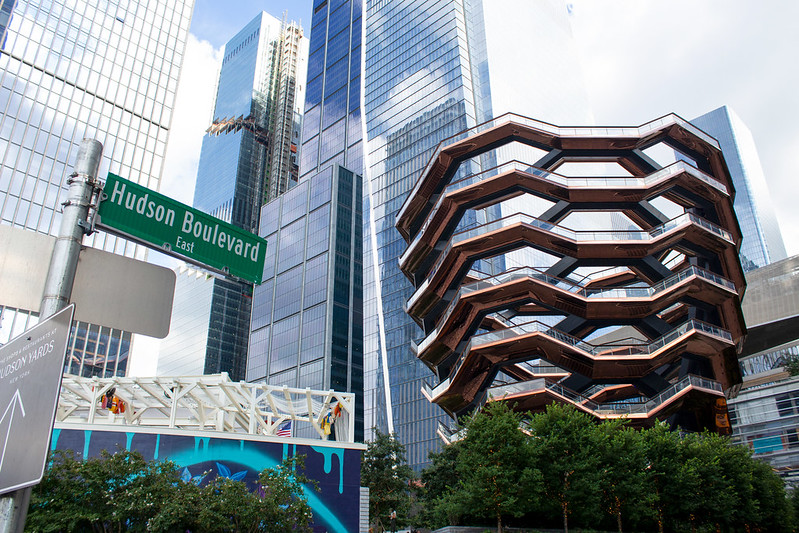 The Vessel, a 150-foot landmark in Hudson Yards, stands out amidst the glass buildings that surround it. The tourist attraction has been the site of tragedy, with four suicides in the past two years. Photo by Michelle Ng-Reyes.

Two months after a 14-year-old boy jumped  to his death on Hudson’s Yards’ the Vessel, a popular tourist attraction, remains closed.

The 150-foot tall climbable sculpture first opened in March 2019 and quickly became a favorite New York tourist attraction. But since then, the Vessel has been closed off and empty since the boy became the fourth person to jump off the sculpture and take his own life on July 29.

“It’s tragic,” said Miranda Sapoznik, a Manhattan resident who visited the Vessel last month. “It’s like seeing a memorial on the side of a road, and knowing someone lost their lives in that very spot. It obviously made me very sad.”

The day that Sapoznik visited the Vessel, it was closed off to the public and no one was able to climb it. It was only a few weeks after the last suicide. Now, the chances of the Vessel ever being able to have visitors scale its steps again seems unlikely, with no reopening date announced  from the Vessel, Hudson Yards or its development companies.

Its architects and stakeholders are at a standstill on how to make the sculpture a safe tourist attraction without taking away from the integrity of the original purpose of the public art piece which was so “people can enjoy new perspectives of the city and one another from different heights, angles and vantage points.”

Many have called for the developer Related Companies to redesign the Vessel in order to make it safer for the public. The primary idea is to raise the glass banisters, which are currently waist-high on an adult, to over eye level.

“The only thing that’s going to work is raising the height of the barriers,” Lowell Kern, the chair of Community Board 4, which represents residents of the area, said to AP. “At this point after four deaths, artistic vision doesn’t matter any more.”

The “artistic vision” Kern mentions is the main reason why Related Companies has not decided to move forward with the redesign and reopening of the Vessel yet. The higher banisters would distort and obstruct the view, which is the main selling point. But, Sapoznik said this simply is not enough to justify not modifying the sculpture.

“Four suicides in just over two years is a lot,” she said. “The Vessel serves no purpose besides looking pretty and giving visitors a nice view from the top. I think many would agree when weighing the pros with the cons, the benefits of reopening when weighed against the cost of another human life lost, do not prevail.”

Although the Vessel tried to reopen after the third suicide with new measures in place — such as implementing a buddy system, placing mental health signs and resources around the sculpture and adding a $10 admission fee — a fourth suicide still happened, making the need for greater protections far more apparent.

“I knew one of the people that jumped off the Vessel,” Mara Chiriac, a Manhattan resident, said. “He was another student, just like me. We all found out through an email from the school and I know myself and many others were devastated when we found out, because none of us had ever really dealt with anything like that and it was someone we all knew.”

To many people like Chiriac, the Vessel represents the loss of their loved ones. It serves as an ugly reminder of the realities of suicide and the struggle many go through alone.

“All I can think about is how he got on a train to New York City, and the time and effort it must have taken, and he had time to change his mind,” Chiriac said. “But he didn’t change his mind, he did it.”

While Heatherwick Studios, the architectural designers behind the Vessel, find a way to make the sculpture more structurally secure and safe for future visitors, many other architects have also discussed whether the Vessel should ever be reopened, or even left up as a monument and instead be destroyed. Architectural Record’s editor-in-chief Cathleen McGuigan wrote in an op-ed released shortly after the last tragedy of the Vessel calling for its demolition.

“Not only does the tragedy of four suicides mark the Vessel… but the idea that this gargantuan chunk of shiny, copper-colored steel is a sculptural amenity for the citizens of New York is the biggest folly of all,” she wrote.

Even if the Vessel is able to change large parts of its physical appearance and improve its safety, its tragic past may affect its future and discourage others from visiting or returning.

“It’s definitely not safe, like I wouldn’t bring kids around it or anything like that,” Chiriac said. “I don’t know if the Vessel should reopen… New York has a lot to think about, and a decision needs to be made, but it needs to be made well and thought about.”

Perhaps if they raise the glass barriers but have circular openings cut into the glass at different heights and spaced a few feet apart so that visitors can have a clear viewing area and space to photograph from but yet the circular openings perhaps 12″ in diameter would be good and also would not allow someone to get thru the opening, preventing future suicides. The panels with the cut outs throughout the entire structure might even add some artistic attribute to it.

How many people have jumped to suicide deaths off buildings and especially bridges for example how many have committed suicide jumping off the George Washington Bridge alone and yet it has not deterred people from driving over it nor have we closed it or demolished it.

Finally how many people have committed suicide by jumping in front of the subway off a s tr ation platform and yet there is still not one station that the city has developed, erected or established any additional safety barriers to prevent these suicides and now we have even had several homicides from people being pushed in front of or into the subway and yet still no added safety measures or even security of any sort has been increased or added due to this. But yet the same safety panel wants to close and demolish the Vessel after 4 suicides. It does not deter people from using the subway and the city has shown little concern to increase safety measures in any way.