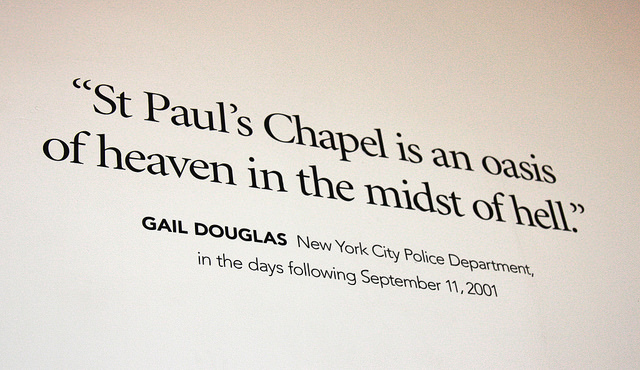 A quote on the wall of St. Paul’s Chapel. The Lower Manhattan Church is steps from Ground Zero and was a haven for rescue workers and volunteers following the attacks.  Photo by Stella Levantesi

Since the collapse of the World Trade Center 16 years ago, “The little church that stood,” also known as St. Paul’s Chapel, has become a beacon of hope for many. It served as a relief center for Ground Zero recovery workers until May 2002. And it’s mission is what Rev. Dr. William Lupfer, the rector of Trinity Church, called “the healing of memories” through physical and spiritual relief.

For years, people have been coming back to St. Paul’s Chapel on the 9/11 anniversary to remember. It stands just steps from Ground Zero, and miraculously, suffered no damage.

Chester Johnson is a poet who served on the governing board of the Trinity Church, which operates the chapel. He worked as a volunteer during the aftermath of the attacks.

On 9/11 Johnson was downtown, trapped for hours in his consulting firm not far from the south tower.

“What St. Paul represented to us and to the recovery workers was the reverse of what happened at Ground Zero,” said Johnson. “There was so much hate and evil in the attacks and St. Paul’s was a fountain of hope.”

During the 8-month cleanup the chapel was open 24/7 to workers who came to sleep in the pews and have a warm meal. The pews, scratched from the tools of rescue workers and volunteers are a memorial to the men and women who spent days and months at Ground Zero, searching for survivors amid the rubble and clearing the catastrophic site.

What these recovery workers needed more than anything were boots and foot care. The pit in Ground Zero was still burning as they worked and the scalding heat of the pile melted their shoes.

“I remember a high school sports coach from Alabama, he would gather up boots, put’em in his truck and drive up to New York City to bring them to St. Paul’s,” said Johnson.

Among torment and loss, St. Paul’s Chapel served as a sanctuary that brought people together.

“Seeing the big burly guys – these are tough guys – and just seeing their foot care, how their physical souls were taken care of, I think was an outward sign of what it meant,” said Lupfer.

After 9/11, the fence around St. Paul’s Chapel was emblazoned with pictures of people who died in the attack, poems and even pieces of clothing. Johnson wrote of  a “litter of the heart” in his “signature poem called “St. Paul Chapel” which has been used as a memento card of the memorial since 2002.

During the months of recovery, more than 10,000 volunteers worked at St. Paul’s. Doctors were giving out aspirin, helpers were offering parkas and head warmers if it got cold, priests were saying prayers and music echoed in the chapel, lifting spirits up. And as “a rescuer reaches for a stuffed toy to collect a touch,” Johnson’s poem reads, people kept bringing in tokens to commemorate the tragedy, making St. Paul’s Chapel a symbol of resilience and harmony.

“People think ‘can I reach closure?’ But the scripture doesn’t say we need closure, coming back every year is our form of being comforted,” said Johnson, referring to the passage in the Bible that reads “Blessed are those who mourn for they shall be comforted.”

“It’s a never-ending healing process, for the memory will never fade away,” he said

This morning, as the Bell of Hope resounded through the air, “The little church that stood” reminded passersby of its survival. And Johnson recited his poem. “It stood. Not a window broken. Not a stone dislodged. It stood, when nothing else did. It stood when terrorists brought September down.”