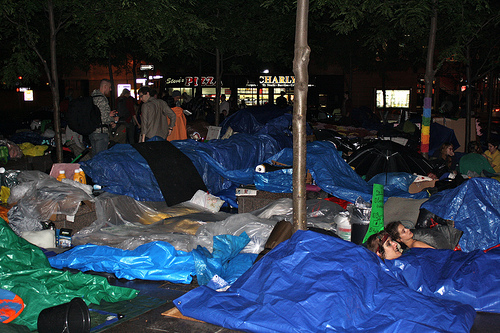 Amber Oestreich has been at the Occupy Wall Street protest for 11 straight days. She has no intention of leaving anytime soon. 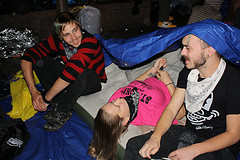 Brian James, left, Amber Oestreich and Dylan O'Keefe hang out on a half-inflated air mattress at Occupy Wall Street. None were sure of when the occupation would end. Photo by Chris Palmer

Oestreich was one of hundreds of occupiers hunkered down in Zuccotti Park in Lower Manhattan last night, and, like others who have lived at the site since the occupation began 12 days ago, she was not sure when it would end.

She sat with two friends, Dylan O’Keefe, 19, and Brian James, 23, both from Northampton, Mass. All three said they were there to express their dissatisfaction with government oversight of corporations and a lack of corporate accountability.

When asked what would constitute a successful end-point to their demonstration, there was no consensus.

“We’re here for as long as it takes,” said James.

Zina Goodall, 22, from Sunset Park in Brooklyn, has visited the site several times but hasn’t stayed overnight yet. She said the occupation was organized to get a reaction from the public, government and corporations, but wasn’t sure how to define a sufficient public response.

“I think there’s a lot of different opinions,” she said.

Charlie Goff, 59, flew up from Cuernavaca, Mexico on Wednesday morning after seeing that activist filmmaker Michael Moore had attended the occupation over the weekend. Goff said he was inspired by the dedication of the people occupying the site.

“People never demonstrate, they never do anything,” he said. “But this is so much more effective than a single march.”

Lying in a sleeping bag underneath a beach umbrella, Goff said the occupation had no end in sight, but he wondered aloud how long it could continue.

“It’s a big project to feed this many people,” he said, noting that much of the food was donated. “How long can that go on?”

Goff’s friend, Katherine Derby, 47, from Rochester, New Hampshire, said that she wanted to see reforms made to America’s capitalist system, but that no one person has the solution.

“A lot of people (here) are searching for answers,” she said. “Together, we can search for one.”

Togetherness and a sense of community were two things that many of the occupiers were eager to express. They explained how committees had been formed to take care of daily living concerns, such as food distribution, security and sanitation, and that the consensus-decision making model, with no hierarchical structure and open to expression of all opinions, was one of the defining features of the community. 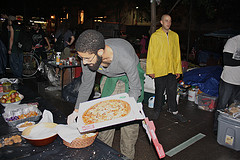 Emery Abdel-Latif, who volunteers on the food committee at Occupy Wall Street, puts a late-night snack out at the food table. Photo by Chris Palmer

But some wondered whether the growing number of occupiers would strain the effectiveness of the operation, and how long the success could last.

Daniel Levine, 22, from Sunset Park, Brooklyn, said that several committees have duties that overlap or are somewhat redundant with other groups.

“Maybe there are too many people making decisions,” he said. “But it’s really worked well so far.”

Colby Hopkins, 32, of West Harlem, said that general assembly meetings – held twice daily to discuss topics such as goals for the occupation and community rules – can be long and difficult because there is a wide variety of opinions among occupiers.

“There really isn’t a common message,” he said.

Despite these challenges, most occupiers were at least united in the idea that their demonstration was about more than just forcing corporate or government reforms.

“This experiment is useful,” said Alan Knox, 23, from Kensington, Brooklyn. “The example is good for people to see.”

Hopkins agreed, stressing that the occupation’s means were more important than its ends.

We didn’t “go wrong.” Younger generations were robbed by older generations, in NYC for the second time. We’ve had a lot of progress. We have to concentrate of fighting to keep what we have, in the face of decisions by Generation Greed to send us back to the 1970s. The charts in this spreadsheet say it all we are bankrupt. And the growing demands for services for seniors are on top of this.