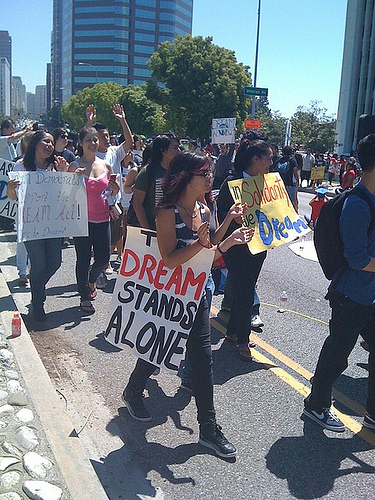 Juan Escalante discovered that he was undocumented in 2007. While he was applying to college, his mother revealed to him that his family’s visas had expired.

“My world just kind of shrunk in perspective,” he said. “I fell into a depression and I didn’t go to school that fall.”

Escalante and his family immigrated to the United States from Caracas, Venezuela in the year 2000 after his father was granted a work visa. Working with lawyers, the Escalante family was on their way to making a permanent transition to life in Miami, Florida.

“Our lawyers said we didn’t need to renew our visas anymore, that they could get us a legal permanent residence,” said Escalante, 23. “So we didn’t renew, thinking it was the best decision we could make, but guess what? Our application was denied and our case was closed without appeal because of our lawyer’s negligence. That’s why I’m trapped in this circle. We just fell into this grey area in immigration.”

Escalante, 23, said he turned to the Internet as a way to ease his mind and answer questions regarding his immigration status.

“My parents had some of the answers but they were very reluctant to explain the gravity of the situation to me, it was as if they were ashamed—like they had failed me,” he said.

Escalante found a forum, dreamact.info, which provides resources for undocumented youth. The site planned to expand and launch a national resource center after the failure of the Development, Relief, and Education for Alien Minors Act that fall in 2007.

“It just seemed so captivating to me, and I said I’ll become involved and volunteer,” he said. “The mindset was to allow a space for people who come to us, anonymous or otherwise, to give them the information or provide them with some sort of avenue to provide the information with no risk and without asking any questions.”
As social media sites like Twitter and Facebook have gained prominence in the public eye, Escalante and others like him have turned to the Internet as a platform to spread immigrant rights activism and awareness. Escalante is currently a part of DreamActivist.org, an online resource network by and for undocumented youth.

“The more I got involved with it, the more I gained an appreciation for this whole idea, or notion that we are able to use technology to spread a social movement without a huge budget or without us trying to cross every state,” he said.

The web site encourages undocumented youth to tell their story, while providing information and applications for immigration legislation such as Deferred Action for Childhood Arrivals (DACA), which grants work permits to qualifying undocumented youth and allows them to remain in the United States for a limited period of time. Unlike the DREAM Act, which would provide a path towards permanent residency, DACA provides reprieve for only two years after an individual’s date of approval. After two years, individuals must apply to renew their deferred action status.

As President Obama and a bipartisan group of senators prepare a plan for immigration reform and a pathway to citizenship for the nation’s 11 million undocumented immigrants, immigrant rights organizations are using social media as a tool to quickly connect the undocumented community on a national scale.

“We use social media very intensely,” said Celso Mireles, online strategy coordinator for United We Dream, the largest national network for undocumented youth. “One of the main things we engage people through in social media is the End Our Pain program.”

The program draws mobilization online to call attention to current deportation cases with the intent of stopping undocumented youth from being deported. The web site features a case questionnaire and application where undocumented persons detained by U.S. Immigration and Customs Enforcement (ICE) can seek to have United We Dream take on their case.

Mireles said the program is just one example of the power of online networks. Last month, when the mother and brother of prominent immigrant activist Erika Andiola were detained by ICE, the immigrant rights community quickly mobilized online to call on the agency to release her family using Twitter hashtags #weareandiola and #somosandiola to call attention to her case. Andiola’s family members were released promptly the next day.

Mireles, who just received deferred action, added that while there was some vulnerability in sharing your immigration status online, the risks were outweighed by the benefits.

Audio2-Mirelesundocumented
Mireles on being undocumented and unafraid

“Because she was so prominent in the DREAM movement she was able to mobilize a national network,” said Mireles. “I think without social media that would not have happened.”

“At the end of the day that the network we have built knows who you are and if something were to happen to you, that would act as a safety net should you be picked up,” said Escalante.

Escalante on Andiola and social media

Escalante added that the benefits of an online community went beyond the practical; there was a huge emotional component as well.

“A lot of times what people forget is that we use this as a coping mechanism, or at least we used to in the beginning because we didn’t know another undocumented person,” said Escalante. “We didn’t have network of support, it was actually very hard. Social media was kind of their for you.”

When Escalante first became involved with immigration rights forums and later Dream Activist, he was faced with his own dilemma on how much of his identity to share.

“In 2008 I started using my first name, in 2009 I started using my first and last name but I never alluded to the fact that I was undocumented,” he said. “By 2011 I was so sick and tired of trying to explain to people who I am, who I was and why I was affected and said you know what, it’s really time for me to let this go and face the issue with a strong face.”

Audio4-Escalante-IamwhoIam
“I am who I am”

“There is that fear in the beginning of using your real name,” said Mireles. “I used a pseudonym in the beginning—I used Sergio. But we realized there’s more power in really being unafraid and that means letting people know who you are.”

Escalante said his decision has made him more confident.

“It goes back to that sense of confidence in the community that people crave often because you were silent, you were sitting in the shadows and not given a seat at the table, so for us to come out as undocumented and declare our status doesn’t just empower yourself and our community but also people who look up to you and aspire to help this movement,” he said.

[…] Undocumented youth use the Internet and social media for info and support :: Pavement Pieces. […]

[…] Silva, D. (2013). Undocumented youth use the Internet and social media for info and support. Pavement Pieces. Retrieved from https://pavementpieces.com/undocumented-youth-use-the-internet-and-social-media-for-info-and-support/ […]