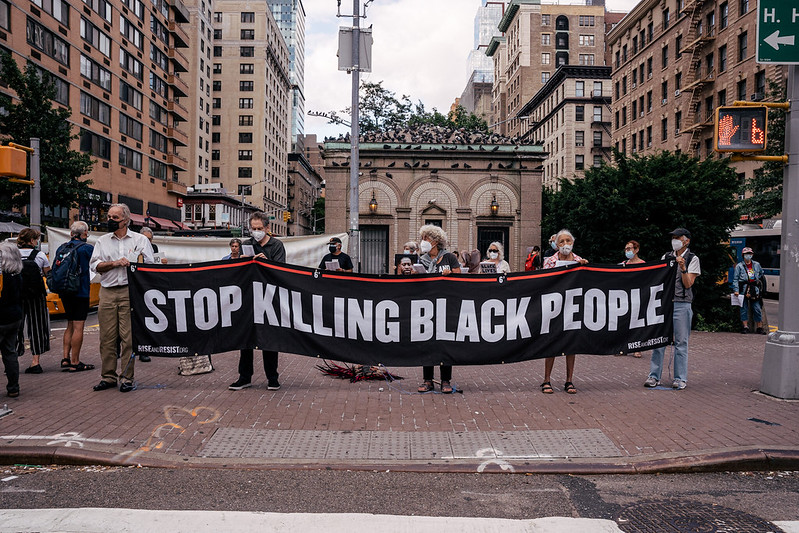 People at “Say Their Names” vigil hold up a banner that reads “Stop Killing Black People.” Photo by Nathan Morris

The vigil  started with the death of George Floyd and 466 days later, a banner that read “Stop Killing Black People” today was still held up by a group of predominantly white seniors across the street from the 96th street subway station in the Upper West Side.

They handed out sheets of paper with names to passersby and to those who joined in, but they did not want people to just read them. Instead, they wanted the people to say them. “Say Their Names” is a weekly vigil aimed to honor, remember, and say the names of Black people who were killed by police.

Ann Shirazi and Jenny Heinz, two members of Rise and Resist, an organization committed to standing up against hatred and discrimination, collectively decided to hold a vigil every Friday at 5 p.m. on 96th and Broadway. The idea is to provide neighbors in the Upper West Side a place to stand together and stand up for what they believe in without having to worry about public transportation and large crowds during the height of the COVID-19 pandemic.

“Things like this go off the front page so quickly,” Heinz, 77, of the Upper West Side said. “We wanted this to be an ongoing vigil for people to be able to say their names.”

Volunteers alternated reading the names out loud for the public to hear. After each name was read, Shirazi rang a bell to acknowledge that their name was said and heard. 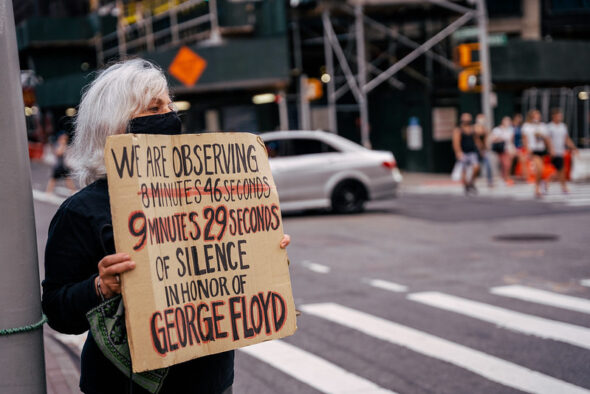 During a weekly Upper West Side vigil, Ann Shirazi holds a sign during a moment of silence for the amount of time that Derek Chauvin had his knee on George Floyd’s neck. Photo by Nathan Morris

“We wanted to humanize these people,” Shirazi, 76, of the Upper West Side said. “They were not just names that you read, but they were also human beings that had a life before they died.”

Phyllis Cunningham, 82, of the Upper West Side has attended the vigil since the start. She said it is an opportunity to become aware of police violence directed at Black people.

There were mixed reactions during the vigil. While some motorists honked their car horns in support, sometimes others react with anger.

“Occasionally we get a finger, and if we didn’t then we’d know we weren’t doing our job,” Shirazi said.

One time Cunningham had a woman ask her for the list of names she was handing out but when Cunningham gave it to her, the woman crumpled up the piece of paper and threw it in a tree. 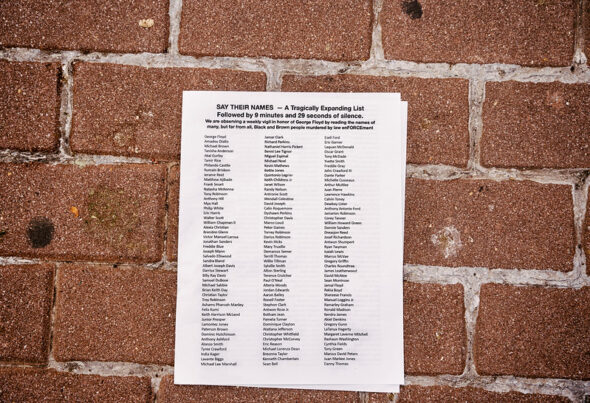 List of the names of Black people who were killed by police that’s handed out at the weekly Upper West Side vigil. Photo by Nathan Morris

“I would hope that when she got home, she thought about why she did that some more,” she  said.

Cunningham said that our nation is in one of the scariest times she could remember.

“I thought we made so much progress, but I honestly do not know where we go from here,” she said.

Heinz was not positive about the future of the country.

“I am sad about where we are now, and for the future of the people and our planet,” she said. “Anger has been trying to keep my grief at bay.”

Shirazi said she will keep fighting for change no matter how impossible it seems.

“I hate to say this, but I think things will get worse because sadly, people of color are easy targets,” Shirazi said. “Still, you are doing this when you know there is a possibility that you won’t change anything or that things could get worse.”

And she has a simple reason for not giving up.

“Because we can not,” she said.

Thank you for publishing this article on the vigil. It is a good account of this weekly event in which I participate whenever possible. There is a sense, on my part, of an act of atonement as names are read that over the weeks have become as familiar to me as those who like Eric Garner, Sandra Bland or George Floyd are now – tragically – household names. That our society has not stopped these killings is a crime we ignore at the cost of forfeiting our humanity and freedom.

“Vigil Honors Black Lives Killed by Police” – Ann, Jenny, Nathan, what a clear, meaningful showing and telling on this action! I hope it will be seen by many.

Thank you for shedding a light on an important topic that more Americans should be up in arms about.