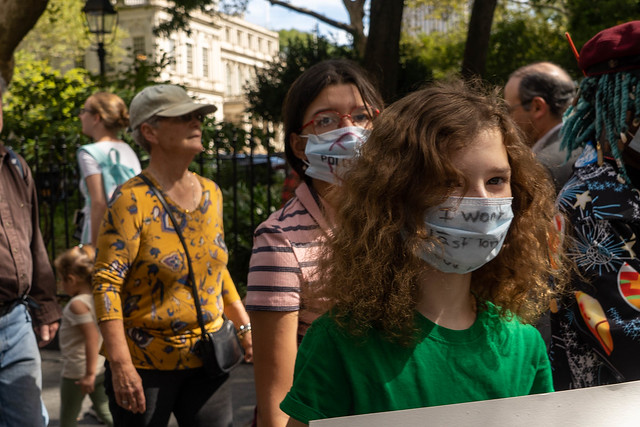 Today the streets of Manhattan were flooded with thousands of young people marching together in the fight against climate change.

They shouted “Hey, hey, ho, ho climate change has got to go,” and “Save the Planet.” Teenagers climbed up street posts to display signs calling for environmental policy reform.  Bystanders watched from storefronts as demonstrators in seemingly organized chaos migrated from Foley Square to Battery Park.

The march was a result of a movement orchestrated by 16-year-old activist Greta Thunberg, a prominent figure in the fight against climate change, to give her peers a chance to have their voices heard. It comes just days before the U.N. 2019 Climate Summit taking place in New York.

“I just think we need more awareness for people who don’t believe it or are unwilling to make a change,” said Anna Beckmann, a 16-year-old student at Columbia Secondary School in Harlem. “A lot of people say it is not going to make any change, but I think it is an important act of solidarity for our generation.”

Protestors gleamed with pride, holding up handmade signs, cheering and chanting as they made their way South on Broadway. Police lined the streets, forced to intervene only when a brave few climbed scaffolding for a better vantage point to view the sea of climate activists.

With the majority of the crowd in their teens, the calls to action that echoed through the streets were more so pleas to an older generation in hopes of creating a better future.

As marchers met at the end of Broadway which turned in the mouth of Battery Park, “Redemption Song” by Bob Marley played over the P.A. system. 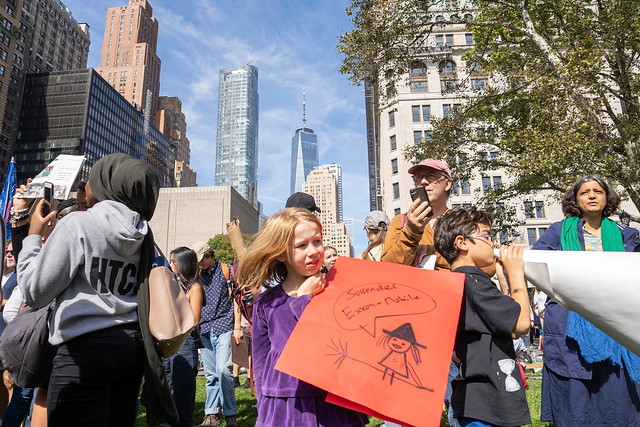 Activists of all ages flooded Battery Park in Manhattan to hear Greta Thunberg speak. Here, a young girl stands with her family just outside the entrance to the where protesters assembled. Photo by Thomas Hengge

“The climate summit is in two days, so we want to create enough of a spark to where we’re seen,” said Chole Giulini, 16, who traveled from Sandford, Connecticut to attend the march. “Our planet is dying. It is as simple as that. The results of the climate summit will determine what we do after this.”

On the lawn of Battery Park, the marchers came to a halt, and people gathered in front of a stage where Thunberg was set to speak. It was there the volume of people that showed up could be grasped. Hundreds, if not thousands, already filled the park as more poured in. People danced to the music blaring from the stage speakers, took pictures and found real estate to display the signs they made. 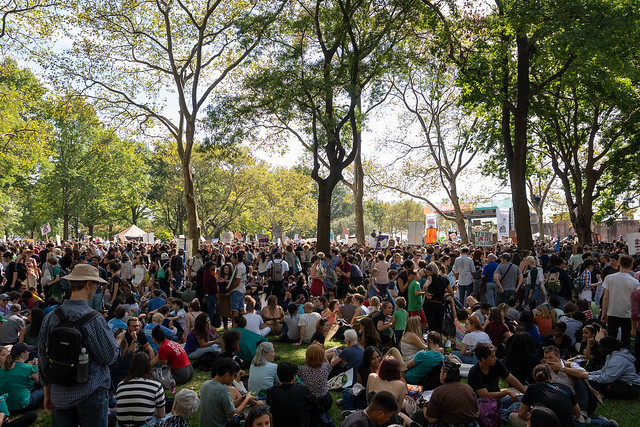 Some seized the opportunity to get a little more creative in an environmentally conscious way with how they chose to raise awareness.

Whatever form of activism was chosen today, the collective voice of climate activists was heard not only in New York but around the world as well. Thunberg’s speech was broadcast across the nation as well as in other countries. It is a moment younger generations hope perpetuates the change they believe is needed for a sustainable future.

“Even if the politicians don’t make a change for us right now, someday we will all care about this,” said Beckmann.