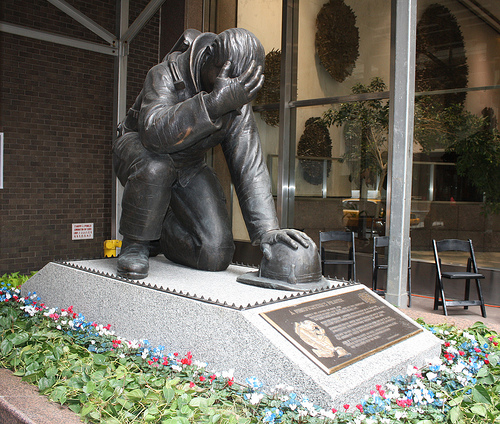 The sound of bagpipes bellowing “America the Beautiful” echoed up and down East 43rd Street yesterday, as people gathered to see the dedication of the only 9/11 memorial in Midtown.

“The Kneeling Fireman,” at 6 E. 43rd St. in Midtown is dedicated to the firemen, police officers and all first responders who served during the 9/11 attacks.

Being the only 9/11 memorial in midtown, it holds special value to New Yorkers.

Joe Garcia, 45, of the East Side of Manhattan, said he was there Labor Day weekend when the statue was first placed in front of Emigrant Savings Bank, its new permanent home. Garcia stood by Thursday as the dedication took place.

“I find it interesting that this is the only memorial in Midtown,” Garcia said.

What he found even more intriguing is how the statue found its home in the city.

The statue, which was originally commissioned by the Firefighters Association of Missouri, arrived in the city on September 11, 2001. The statue was going to be sent from New York to Missouri, but the manufacturers, Matthews International Corp. of Parma, Italy, decided after the attacks, that the statue should stay in the city perminantly and presented it to the Federal Law Enforcement Foundation.

The foundation accepted the statue on behalf of all the firefighters and citizens of New York and it has remained in the city the past 10 years in temporary locations, until recently when a permanent location was found.

“It seems like almost too big of a coincidence,” Garcia said, “I find it striking that the statue was made before and happened to be in New York on 9/11.”

Red, white and blue flowers line the statue’s granite base in front of the bank. Emigrant CEO Howard Milstein told the crowd he is proud to give the statue a permanent place because it has special meaning to him. He said he lost a close friend, Neil David Levin, director of the Port Authority, on 9/11.

Milstein said when the first plane hit the towers, he knew it was a terrorist attack and started calling friends and loved ones.

“I called my friend, Neil Levin and told him to get out of there,” he said.

Levin was one of the thousands lost that day, Milstein said with tears in his eyes.

Milstein dedicated the statue to the firefighters; “among the bravest of the brave,” he said, along with all the first responders on the scene.

“They made the ultimate sacrifice and that’s why we’re here today,” he said.

Firemen and police were among the crowd at the dedication. Joe Lapointe, who has 22 years under his belt as a New York fire fighter, said he thought the dedication was a beautiful thing.

Lapointe, 51, of Staten Island, has worked in ladder 114 in Brooklyn for the past 10 years.

“I don’t think if you live in New York, you’ll ever forget,” Lapointe said.

He said memorials like this one help everyone to remember all the brave lives lost.

People walking by, stopped to watch the dedication and view the statue. Zoe O’Brian, who works as a secretary nearby, leaned against a metal police fence and watched the scene just before the dedication began.

O’Brian, 27, of Fort Greene, Brooklyn, went to boarding school in New Jersey so she was not in New York on 9/11. She said it was scary because she was there and her family was in the city. She said as time goes by, it seems people forget what it was like.