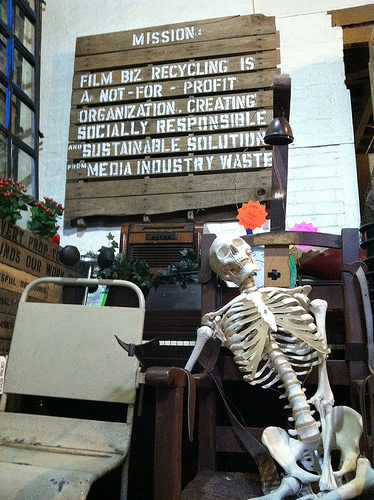 Film Biz Recycling is a not-for-profit based out of Gowanus, Brooklyn that aims to reduce and reuse waste created by the production industry. by Alyana Alfaro

Amid seemingly endless stacks of boxes and an array of random items—unused medical supplies, old towels, a sheet of plywood with over 50 stuffed bears haphazardly stapled on—Nicolette Stosur-Bassett shows off a colorful mermaid costume that, she said, was part of “one of the best clothing donations” she had seen in the past year.

Stosur-Bassett, 23, is the Director of Outreach and Development for Film Biz Recycling, an organization based out of Gowanus, Brooklyn that aims to find the best “second life” for items that would otherwise be discarded from the film, theater and production industries. For Film Biz, this means recycling, donating, selling and a creative reimagining of would-be discarded items.

“We kind of act as a way station in the film industry between what happens on set and what New York City can use,” she said. “We take in items, our staff spend a lot of time sorting them and thinking about the best possible second life for those items to have somewhere in the New York City community.”

According to David Hirschler, the Deputy Director of Waste Prevention for the Department of Sanitation of New York, over 16,000 tons of material are discarded in New York City every day. He said that, recently, reuse has become a major initiative for the city and that organizations like Film Biz Recycling help to “eliminate some of the stuff that would otherwise just be thrown in the landfill.”

And Film Biz recycling certainly has no shortage of “stuff.” The 11-thousand-square-foot facility is bursting with items —Stosur-Bassett says the only donation qualification is that items come from the production industry—and operates on a “no-waste platform.”

“We work with a metal scrapper and he scraps all of our metal including metal hangers and all that small stuff that usually gets thrown away,” Stosur-Bassett said. “We work with a textile recycler, with an e-waste facility. We make sure that everything that comes into our space goes somewhere else.” 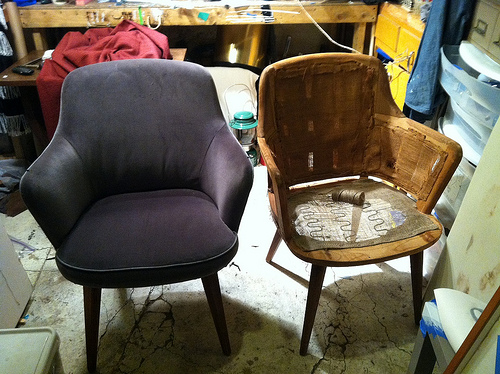 These armchairs are a donated set. The one on the right has yet to be up-cycled, the one on the left has been completely refinished with donated materials. By Alyana Alfaro.

Because Film Biz earns most of its operating budget from resale of donated items, last year, the organization started a new “creative-reuse” initiative to help move and sell some of the “less-desirable” things.

Juliana Obyrne, 23, is Film Biz’s professional up-cycler. Her job is to “make objects into other objects, fix things that are broken, and make things that are ugly more beautiful.” 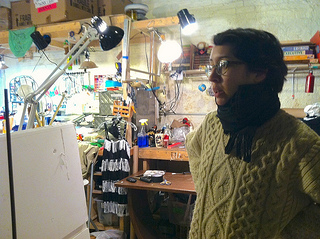 Juliana Obyrne, 23, is a professional up-cycler. She re-imagines donations to create new items to sell. By Alyana Alfaro.

“When we get donations in I can look though them and see if something has an interesting shape or potential,” she said. “All the furniture and all the supplies and all the fabric is from in-shop, otherwise it would just be in a dumpster.”

According to Hirschler, wood furniture makes up about 50 percent of the reusable material that is often needlessly thrown away and another 20 percent is comprised of old textiles. For Hirschler, up-cycling and resale of old items is a logical step to significantly reduce that number and, therefore, carbon emissions.

“Reuse is very important,” Hirschler said. “There is only so much recycling we can do so the Department of Sanitation really encourages people to rethink something old before they throw it away.”

Though Film Biz Recycling is not affiliated with the city of New York, Hirschler said the mission of the organization and others like it jive perfectly with the work of the NYC Center for Materials Reuse, a DSNY project dedicated to optimizing discarded materials.

“Reuse organizations are great,” he said. “DSNY does a lot, but we can’t take care of everything.”

For Bao-Khang Luu, owner of Releve Design, instructing New Yorkers on how to make items out of every-day discards has become a primary business component. In addition to creating lamps out of items like soda can rings, Luu creates DIY tutorials in the hopes to make people realize that up-cycling can be both fun an economically-savvy.

“Some people do it because it’s frugal or perhaps they are constrained by materials available to them,” he said. “The current popularity of up-cycling comes from two factors—the recession and the extension of the green movement. People are attracted to the money saving practice.”

According to Stosur-Bassett, the interest in reuse among New Yorkers is a trend that seems here to stay.

“We recently started doing some eco-classes and workshops and we see some real popularity and a lot of interested parents who want their kids to know about reuse,” she said. “Next week, we are teaching kids how to build a recyclesaurus.”

T-Shirt to Totebag Tutorial from Pavement Pieces on Vimeo.