Corn, carrots and the Inauguration 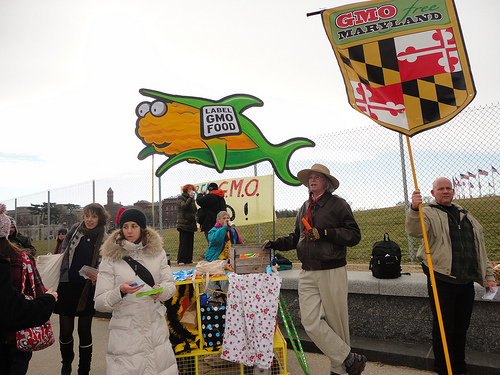 WASHINGTON, D.C.-While President Obama’s Inauguration speech focused on issues of equality and climate change, some of the few protesters at the Washington Monument had a less-expected talking point in mind: carrots.

Members of GMO Free Maryland, who lured Inauguration-goers to their stand at the foot of the Washington Monument with promises of free tea, coffee and natural carrots—along with blaring dance music—organized to “raise awareness about the labeling of GMO foods.”

GMOs, or genetically modified organisms, are plants or animals created through genetic “splicing” of DNA cross-species. In the United States, there is no law requiring the classification of these products in stores despite studies linking genetically modified corn to tumors and organ damage, among other issues, in rats.

For members of the anti-GMO Inauguration Day demonstration, the chance to spread the word about genetically modified foods to such a large group is what brought them to the Mall in protest.

Adam Eidinger, 39, of the DC area, was one of the main organizers of the demonstration. With a raccoon tail affixed to his pants, Eidinger stood, microphone in hand, calling those clustered around the nearby jumbotron to educate themselves about genetically modified foods and the lack of current government policies surrounding them.

“We want the government to require the companies who are marketing these products to disclose that there are combined genes from multiple organisms in these foods,” Eidinger said. “People who are eating these foods have no idea that they contain pesticides, that they contain herbicides that were integrated into the plants themselves.”

In 2007, at a speech in Des Moines, Iowa before he was elected president, Obama made promises that his administration would require the labeling of GMO foods because “Americans should know what they’re buying.”

Now, GMO Free Maryland, is pushing the President to remember this promise and, according to Eidinger, coming to the Inauguration was a critical step in reminding the President of his role for he future of GMOs.

“He is the administrative head of the FDA” Eidinger said. “All he has to do is tell the administrator ‘I want to label this food, I want rules on labeling GMO food’ and it happen in one year. He has not kept his promise to do this. We are hoping the second term will result in that. If we are here, we create leverage.”

Mike Snow is a D.C. based journalist who says that he was inspired to join the protest because he believes that “the mainstream media is ignoring the issue.”

“I feel very strongly about this issue because the government just completely ignores it,” he said. “In 2007, Barack Obama promised that if he was elected he would label GMOs but you look now and they are not here.”

For Eidinger, the most troubling part of the GMO issue is that the lack of labeling gives Americans have a limited awareness that these items are in the marketplace.

“I think the vast majority of people don’t know about GMO foods,” he said. “The companies can say it is a soybean but it is not quite the same as a soybean in the traditional sense. It is really gotten to the point now where people are getting sick in this country and they are allergic to this food and they have a right to know what they are eating.”

According to Snow, this issue is one that he could not ignore because of the possible health concerns associated with their consumption.

“We need to stop eating this junk,” he said. “The sooner, the better. Our longevity rate is going down. How did that happen?”