Dreamers continue to live with uncertainty as government shutdown ends 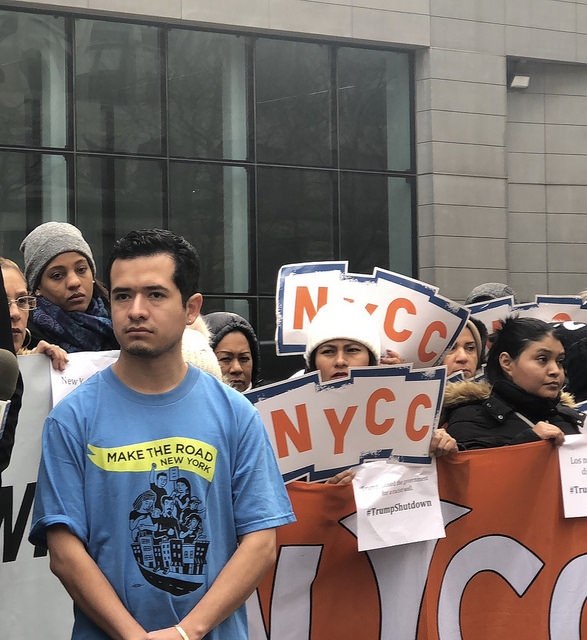 Ricardo Aca, on the left in blue, before he speaks to the crowd outside the Federal Building in downtown New York City. Photo by Farnoush Amiri

Ricardo Aca swayed nervously behind a cluster of microphones before he disclosed to the group of protesters, counter-protesters and press that he was a DREAMer, a status that he could lose in 10 months if congressional action isn’t taken. Aca was speaking at a rally in downtown New York City today in support of a clean DREAM Act, as the third and ultimately final day of the government shutdown began.

Six years ago, Aca was an undocumented immigrant working as a busboy at the Trump SoHo Hotel. Today, he has legal status and an associates degree in commercial photography. He is working towards a bachelors in international affairs at Baruch College. But with less than a year of certainty left and with Congress using DACA recipients as a leverage between party lines, Aca has decided to use his voice as his defense.

“We are here today because we condemn Donald Trump and congressional Republican leaders who have forced a government shutdown by insisting on Trump’s racist border wall and other anti-immigration policies,” Aca said.

Approximately nine hours after the rally, President Trump signed a bill that would reopen the government, funding it for the next three weeks and simultaneously putting a delay on legislative action for the DREAMers. This uncertainty has created a limbo for most recipients of the program and also puts those who are close to their renewal period ending at risk for deportation, which is why many of them have laid low in recent months. But not Aca, who interns at Make the Road New York, a public advocacy group for immigrant communities.

Aca is one of the nearly 800,000 recipients of the Deferred Action for Childhood Arrivals (DACA) program that was devised by the Obama administration in 2012 to allow for undocumented immigrants who entered the country as minors to defer deportation.

Under the current administration, the program has been used as leverage against the Democrats in exchange for reinforcing stricter immigration laws, ultimately leading to the government shutting down on Jan. 19.

“This is where I consider my home. I pay taxes over here,” Aca said. “This is where I go to school. This is where my family and my friends are and so for congress not to be able to come up with a fix that is more permanent is very upsetting.”

The 27-year-old came to the U.S. from Puebla, Mexico, when he was 14 years old. Aca’s mom had pursued legal routes to come to the country but when those failed she found a job as a seamstress in a factory in New York and later arranged for Aca and his younger sister to cross the border through Arizona.

“(Congress) doesn’t care about people of color or immigrants who come to this country to work hard,” said LaShonda Lawson, a speaker at the rally who works as a security guard at the Statue of Liberty. “America should stand for freedom and inclusiveness. That is what I think about every day when I go to work. I see hundreds of people come to the Statue of Liberty because she is a symbol of freedom.”

Most DACA recipients file for their renewal every two years in pursuit of that freedom. And at Monday’s rally, Aca shared what he and his fellow DREAMers have been doing since President Trump rescinded the program in September 2017.

“Instead of enjoying my life I have been constantly in the streets having to have my voice be heard because I know I deserve to be here,” Aca said. “This (amendment in the Senate) is only a temporary fix on a larger issue.”

Currently, the state of New York contains the third largest population of DREAMers, which has created a need for public officials and advocates to hold rallies, hearings and conferences in light of the recent attacks to the program. One of those officials leading the fight for young people like Aca is Carlos Menchaca, who serves as the city’s Chair of the Committee on Immigration.

“We are in front of Federal Plaza in New York City where New Yorkers from every corner of this city, like Ricardo, are saying one thing clearly: we want a DREAM Act now,” Menchaca said.