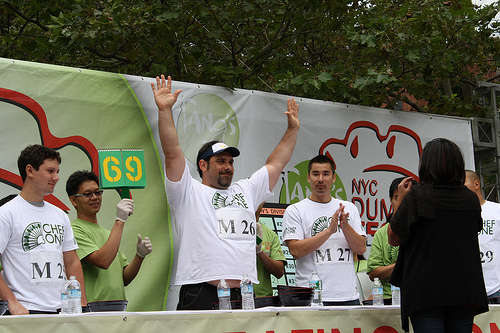 It really seemed as if everyone at The 3rd Annual Tang’s Natural NYC Dumpling Festival had died and gone to heaven. A succulent, sweet and spicy heaven.

The event, held at Sara D. Roosevelt Park Sept. 17 in the Lower East Side of Manhattan, featured a variety of foods such as lamb and potato dumplings from Elsewhere, the spiced apple dumplings of Ivy Bakery and Mediterranean inspired chicken liver ravioli via Bistro de la Gare.

“My favorite was the chicken momo,” said Leanne Bui, 24, of Bayside, Queens. “Everything here tastes phenomenal and inspires me to try and make my own dumplings at home.”

Terry Tang, CEO of TMI Food Group, and Debbie Kellogg, director of business development for the Food Bank For New York City, made opening remarks before the official dumpling-slicing ceremony kicked off the festivities, including two very steamy eating contests that put both contenders and the crowd in a frenzy.

An adjudicator from Guinness World Records attended to preside over attempts to set the “Most Dumplings Eaten in 2 Minutes” record. Contest rules were simple enough: no water, no condiments and competitors were to only eat one dumpling at a time, showing judges an empty mouth after each bite.

One eater used the strategy of time. Placing one dumpling in his mouth, rapidly chewing, then showing the judge he had swallowed was the key to his success.

“It was definitely difficult, but I am beyond happy that I got to set the new world record,” said 39-year-old champion Seth Grudberg, of Riverdale in the Bronx. “It pales a little in comparison to the other contest but it feels great.”

Grudberg triumphed over 11 other contestants in the race, indulging in 18 steamed pork dumplings to set the record.

“I don’t know how he did it,” said Brenda Oliveras, 45, of Austin, Texas. “It looks easy when you watch, but I’m sure if I was up there, I wouldn’t have done so well.”

The Chef One Dumpling Contest followed, and was divided into two separate challenges: one for men and another for women, bringing together a total of 50 competitors ready to devour and defeat. Some entered as a challenge brought upon them by friends and others just for fun and a free meal. But only one could leave full, satisfied and with the $1,000 check.

For the men’s division, 42-year-old Joseph Menchetti reigned supreme, breaking his record last year and winning with an astonishing 69 dumplings.

“I didn’t eat for 18 hours straight to prep for this,” said Menchetti of Cheshire, Connecticut. “It’s a speed contest that requires mostly natural talent and unfortunately this is my specialty.”

The champion added that although he has taken the lead for the past six years, he was a bit wary this time due to a sudden change in the menu.

“Last year we had regular dumplings and this year they switched to whole wheat, which is harder to chew, so I was a little anxious.”

Representing the women, six-time champion Floria Lee of Woodside, Queens defeated 20 other ladies and also held on to her title with a record 38 dumplings.

Second and third-place winners in both divisions each received $400 and $300, respectively.

The festival continued with Polynesian dancing by Lei Pasifika and festivalgoers continued to sample dumplings and mingle before calling it a day.

“This is my first time here,” said 30-year-old Sarah Nguyen of Harlem, Manhattan. “I love that there are different restaurants, not just Asian ones, that put their own spin on dumplings.”

She said that the festival’s good cause of benefiting the food bank also prompted her to attend.

“You don’t only get to feel physically satisfied in the end, but mentally and emotionally too knowing that your money is going to others that are hungry too and more in need,” she said. “That’s what is so great about this, everyone helps each other.”

thanks for the coverage – just one note there were only 12 people total in the contest so i bested 11 other people not 12. thanks again.

check out my clips at:

Thanks. I really like this articles on web site too. https://pavementpieces.com/muslim-voters-embrace-the-midterm-elections/