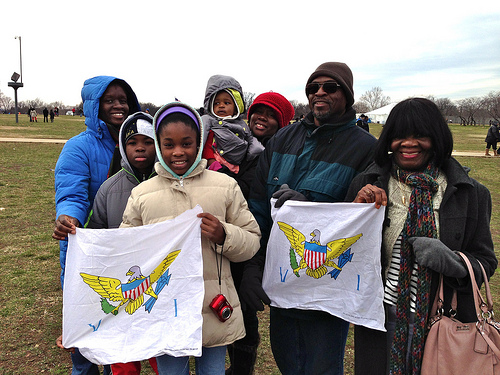 Four generations of the Lettsome family holds up the flag of the US Virgin Islands at the 2013 Inauguration. Photo by Breana Jones

WASHINGTON,D.C.-Amoya Lettsome will not remember this morning. She won’t remember the cold, the technical difficulties, or seeing President Obama sworn into office for his second term. At barely a year old, she won’t remember anything at all but her mother Stacy Lettsome, 40, of Atlanta, Ga. still wanted her to be present for the 2013 Inauguration.

“I will take the pictures and show her she is apart of history,” said Stacy Lettsome, “I was here four years ago so I’m honored to be back. It’s a great celebration and it happened on a perfect day, MLK day.”

Five other members of their family joined Stacy and Amoya Lettsome at the National Mall.  The Afro-Caribbean family was one of more than an estimated 700,000 present for the Inauguration. The crowd was nowhere near the size of the 1.8 million that gathered in 2009, and the majority of the crowd was black. The strong presence proved the significance of the President’s two term hasn’t been lost on the black community.

Amoya, 1, was the youngest and at 71, her great-great-aunt Lynn Igwemadu made four generations present. Tracy Lettsome, her sister, brought her children back for a second time, hoping they’d gain more understanding four years later.

“They’re in middle school now, so I want to discuss how we got here, why it’s so important,” said Tracy Lettsome, “and that because he’s in the White House, he might be dealing with a lot more challenges than presidents in the past because of who he is and where he is from.”

For Clarence Davis, 56, having so many generations of his family together was a special moment for the Virgin Islander, who said as an Afro-Caribbean seeing a black man sworn into the presidential office twice was a strong moment for him.

Stacy Lettsome said while she is happy her baby will grow up in a time where a black president is a reality instead of a lofty goal, she will be sure to teach her the history it took to get here.

“I want to make sure she lives to her full potential, that’s number one, and this is just another example of that history that she can reach any goal she wants,” said Stacy Lettsome.

“We’ve had a new addition since the last Inauguration,” said Davis. “The minute Obama won back in November we decided we were coming back to bring baby Amoya.”

Lynn Igwemadu, 71, came to the United States in the 1970’s to work for the US Virgin Islands’ first delegate in the House of Representatives Ron de Lugo. Working on Capitol Hill for so long, she said she’s seen a lot of inaugurations over the years but this one was the most important because President Obama was re-elected.

“This is history and we are writing history right here,” said Igwemadu, “I missed the first one but I wasn’t going to miss this one. The change is so phenomenal. I’ve seen so many changes, good things and bad over the years. To be here with my family, it is a pleasure and a joy.”