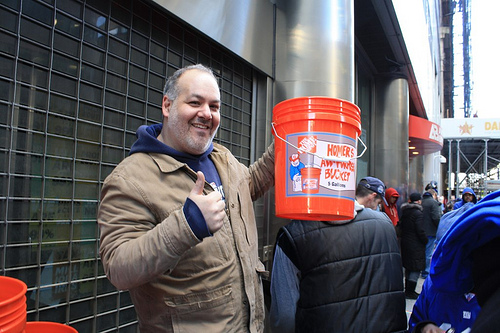 The Bucket Man Richard Sedotto sold hundreds of buckets Tuesday to Giants fans looking to get above the crowds at the Super Bowl Champion's ticker tape parade. Photo by Jamie Larson

While the New York Giants paraded up the Canyon of Heroes in Lower Manhattan this morning, Richard Sedotto was making money in buckets, with a business model so simple, passing Wall Streeters were praising his brilliance.

One look down the block and it was easy to see why. Almost everyone waiting for the parade at Broadway and Exchange Street were standing on a bright orange Home Depot bucket in an attempt to get a better view of the event, buckets Sedotto sold for $10 a pop.

In four hours of work, Sedotto and two friends sold nearly all of their 800 buckets.

“I’m sending my kids to college after this,” he sang to passers-by who scoffed at his price, then shouting. “I got the market cornered! 100 people have called me a genius. One more and I’ll believe them.”

A contractor from Long Island, Sedotto said he stands on buckets everyday in replace of a step stool. At the Yankee’s victory parade in 2007 Sedotto and friends brought a few just for themselves. After a number of fellow spectators offered to buy the pails from under their feet they realized they were standing on a goldmine.

They first sold buckets in New Orleans after the Saint’s Super Bowl win two years ago. Tuesday New York turned out to be much more profitable. Since, Sedotto has made selling buckets a loss-proof business.

“Say you only sell 400 buckets, then you just return the ones you didn’t sell,” he said. “You buy them on credit and you never spend any money.”

Another big part of Sedotto’s business model was heckling bystanders. His commodity was so hot, it seemed he could say anything.

“Hey, you’re short. You need a bucket,” he shouted.

The bucket man may now be popping up at more parades in more towns, from Philly to Boston to Chicago.

Steven Gorilik was supposed to be at work at the Colonial Insurance office on the other side of the street, but he couldn’t get across. He was so taken with Sedotto’s business he jumped on a bucket and helped with sales.

“This is the best business idea,” he said. “I’m going to be down on the next block at the next (parade).”

Sedotto said he’s not worried about competition because he had made so much money on just one block, pulling a thick wad of uncounted bills out of his coat pocket.

By the end of the parade there were discarded buckets everywhere, but Sedotto wasn’t interested in picking them up for resale; in fact he was gone well before the last float.

“It was well worth the $10,” said Frank Esposito, from State Island, who stood on a bucket with his girlfriend, Danielle Ballestero, on his shoulders. “I’m stealing his idea.”

But when the parade ended Esposito was left holding a bucket.

“Now what am I going to do with this $10 bucket?” Esposito wondered before turning around and shouting “$9 bucket.”

Hey, Way to Go BUCKET MAN!!! (cuz). You made more money yesterday than i did as an attorney practicing law. Maybe I’ll go into the bucket business…

And to the writer, NICELY DONE!!

What a great idea!!! genius indeed!!

did you make your kids go to school or did you break down and take them to the parade?

You ARE a genius. You made your idea work in both New Orleans and New York. With your innovative ideas and you personality you can make this work in any city. BRAVO !!!