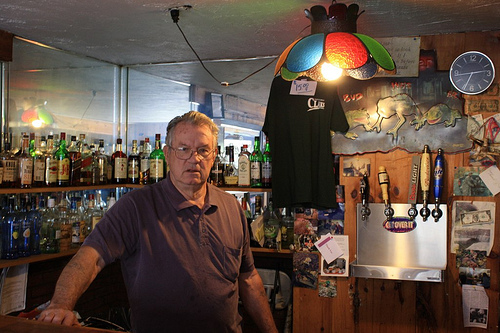 Ken Clark is a proud man. At age 72, he has made a living off his land, perched on a crest of the Catskill Mountains, in rural, upstate, Gilboa N.Y., for over 35 years. He said he’s never asked anyone for a hand out.

Clark’s neighbors, in surrounding Schoharie, Delaware and Greene counties, are proud too. They are also, as was evident during today’s New York State Republican Primary, resolute in their party loyalty. While turnout for the all-but-over primary was low, Republican residents said come November, they’ll all be at the ballots, to make sure anyone but President Barack Obama is in the White House next year.

The lifelong Republican said none of her party’s candidates stood out to her this year, which is a shame, because the last thing she wants is another four years of Obama.

“I just don’t care for the man,” Pickett said, “I thought he would be good in the beginning, but that all changed. He just wants to dictate to us.”

“(Obama) is a very smart man,” Clark said, “He knows exactly what he’s doing and that scares me. I equate him to some of the things I saw in Europe, with Hitler and Mussolini.”

On his steep plot, overlooking the Gilboa reservoir, which supplies one-twelfth of New York City’s water supply, Clark has, at one time or another, run a grocery, a hunting supply store, a hog farm and any number of other ventures. Currently, he runs an often-empty bar and restaurant off of Route 990V. It’s called Clark’s and he built it with his own hands.

Clark is worried, bracing for the disaster that he believes may unfold if Republican front-runner Mitt Romney doesn’t defeat Obama. He’s not sure exactly what horrors a second Obama term could bring, but he said it wont be good. He fears the president will breed a deep financial depression, spread communism, or maybe even start a race war, which Clark believes has already begun, as minorities take over job markets white kids now feel too entitled to work in.

Today, Clark said he would be voting for Romney in the primary because the former Massachusetts governor knows how to run a business. While Clark isn’t crazy about Romney, he doesn’t slight the candidate for his personal wealth, as others do.

“He knows how to create jobs. That is issue number one,” Clark said, “Name me one poor person who’s ever created a job? (Obama) is going crazy with these taxes.”

While upstate New York Republicans seem to accept Romney as their inevitable candidate, around the intersection of Greene, Delaware and Schoharie counties, none could be found with any strong feelings for the GOP’s hopeful.

“Oh, Newt Romney?” said four term Gilboa Town Supervisor Tony Vanglad with a laugh, “Yeah, I voted for Romney. I like him because he’s a businessman. He knows how to make a buck.”

She declined to say what she calls Obama. Holdridge and her sister-in-law/fellow poll watcher, Lula Anderson, said they liked Romney’s former rival and far right social conservative, Rick Santorum better. Anderson, in her 80s, said she is put off by Romney’s wealth and actually agreed with CNN Democratic Strategist Hilary Rosen’s much criticized statement that Romney’s wife Ann had, “never worked a day in her life.”

“(Ann Romney) hasn’t worked a day in her life,” said Anderson, “Rich people don’t raise their own children. They don’t clean their own houses or do their own shopping. I’ve worked for those kinds of people. I know.”

Nether of the sister-in-laws are confident Romney will win the presidency. Anderson said that in the end, both parties just say whatever it takes to get elected, then do whatever they want when they’re in power.

“They’re all dirty bedfellows,” Anderson said of Republicans and Democrats. “Their philosophies before the election are never their policies after the election.”

“I know one thing,” said Holdridge, “I think our party is going to screw around long enough that Obama’s just going to get re-elected.”

After finding out tuesday night that it was the N.Y.S G.O.P primary. I was very angry that not much was said about it.My wife works in the high school of our town and nothing was said about it. could it be the work of the dem. party? Maybe. I know i will pay more attention to what is going on. I thought i knew what was going on politically. i try not to miss anything. i am a registered conservitave.Iknow the progressive left is destroying America! We cant and must not let them continue.So dont make the mistake i made! lets get on the ball and take our country back in Nov. I feel like I jst sat back and helped the progressive left ! ! !