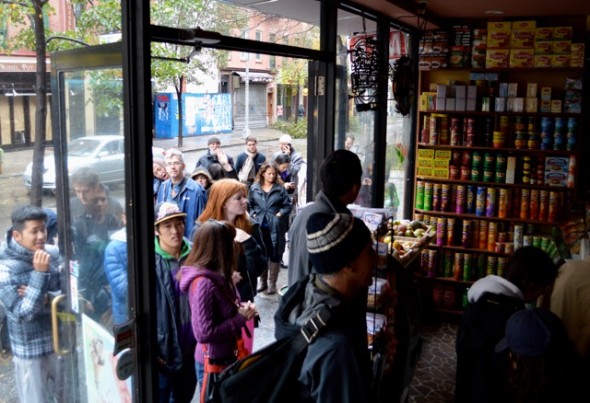 Crowds of local residents without electricity because of Hurricane Sandy, lined up to buy hot drinks and canned goods at Bleecker’s Finest Deli in Greenwich Village today. Photo by Mary Zarikos.

Bleecker’s Finest Deli may be the only open deli in Lower Manhattan after Hurricane Sandy struck the city last night.

The 24-hour deli at Sullivan and Bleecker in Greenwich Village was inundated with hundreds of locals from Soho and the Village buying egg sandwiches, hot drinks, and other canned goods in the early hours of the morning.

Due to a Con Edison explosion caused by Hurricane Sandy last night, all power below 29th street in Manhattan was wiped out.

“I don’t think anyone expected it would be this bad,” said Maryanne Lee, 52, of the West Village, who was lining up out the door. “I’m just grateful to find a hot cup of coffee to drink.”

The owner of the store, Hasan Alsharafi, 29, of Brooklyn, said he prepared for this by offering to pay his employees double-time and by setting them up in a nearby hotel late last night if they decided to work.

“We thought something like this might happen,” Alsharafi said. “Not many people have gas stoves at home to boil water. So we wanted to help out the neighborhood.”

Alsharafi drove over fresh goods like milk and eggs from another deli he owns in at 44th street and 10th Ave, where the power did not go out.

“I could replace what had to be thrown out this morning,” he said. “As a small business owner, I guess I have a unique advantage.”

What was a headache for residents, became a jackpot for small business owners like Alsharafi, who managed to sell out of most of his store’s canned, dry and packaged goods in a matter of a few hours.

“I’m lucky, but it wasn’t easy,” he said. “You won’t believe how many people tried to break into the store last night.”