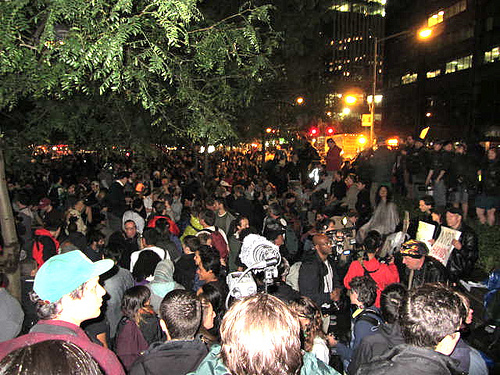 Zuccotti Park was overflowing with people this morning, as protestors celebrated a postponement of the cleanup that was scheduled by the park's management company, Brookfield Properties, and endorsed by Mayor Bloomberg. Photo by Chris Palmer

A euphoric, carnival-like atmosphere crested upon an overflowing Zuccotti Park early this morning, as Occupy Wall Street protestors celebrated news that a Mayor Bloomberg-endorsed cleanup of the park by its managing company, Brookfield Properties, was postponed.

Many protestors viewed the cleanup, which was scheduled for 7:00 a.m., as an excuse for the city to evict protestors from the park. When news spread that it had been postponed, deafening chants of “We are the 99 percent” and “This is what democracy looks like” echoed through Lower Manhattan as the sun rose between towering skyscrapers.

“This means we won this round,” said Jeff Smith, a 41-year old protestor from Washington Heights, holding a smartphone that displayed his Twitter feed, which was flooded with Tweets displaying the news.

“The bigger this gets, the more people, the harder it becomes to shut down,” he said.

“This is such a cliché, but I’m kind of speechless,” said Rami Schamir, 30, from Bedford-Stuyvesant, Brooklyn.

Schamir noted that protestors had spent much of the week cleaning the park with borrowed and newly purchased mops and brooms, and he thought the cleanup’s postponement was a sign of recognition that the occupation doesn’t need the city’s help.

“We did the cleanup, and we did it really, really well,” he said. “We can govern ourselves.”

Other protestors were a bit more guarded with their reaction, and some wondered whether this was just another move in a long game of chess between the city and the occupiers.

“I feel like it might just be a trick,” said Luke Gitar, a 28-year old from Bedford-Stuyvesant, Brooklyn.

Gitar said he thought that the postponement represented a small victory, but he was wary of potential action that Mayor Bloomberg might take to clear the park in the future.

“I think he hates this, and I think he’s pretty smart,” he said. “This was not the moment (for an eviction).”

Jay Sullivan, 30, of Kensington, Brooklyn, wondered if there was ever an actual plan to clean the park. But if there was a plan in place, he said, the postponement was probably due to the size of Friday’s crowd.

“I didn’t expect this many people to show up to defend the park,” he said while standing at the park’s north edge, where pedestrian traffic was bottlenecked to a snail’s pace.

The massive crowd chanted, danced to the beat of drums and listened to a variety of protestors preach victory and solidarity, and as the fervor escalated, some began to spontaneously march up Broadway to celebrate.

For one morning, at least, the protestors, who to this point had been defined by their feelings of disenfranchisement and powerlessness, were united by a sense of accomplishment.

“We’ve all worked really hard,” said Schamir. “This just shows (that) what we’re doing is right.”

It’ll be interesting to see if this was a planned maneuver as one of the quotes alludes. A large showing of solidarity for the supposed cleanup “wins” this morning, but the real cleanup happens unannounced when numbers aren’t as strong. It’s not too much of a stretch of the imagination.