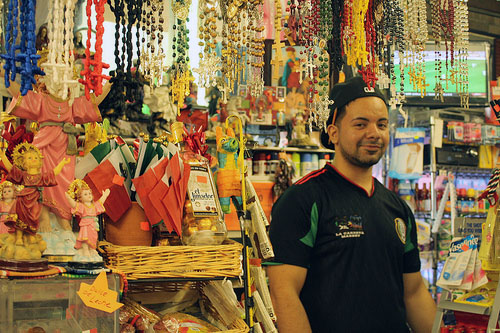 Jordan Velazquez, 20, stands behind the front counter at La Carreta Market in Detroit's Mexicantown. Velazquez said more aggressive border patrol enforcement has led to a decrease in business at the store. Photo by Kathryn Kattalia

For residents living in Detroit’s Mexicantown, stories of border patrol officers picking up illegal immigrants from stores and restaurants have become increasingly common—and businesses are starting to feel the impact.

Small storeowners, who are already struggling to keep up in a crippling economy, say they now face another challenge: they’re losing customers as more aggressive immigration law enforcement has scared many residents away from the neighborhood. 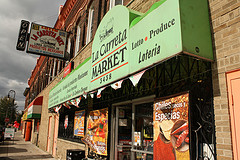 “People have a sense of fear like, I can walk out of my house today and maybe I might not be able to come back to my house tonight,” Velazquez said. “It has gotten worse.”

The Federation for American Immigrant Reform estimates there are nearly 200,000 illegal immigrants living in the state of Michigan. While experts say it is impossible to peg down the number of undocumented people in Detroit, the number of foreign-born residents has grown significantly in the last decade, from 137,769 in 2000 to 162,550 in 2008.

Over the last 10 years, more relaxed immigration policies have lured many undocumented Latinos to Mexicantown, a neighborhood that has been a regular magnet for immigrants since the 1950s.

But Angela Reyes, founder and executive director of the Detroit Hispanic Development Corporation, said that’s all starting to change. Immigration and Customs Enforcement officers in Michigan have become more zealous when it comes to sweeping the city for illegal immigrants, she said. Some people are moving to the suburbs where they feel safer. Others simply aren’t leaving their homes.

“It has been really oppressive to the point where they follow people to schools and churches, they’re waiting outside our organizations, raiding homes,” Reyes said. “It has had quite a big impact. Business owners notice because people are afraid of leaving their house.”

A bill proposed by state congressman Dave Agema to the Michigan House of Representatives in February would make it legal for law enforcement officers to demand documentation from anyone they approach for an offense or believe might be here illegally.

Agema said the bill, currently still in committee, would make it harder for illegal immigrants to stay in Michigan.

“Detroit and Ann Arbor have been a sanctuary in the state of Michigan which means if they get somebody that is illegal, they don’t turn them over to I.C.E.,” Agema said. “Basically they’re harboring criminals which is against the law and against the constitution.”

However, business owners say the increased law enforcement is having a negative effect when it comes to bringing in customers. Gloria Rosas, owner of Xochi’s Mexican Imports, said sales have dropped 50 percent since she first opened her colorful store on Bagley Street in the 1970s.

“Of course it’s the economy, but it’s also that people are leaving and are scared to come,” Rosas said. “You see people in churches and schools and supermarkets—they are scared of border patrol.”

On an overcast Saturday morning, Maribel Enriquez is one of the few people who can be seen out running errands on Bagley Street.

Enriquez, 26, who has lived in Southwest Detroit for most of her life, said she hasn’t just heard stories of people disappearing—she’s experienced it first-hand. Ten months ago, her stepfather was deported after being pulled over by police on Interstate 75.

“They’re deporting like crazy,” Enriquez said. “They’re getting people on the street.”

The result has had a paralyzing effect on everyone, she said.

“For a little while, I don’t think anyone went out anymore,” Enriquez said.

A spokesperson for the I.C.E Michigan office did not return phone calls for comment. However, officials have said that the push to crack down on illegal immigration in the state has focused on mostly on undocumented immigrants with criminal records.

In September, a nationwide crosscheck enforcement operation by ICE resulted in 58 arrests of undocumented people with felony convictions in Michigan, 18 from Detroit.

Velazquez said the tougher law enforcement has also made it harder for people without papers to find employment, and spending is coming to a standstill.

And in a neighborhood that’s already struggling to stay afloat, even legal residents are on edge, Reyes said.

“You just never know where (border patrol officers) are going to be,” she said. “Many people that I know of who are second, third generation, have been stopped and interrogated. I carry my passport with me everywhere I go because of that.”