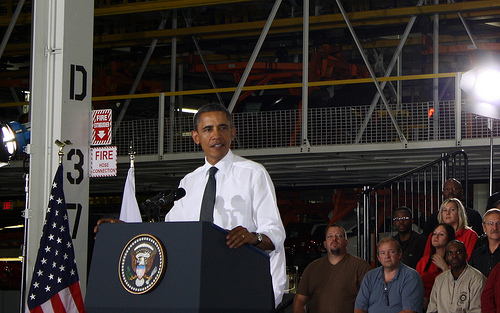 Standing in front of shiny new cars on a raised assembly line platform, at a General Motors plant near Detroit, President Barack Obama delivered a message of hope to a suffering city.

“This is a city where a great American industry is coming back to life and the industries of tomorrow are taking root, and a city where people are dreaming up ways to prove all the skeptics wrong and write the next proud chapter in the Motor City’s history,” the President said to the cheering crowd today.

Applying his famous slogan to Detroit’s deep, tangled problems of poverty, illiteracy, crime, and race, Obama said, “Yes, we can.”

“Times are tough and they’ve been tougher in Detroit than just about anyplace else. But we’ve made it through tough times before. We do not quit.”

Detroit has been the scene of extreme joblessness largely due to a cratering of the American auto industry who saw their domestic market share spiral down by 17% between 2001 and 2008 taking Detroit’s jobs with it. The city stands as one of the four worst metropolitan areas with an unemployment rate of about 13%.

The venue of the President’s visit to Detroit highlights a bright spot in this bleak landscape: The five-acre GM plant he toured employs over 1700 workers—jobs that were in jeopardy in 2008. The facility previously built heavier Chevy Malibus and Pontiac G6 models, and was slated for off-lining prior to Obama’s take-over and restructuring of Chrysler and GM early in his presidency.

“We made a deal with the auto companies, “ he said. “We said if you’re willing to retool and restructure, get more efficient, get better, get smarter, then we’re going to invest in your future — because we believe in American ingenuity,” said the President.

The Sonic is just the type of fuel-efficient vehicle the Obama Administration hopes more American car companies will turn to. There is hope that it, and cars like will kick-start the nation’s automotive industry. Priced at about $14,000, sales of the Sonic have been climbing and posing stiff competition to the Hyundai Accent.

These green shoots sprouting in the American auto sector mean renewed hope for Detroit—a reminder of the good times before the city’s population shrank by a fourth, before 40,000 acres of property were abandoned, and before the city’s literacy rate plummeted to 50 percent of the adult population.

But there’s still hope in this battered city. You can see it in the revival of downtown and midtown, you can see it in the urban farming that covers once desolate areas and in innovations like Tech Town. In the next few days Pavement Pieces reporters will explore the challenges and hope Detroit faces in a special multimedia report Rebuilding Detroit.

Serving as cheerleader-in-chief, Obama’s remarks were meant to fuel hope.