NYC Marathon: Running in memory of loved ones 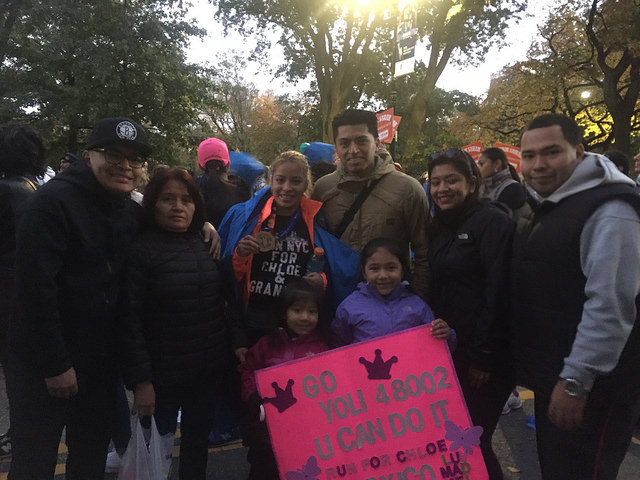 Yolanda Roman ran her first marathon today. She finished the New York City Marathon in about five and a half hours, but her time was not the first thing on her mind.

“I’m running for my daughter and now my grandfather.”

Roman’s baby daughter, Chloe, passed away from a brain disorder. It was shortly after her daughter’s death that she took up running, as something to hold onto and get through her grief. Her grandfather also passed away this year.

“It means everything to be able to run for her,” she said. “Everything. It was hard but I’m doing it for her.”

Roman’s brother, Juan Roman, came to cheer her on. The Roman family are lifelong New Yorkers. They live on 62nd Street, just a few blocks from where they waited to meet Yolanda after the race. He waited with their mother Viviana and Yolanda’s boyfriend, Charlie Santos, at the family reception area after the finish line.

“I’m used to this,” said Juan Roman. “I was born in New York City, so I know the marathon, but this is the first year we’ve been involved. After my sister’s daughter passed away, we have a reason to be here. And she has a purpose to be here—her daughter and our grandpa.”

Juan Roman proudly explained that to get here today, his sister had to complete trial runs with qualifying times. She began her training schedule a year ago.

Their cousin, Sonia Ariza, and her husband, Eli Modesto, along with their daughters Madelyn,7, and Melanie, 4,, came from Brooklyn to support Roman. Madelyn and Melanie played and ran around while they waited to greet their aunt. Ariza and Modesto took turn holding high a pink sign with glittering letters spelling out, “RUN FOR CHLOE.” When Roman finally reached her family, she was greeted with hugs, tears, and congratulations.

“We saw her running when she ran through Brooklyn,” said Ariza. “We live in Brooklyn, so we wanted to watch her there, and then we came here to see her at the finish line.”

There were two moments along the 26.2-mile run that stood out to Roman. The first occurred during a difficult section of the race.

“In the Bronx, my leg started cramping,” she said. “It was cramping so bad and then I saw on the side of the path, there were Mexican people rubbing people’s legs. That helped me get through. And then, crossing that finish line,I didn’t believe it when I crossed the line. It was a good day. A good run. I’m so happy I finished and saw my family here.”

Roman’s spirit is strong. Even after completing the longest run of her life, she had no intention of resting tonight.

“We’re going to celebrate,” she said.

1 year later I finally find this article. Crazy to say last Sunday I finished my 2nd marathon with a time of 4:52:36, better than New York and I’m so happy and filled with emotions I got to do this again. For my daughter and also for my grandfather. There’s a purpose thank you so much for this article.