Still Occupying: Arrested once, but still not afraid to fight 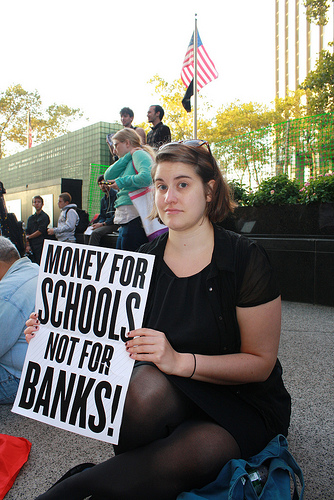 Rachel Smith was arrested last October protesting on Brooklyn Bridge. She's back this year, and still not afraid to fight against capitalism. Photo by Jordyn Taylor

Rachel Smith was arrested last October during an Occupy Wall Street protest on the Brooklyn Bridge. She spent 12 hours in jail. A year later she’s back, and ready to risk it all again.

Smith, 27, a student at the CUNY Graduate Center, got involved with the Occupy Wall Street movement last fall because she wanted to take a stand against capitalism. “Money for schools, not for banks,” read the cardboard sign she held on this morning. Rather than deterring her, the arrest made Smith even more determined to fight for her anti-capitalist cause.

“I was arrested, and I’ve been participating [in OWS] ever since,” she said.

A year after the arrest, Smith was still angered and driven by the unjust treatment she said she received from the New York Police Department on the bridge that day.

“The cops basically let us onto the bridge and then corralled us in on both sides and arrested everybody,” she said. “There was no point at which anybody told us we shouldn’t be where we were. I didn’t understand why I was being arrested at first, and they wouldn’t tell me. They just said I was acting disorderly. So it was just a bunch of bullshit.”

Smith was arrested in the afternoon, and spent the night in jail. While behind bars, Smith bonded with the other arrested protesters.

“They arrested like 800 of us,” she said. “They separated us by gender, so I was just there with women. We were in two to three person cells, and they kept bringing in more and more roomfuls of women. We sang, we talked. They were probably the best conditions under which one could be in jail. Cops suck, but the people I was with were excellent.”

Smith believed that the police purposely let her and the other protesters onto the Brooklyn Bridge last year because they wanted to make arrests. Along with her anti-capitalist goals, Smith was now looking to see changes in the NYPD.

“The Citizens’ Review Board is not functional, number one, “ she said. “Number two, I think there are some tactics that they use that are obviously unjust and wrong.”

Smith listed “stop and frisk,” “snatch and grab,” and “pen and arrest” as the NYPD tactics she most wanted to see eliminated.

“I don’t know how many of these things are institutional, that would be easy to change through policy, and how much of them are just embedded in the culture of the NYPD,” she said.

The danger of arrest might have been present again this morning, but Smith made it clear she was in the OWS movement for the long haul.

“Revolutions don’t happen overnight,” she said. “A lot of people have sort of gotten bored with OWS, and I think that’s really disappointing, because movements take a long time. “