Still Occupying: “God is with the Poor” 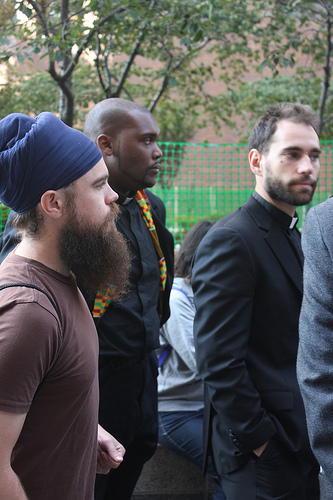 Retired Episcopal Bishop George Packard, one of the many religious figures who represent a national multi-faith coalition of religious leaders known as Occupy Faith, assembled a large crowd of protestors at Zuccotti Park this morning before police arrested him nearly 30 minutes later at the corner of Broadway and Wall Street.

“Part of the Christian message is that God is with the poor,” said Reverend Jeff Mansfield from the First Congregational Church Somerville UCC near Cambridge, Mass. “Usury is wrong.”

Mansfield not only attended the Occupy Wall Street events earlier today, but also showed support to Jewish occupy supporters by attending the Occupy Judaism event at Zuccotti Park last night. Members of the Jewish faith simultaneously celebrated Rosh Hashanah, the Jewish New Year, as well as the first birthday of the Occupy movement.

“It was a really positive experience,” said Mansfield. “There’s a variety of people of faith in the movement: Christians, Jews, Muslims.”

Eric Jackson, a minister at Judson Memorial Church in Greenwich Village and associate minister at First Calvary Baptist Church in Brooklyn, is also a member of Occupy Faith and said that the organization has a good Jewish representation.

“The faith community stands in opposition of global capitalism,” said Jackson. “It is a spiritual issue.”

Other religious figures not associated with Occupy Faith also attended the protests this morning, including Stephanie Shockley, an Episcopalian Chaplin at St. Luke’s-Roosevelt Hospital Center in Manhattan.

Shockley, who has been involved with Occupy Wall Street since October of last year, said that she’s noticed her appearance in religious attire has an effect on the temperament of law enforcement and demonstrators alike.

“Cops are reluctant to mess with me,” said Shockley. “I think I can remind cops that there is something higher to report to than their commanding officers.”

She said she notices initial suspicion among some occupiers, but has also experienced appreciation from some, including those who aren’t religious.

“For example, I know someone who is a definite atheist who will pick up the phone sometimes and say, ‘We could use some spiritual support,’” she said.

“Occupy Faith is a critical part,” she said. “They provide a moral voice. People need to see that presence in the Occupy movement.”

Bob Lindgren, a 58-year-old protester from Bayridge, Brooklyn said he is indifferent to the presence of religious figures in the movement.

“I don’t particularly feel the laws they are preaching,” said Lindgren. “I wish more of them would [show support] even though I don’t think too much of them will get involved.”

Minister Eric Jackson recognized that some within the church are still reluctant to join in Occupy Wall Street for “fear that they might run into opposition with their congregation.”

Lindgren, while openly nonreligious, said that he heard about Bishop Gregory Packard’s arrest earlier in the day. His response: “I think it’s wonderful.”

I appreciate the variety of people and views expressed in the article. Thank you for sharing.

[…] in Greenwich Village and associate minister at First Calvary Baptist Church in Brooklyn, is also a member of Occupy Faith and said that the organization has a good Jewish […]